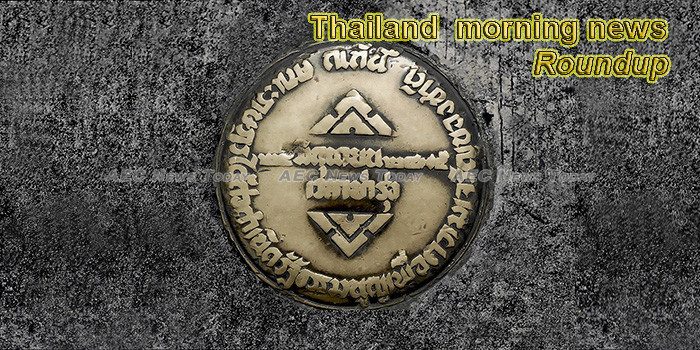 Australian newspaper reports on Thai minister’s criminal drug past
The Deputy Agriculture Minister Thammanat Prompow has had his accounts about his role in a 3.2 kilogram heroin-smuggling ring challenged by an Australian newspaper.
— The Thaiger

Minister Won’t Explain Heroin Conviction, Jail Time in Australia
A senior government official on Monday declined to address allegations that he spent four years behind bars in Australia for smuggling heroin back in the 1990s.
— Khaosod English

DSI chief expects Billy’s murder case to be concluded sooner than predicted
The Department of Special Investigation (DSI) is expected to conclude its investigation into the murder of Karen human rights defender Polajee “Billy” Rakchongcharoen much sooner than the 2-3 months previously anticipated.
— Thai PBS News

Government not tackling Thailand’s economic woes – poll
Most people regard the government of Thai PM Prayut Chan-o-cha as lacking the capacity to tackle economic woes – this, the latest results from yesterday’s NIDA poll.
— The Thaiger

Excise predicts B1.5bn from next phase of sugary drinks tax
The Excise Department estimates the second phase of the tax hike on sugar-sweetened beverages, effective from Oct 1, will contribute an additional 1.5 billion baht a year to state coffers.
— Bangkok Post

Gov’t Hints at Closed Session for Royal Oath Debate
The government said Monday that parts of an upcoming parliament debate on PM Prayuth Chan-ocha’s failure to complete his swearing-in may be held behind closed doors.
— Khaosod English

Weekend flooding threatens provinces in the Chao Phraya basin
The Royal Irrigation Department has issued an urgent flood alert for seven provinces as more water is released from the reservoirs feeding the Chao Phraya dam at Chai Nat province in central Thailand (map below).
— The Thaiger

Thailand worries mass tourism is bringing terrorism troubles
Thailand, popularly known as the “Land of Smiles,” is no longer smiling so much as fears grow that the rapidly rising inflow of tourists may be undermining the country’s national security.
— Nikkei Asian Review (paywall)

RCEP meet in Bangkok ends with no significant progress
Ministers from 16 countries negotiating for an Asia-wide free trade pact failed to make significant progress in a meeting Sunday held in the Thai capital, according to Japan’s representatives.
— Nikkei Asian Review (paywall)

Thailand and Vietnam fight to attract manufacturers
Thailand is discussing a raft of incentives to tempt manufacturers away from China, which is caught up in a damaging trade war with the US.
— HRM Asia

EU Ambassador upbeat on Thai FTA talks
The EU ambassador to Thailand said he was “optimistic” the long-delayed free trade agreement (FTA) negotiations will continue between Thailand and the EU at the 7th annual EU-Asean Business Summit in Bangkok.
— Bangkok Post

Turkish media, PRD to enhance mass communications cooperation
Members of the media from Turkey visited Thailand to exchange information with executives of the Public Relations Department (PRD) and to observe broadcast operations at the National Broadcasting Services of Thailand (NBT), marking the commencement of the radio and television content creation cooperation next year.
— NBT World (video)

Beverage manufacturers prepares for sugar tax
Starting October 1st, 2019, the Excise Department will impose a new rate of sugar tax that was first announced in 2017 to encourage the general public to consume less sugar. Manufacturers have reportedly reduced sugar content in beverages over the past 2 years.
— NBT World (video)

Thailand’s healthcare ranked sixth best in the world
Thailand is gaining worldwide recognition for the quality of its healthcare services, after the US magazine CEOWORLD placed Thailand sixth in its’ 2019 list of countries with the best healthcare systems, the Public Health Ministry said.
— Bangkok Post

Local monks help gather food for flood victims in Pattaya
Monks from Jittapawan Temple together with Nerntawan Meditation Center were gathering donations of dried food from locals in Soi Bua Khao for the flood victims donation in the Northeast of Thailand.
— The Pattaya News

HM Queen Sirikit returns to hospital for examination
Her Majesty Queen Sirikit, the Queen Mother, has been admitted to Chulalongkorn Hospital in Bangkok for follow-up examinations.
— The Thaiger

Censored and censured art student wanted Thais to see Buddha as hero (Photos)
One of Thailand’s top artists has come to the defense of a senior university art student who was forced to apologize for depicting the Buddha as a Japanese superhero.
— Bangkok Post

Fine Arts Department to display China’s terracotta warriors
The Department of Fine Arts is to put China’s Terracotta Warriors on display at the Sivamok Phiman Throne Hall in the Bangkok National Museum. An exhibition titled “Qin Shi Huang: The First Emperor of China and the Terracotta Warriors” will be held at the museum, starting September 15th.
— NBT World (video)

Flood waters reach Roi Et in Thailand’s north-east
Run-off from last week’s heavy rains around Khon Kaen and parts of the north-east, have now made their way to the province of Roi-Et, south east of Khon Kaen.
— The Thaiger

Drainage system work continues on Beach Road, more sections of road to close to traffic soon
A Pattaya City Officials have announced this afternoon that further portions of the road will be closed for construction in the coming weeks and months, including high season, causing potential traffic disruption.
— The Pattaya News