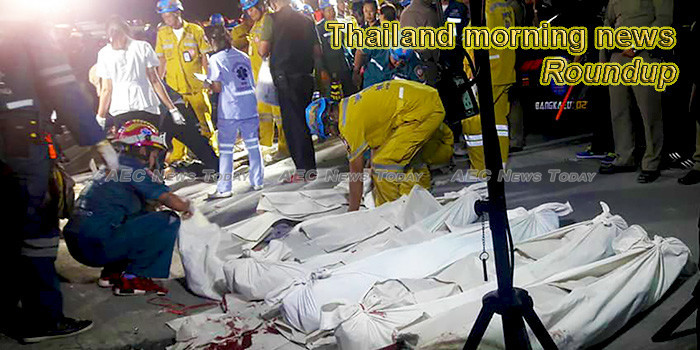 Thai PM says no Islamic State ties to Thailand as Egypt arrests student
The Thai student, who has not been identified, was taken into custody by Egyptian authorities on Sept 24 in Cairo after a video clip circulated online that showed him voicing support for an “Islamic revolution” in an interview.
— Reuters

Thailand expects jump in Chinese tourists in Golden Week after year-ago lull
While a recent rebound in the number of visitors from China, Thailand’s biggest source of tourists, is encouraging for the industry, its outlook is weighed by China’s slowing economy and a strong baht THB=TH, they said.
— Reuters

21st dugong found dead in fish nets off Phang Nga
Another dugong, the 21st this year, has been found dead, trapped in fish net in the sea off Khura Buri district in Phang Nga.
— The Thaiger

Herbicide ban row deepens
Rifts within the Agriculture and Cooperatives Ministry over a proposed ban on three toxic farm herbicides are deepening amid claims the minister urged his staff to restrict the use of paraquat, glyphosate and chlorpyrifos, instead of banning them completely.
— Bangkok Post

Draft bill to inspect e-bank transfers over 50,000 baht
The Deputy Government Spokesman Rachada Dhnadirek says the Cabinet has now approved a draft bill proposed by the Anti-Money Laundering Office (AMLO) to inspect electronic transactions exceeding 50,000 baht, in a move to combat money laundering and financing of terrorists.
— The Thaiger

Southern Thailand: Heartbreak of martial law
Rights group records 13,000 people were arrested since 2004 after imposition of martial law in the region
— YeniSafak News

Yamato backs product certification centres
Yamato, a major Japanese logistics company, expressed an interest in co-investing with Thailand to build “certification hubs” for agricultural products at airports in both countries, said Jatuporn Niemsuk, a director of the International Affairs Division of the Ministry of Transport’s Office of the Permanent Secretary.
— Bangkok Post

Latest RCEP meeting ‘very fruitful’, says government
The 28th round of negotiations on the Regional Comprehensive Economic Partnership (RCEP) in Da Nang, Vietnam on Sept 19-27 were very fruitful and led to the conclusion of 13 of the 20 chapters in the proposed free trade agreement, the Commerce Ministry said yesterday.
— Bangkok Post

Cabinet approves Amlo’s funds scrutiny draft regulation
The cabinet has approved a draft regulation which would allow financial institutions to scrutinise their customers’ sources of money, in a move to combat money-laundering and terrorist financing.
— Bangkok Post

Cabinet approves flood relief budget
The cabinet has approved a budget of about 2.28 billion baht to repair roads and other infrastructure damaged by two storms last month.
— Bangkok Post

Haze eases today with excessive PM2.5 particulate in only one district
The Pollution Control Department reported today that PM2.5 in Bangkok and its peripherals was measured at between 19-52 micrograms/cubic metre (microns), with Bang Kho Laem the only district with high readings, compared to 22 areas yesterday. The levels on Tuesday were the worst in the past three days.
— Thai PBS News

WETA backs community power scheme
The Waste-to-Energy Trade Association (WETA) has given its full support to the government’s Energy for All scheme involving community-owned power, as the programme will increase power projects fuelled by agricultural waste.
— Bangkok Post

Thais rally to save this bird trafficked to near-oblivion for its big, weird head
A big bird that wears its own battle helmet has nearly disappeared from Thailand thanks to raging illicit trafficking, and now a campaign is calling for action to save them.
— Coconuts (paywall)

Fine dust at fine levels
Fine dust levels dropped to moderate to very good levels in greater Bangkok on Wednesday morning, except in the capital’s Bang Kholaem district where the PM2.5 level was above the predetermined “safe” threshold.
— Bangkok Post

Civic groups doubt Democrat party’s stance on three controversial herbicides
Civic and consumer protection groups, which have been persistently campaigning for a complete ban on the use of paraquat, glyphosate and chlorpyrifos, have submitted a letter to the Democrat party leader questioning the party’s policy regarding the three herbicides.
— Thai PBS News

Tourist decline continues at Angkor
The number of foreign visitors at the world-famous Angkor Archaeological Park in Siem Reap continues to decline according to the latest figures from Angkor Enterprise.
— Bangkok Post

Record results at Medical Fair Thailand 2019
With 11,525 trade visitors from over 70 countries and 900 exhibitors, the recent staging of MEDICAL FAIR THAILAND 2019 in Bangkok, closed to record results.
— DOTMED.COM

QR Codes and Credit Cards Now Accepted on Some Bangkok Buses
Commuters can now pluck out their smartphones or contactless credit cards to pay for fares on more than 3,000 state-owned buses, the city transportation authority announced on Tuesday.
— Khaosod English

Anchored in Thailand
After years of anchoring inside South Pacific atolls–where tropical islands of sand and coral lie just a few feet above shimmering seas, and our tallest companions were rustling coconut palms–we’ve entered a new region, one of imposing scale and grandeur. It feels like we’ve wandered into the mythical world of King Kong.
— Cruising World

Actor Bin halts donations campaign after B422m raised for flood victims
Actor Bin Bunluerit has wound down the public donation campaign he launched in mid-September to help flood victims in this northeastern province, with contributions standing at more than 422 million baht as of Wednesday.
— Bangkok Post

‘Billionaire’ left his ‘pretty’ bride with B3.5m debt
The mother of a 30-year-old local woman who worked as a product presenter — locally dubbed a pretty — complained a man who described himself a billionaire left her daughter with a 3.5-million-baht debt for their luxurious wedding party.
— Bangkok Post

First Thai cave rescue movie premieres, promises to capture peril of the mission
From flooded passages lit by headlamps to urgent voices echoing off cramped walls, the director of The Cave – the first big-screen retelling of Thai rescue operation – promises to capture the peril of the mission when it premieres at Busan International Film Festival.
— CNA

Here’s Pope Francis’ Schedule for His Thailand Visit
Pope Francis will have an audience with His Majesty the King, meet PM Prayuth Chan-ocha, and holds two masses in Bangkok when he visits the capital next month, Vatican representatives said Wednesday.
— Khaosod English

Global problems, housing and land shortages : Is there a solution?
Bangkok, like other major cities around the world, is getting bigger, in terms of population. Bangkok has the highest population density in Thailand, with approximately 5.6 million people residing in…
— Thai PBS News

Online sales skyrocket in first half for Thailand’s King Power
Online sales and orders on King Power International Group’s Chinese-language portal have boomed in the first six months of 2019, according to the retailer and its website developer Jessica’s Secret.
— The Moodie Davitt Report

Top 10 tips to avoid food poisoning in Thailand, and cures (2019)
This information is provided as a general guideline if you are confronted with food poisoning.
— The Thaiger