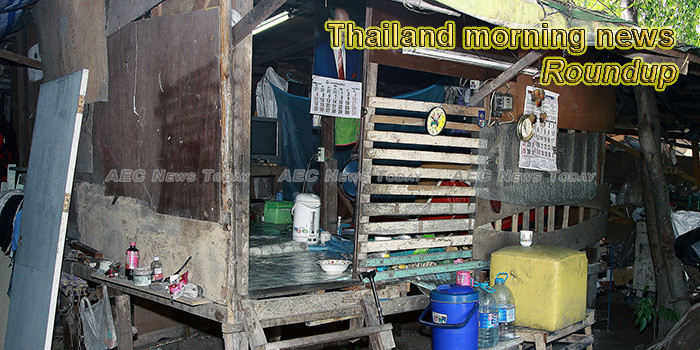 Dept pledges action over elephant deaths
A conservationist has ended his hunger strike after the Department of National Parks, Wildlife and Plant Conservation promised to meet this month to find a solution to the safety problem faced by wild elephants.
— Bangkok Post

VAT refund for tourists hiked to B30,000
The Revenue Department is set to raise the ceiling for value-added tax (VAT) refunds for tourists at downtown agents to 30,000 baht per traveller from 12,000 baht at present.
— Bangkok Post

UTCC advises more stimulus
The government needs to pump more money into circulation — a range of 30-50 billion baht — to reach the target of 3% economic growth this year, says the University of the Thai Chamber of Commerce (UTCC).
— Bangkok Post

Seripisut rails against budget bill, challenging its legitimacy
Defiant Seri Ruam Thai party leader Pol Gen Seripisut Temiyavet has rejected the budget bill, claiming that it was drawn up by an illegitimate government, led by a Prime Minister who did not recite his oath of office properly, as constitutionally required.
— Thai PBS News

Thailand’s army chief sees a commie conspiracy to topple the king
It was a speech worthy of Dr Strangelove. In a 90-minute lecture-turned-rant at the army headquarters on October 11th, Apirat Kongsompong, the head of Thailand’s armed forces, accused academics and other leftists of implanting “communist chips” in the minds of brainwashed youths.
— The Economist

VAT refund hiked to B30,000
The Revenue Department is set to raise the ceiling for value-added tax (VAT) refunds for tourists at downtown agents to 30,000 baht per traveller from 12,000 baht at present.
— Bangkok Post

‘Defence’ budget under attack
The opposition attacked government spending plans for favouring the Defence Ministry and imposing ineffective economic stimulus measures, as three days of debate on the budget bill began in the House on Thursday.
— Bangkok Post

Phuket Governor orders officials on alert as weather warning issued for Southern Thailand
Phuket Governor Phakaphong Tavipatana has ordered officials to be prepared for any situations arising from heavy weather following the Thai Meteorological Department (TMD) today issuing a warning for all of Southern Thailand as storms are expected to lash the east coast of the peninsular on the Gulf of Thailand over the next two days.
— The Phuket News

PM asks MPs to view national budget and government works as a whole
Prime Minister Prayut Chan-o-cha asked all MPs, as he presented the 3.2 trillion baht budget bill for 2020 fiscal year to the House of Representatives this morning (Thursday), not to just look at the budgets allocated to each ministry, but to consider the details of the work and projects to be undertaken by each, so they get an overall picture.
— Thai PBS News

Pheu Thai MPs warned of election blacklisting if they support Government
Opposition chief whip Suthin Klangsaeng warned this morning, ahead of the debate on the budget bill, that any Pheu Thai MPs who do not vote with the Opposition against the bill will be barred from contesting the next election on the party’s ticket.
— Thai PBS News

Chadchart’s dilemma underscores big political shift
Will Future Forward “surpass” Pheu Thai? The question is becoming glaring with each passing day, underlined by the apparent reluctance of Chadchart Sittipunt to run in the Bangkok gubernatorial election as a Pheu Thai candidate. Deemed a favourite in the city race, he seemingly does not want the “Thaksin factor” to scupper his chances in the last minute like Pongsapat Pongcharoen before him, but there must be something more than that.
— Thai PBS News

Thailand and Japan agree to develop automation tech
The Industry Ministry has begun a mission to bolster ties with Japanese businesses given the uncertainties surrounding Thai politics.
— OpenGov

Princess Sirindhorn in hospital for treatment of intestinal infection
Her Royal Highness Princess Maha Chakri Sirindhorn was admitted to Chulalongkorn Hospital today after she developed a fever and experienced some abdominal pain, the Bureau of the Royal Household said.
— Thai PBS News

Twin TAT campaigns aim to rake in B400m
The Tourism Authority of Thailand (TAT) plans to roll out next month two campaigns — Visit Thailand with 100 Baht and Shocking Price Weekday Travel — hoping to generate 400 million baht in tourism income over the remaining months of this year.
— Bangkok Post

UTCC: More stimulus necessary for 3% growth
The government needs to pump more money into circulation — a range of 30-50 billion baht — to reach the target of 3% economic growth this year, says the University of the Thai Chamber of Commerce (UTCC).
— Bangkok Post

Klong Toey revamp plan to hit cabinet this month
The final report on the 490-billion-baht development of the Klong Toey port area is expected to wrap up before the end of this month before it is tabled for consideration, said the Port Authority of Thailand (PAT).
— Bangkok Post

Judge Kanakorn Pianchana, another victim of the southern insurgency
Five men were awaiting the judge to hand down his verdict. Charged with murder and facing either life imprisonment or a death penalty, or being acquitted.
— The Thaiger

Thais could deny Rainsy visa
A senior Thai police official has said that Sam Rainsy, the “acting president” of the Supreme Court-dissolved Cambodia National Rescue Party (CNRP), would not be granted a visa if he intended to cause unrest in Thailand.
— The Phnom Penh Post

Thai opposition protests emergency troop transfer to king
Opposition members of Thailand’s parliament objected on Thursday to an emergency decree transferring two army units to the command of King Maha Vajiralongkorn, with one politician saying it does not follow the laws of the constitutional monarchy.
— CNA

Fish sauce excluded from Thailand’s proposed tax on salty foods
Thailand’s Excise Department and Public Health Ministry is considering a levy on salty foods in an attempt to tackle the sodium-rich diets of Thai citizens, and the health consequences.
— The Thaiger

Parks see influx as winter kicks in
The number of tourists visiting national parks in upper Thailand is rising as temperatures drop during the transition from the rainy to the cold season.
— Bangkok Post

Pattaya Temple warden accuses Nongprue Mayor of hitting him in the face, files police report, alleged incident caught on video.
A warden of Boon Sampan Temple has reported to local police after he was allegedly hit by the Nongprue mayor this week in public and caught on camera.
— The Pattaya News

ADB to invest in THB-10bn green bond in Thailand
The Asian Development Bank (ADB) will invest in a THB-10-billion (USD 330m/EUR 297m) green bond issuance that supports a Thai wind farm of 260 MW, it announced on Thursday.
— Renewables Now

Are We Alone in the Universe? Experts to Weigh in at Bangkok, Chiang Mai Event
World-renowned experts on aliens are beaming into the capital and Chiang Mai in November to talk about whether or not we’re really all alone in the universe.
— Khaosod English

Fitch downgrades DTAC’s outlook on leverage questions
Fitch Ratings has revised its outlook for Total Access Communication Plc (DTAC) to negative from stable to reflect expectations that the mobile phone service provider’s financial leverage by the year-end will increase to a level that is not commensurate with current ratings.
— Bangkok Post

Thailand, Indonesia see growth in booking volume in Southeast Asia
As the demand for travelers to Southeast Asia intensifies, Thailand stands out from the crowd as the most popular destination in the region.
— PhocusWire