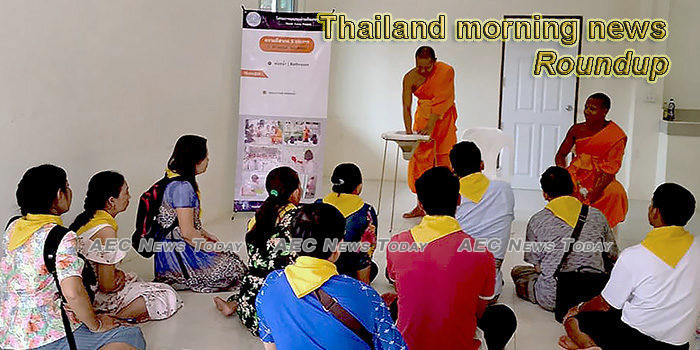 Most people expect PM to address economic problems
Most respondents to an opinion poll have high expectations that Prime Minister Prayut Chan-o-cha will take relief measures to address the high cost of living, which ranks top of the five economic problems of most concern to Thai people, according to a Suan Dusit Poll by Suan Dusit University.
— Thai PBS News

The slowdown hits home
If 2019 was already bad for businesses and policymakers, things may take a turn for the worse in 2020, as there are hints that an economic recovery is still out of sight, with a higher unemployment rate and shrinking factory production looming large.
— Bangkok Post

Labour Minister not concern about employment
The Labor Minister has dismissed concerns over the unemployment rate, following the closure of several factories, pointing out that there were new factories entering the market to offset the losses.
— NBT World (video)

US firms flock to BoI amid trade war
More US investors are keen to relocate their production bases to Thailand and Asean to stave off the impact of the prolonged US-China trade rift.
— Bangkok Post

13-year-old girl’s escape from forced marriage highlights the neglected issue of Thailand’s child brides
The Chiang Rai-based NGO Center for Girls has revealed that they have managed to help a 13-year-old girl escape a forced marriage with a 50-year-old man after the girl contacted them in March 2018.
— Prachatai English

Charter court asked to rule on House committee powers to summon people for questioning
The Constitutional Court has been asked to rule whether House or Senate standing committees have the authority to formally summon a person for questioning or to demand documents in the course of its investigations.
— Thai PBS News

Countdown to historic visit
The Catholic community is putting the finishing touches to their preparations for this week’s visit of Pope Francis ­– the second visit of a pontiff to Thailand in over 35 years following that of Pope Saint John Paul II in 1984.
— Bangkok Post

Bank clerk sacked for allegedly stealing millions, bank reimburses customer
A 34 year old Bangkok Bank clerk has been sacked amid claims she stole millions of baht from a wealthy customer.
— The Thaiger

Kingsgate gold mine arbitration with Thailand to be moved to Singapore
Kingsgate Consolidated Limited of Australia and the Thai government have agreed to change the location of the arbitration hearings over the closure of gold mine operations in Thailand, from Hong Kong to Singapore, due to the intensifying protests in the Chinese territory.
— Thai PBS News

Thai LCCs plead for fuel tax reduction
A group of five Thailand based low cost carriers have called on the government for tax relief to stave off losses.
— Travel Mole

British Council showcases innovations in Thailand
Interesting innovations from the UK are being showcased in Thailand, including a sensory testing room for food evaluation and eye tracking glasses to understand human behavior.
— NBT World (video)

Video Shows Police Handed Gun to Clerk During Court Shooting
Police on Friday said a policeman was placed under investigation after security camera footage revealed moments he handed his sidearm to a clerk during a deadly shooting incident on Tuesday.
— Khaosod English

SSF loans ‘just an idea’, insists Wissanu
The government has quashed rumours that the prime minister ordered the Social Security Office (SSO) to extend loans from the Social Security Fund (SSF) to subscribers, sparking fears this would hurt the fund and affect pension payments.
— Bangkok Post

Opinion: Is Thailand’s Vassalage to China Making a Comeback?
When Prime Minister Gen Prayuth Chan-ocha recently compared Thailand to an ant and China to a lion in front of Chinese Premier Li Keqiang in Bangkok, it raised a few Thai eyebrows.
— Khaosod English

Thousands of police deployed for Pope’s visit to Thailand, road closures and huge crowds expected in Bangkok
Some 6,000 police officers from the Metropolitan Police Bureau and Provincial Police Region 7 will be deployed to facilitate movement of traffic and provide security during Pope Francis’s three-day visit to Thailand.
— The Pattaya News

Grab v Get v Food Panda – Delivery apps battle for the streets of Thailand
Like hotel bookings, travel, airline booking, news, banking and music, the food delivery business is starting to transform the restaurant business too.
— The Thaiger

Behold, the Papal Pick-up – Thai popemobile revealed
In either a step down for the Pope or a coup for troubled car-maker Nissan, Pope Francis will take to the streets of Thailand in a locally-manufactured open-top Papal Pick-up.
— The Thaiger

Pope sends video message to Thailand ahead of visit
Pope Francis sends his greetings to the people of Thailand ahead of his visit to the country from the 20th to the 23rd of November, according to Vatican News.
— Thai PBS News

Dangerous spots pinpointed to tackle sexual harrassment in Bangkok
The “Safe Cities for Women” network has unveiled a risk map highlighting more than 600 spots in Bangkok and its vicinity including in educational institutions, where women could be at risk of sexual harassment.
— NBT World (video)

Ride Sharing Electric Scooters in Bangkok
Last month I wrote a blog post called My first experience with an electric scooter in Bangkok. It stirred up quite a bit of interest, both on my blog post and my Facebook page.
— Richard Barrow in Thailand

Call for all parties to find affordable alternative bio herbicides
An advisor to Thailand’s agriculture minister has called on all parties concerned to come up with affordable and environmentally friendly bio-substances to replace three recently banned hazardous farm chemicals quickly.
— Thai PBS News

Tourists warned not to disturb false killer whale seen near Koh Kood beach
Tourists visiting Bangbao Bay, on Koh Kood Island off Thailand’s eastern province of Trat, have been asked to exercise caution while swimming in the sea after a false killer whale (Pseudorca crassidens) was spotted swimming in shallow waters near the beach.
— Thai PBS News

Risks outlined by WEF are ‘controllable’, Commerce Ministry says
The government has brushed aside concerns about a Thai asset bubble and cyber-attacks in the World Economic Forum’s Regional Risks for Doing Business 2019 report, saying such risks are controllable with prepared measures.
— Bangkok Post

Local Pattaya residents flock to pray to a tree to win the Thai lottery
Always searching for a sign of good fortune, lottery gamblers flocked to a Sattahip coconut tree which they claimed looks like a Naga’s head.
— The Pattaya News

Police confirm death of American ex-fugitive Bart Helmus
Police have confirmed that the former American fugitive, Bart Allen Helmus, who broke out of court and shot himself when confronted by police, died on Thursday evening at 6 pm after falling into a coma at Sa Kaew Hospital.
— The Thaiger