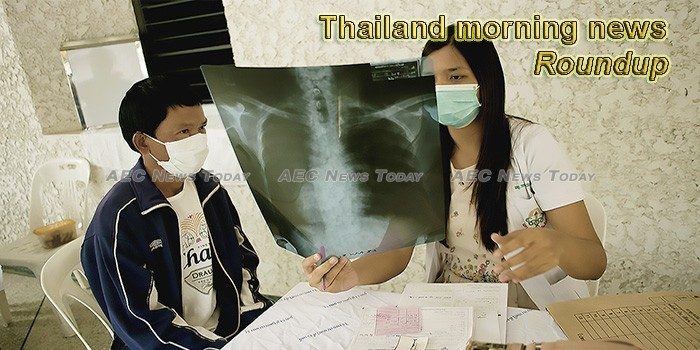 Thailand election: A vote for a hybrid democracy
The army had failed to do the job properly during the previous attempt, in 2006, one of the coup leaders told us in 2014. This time we will fix things so we never have to intervene again, he said.
— BBC News

How Thailand Became the World’s Last Military Dictatorship
If military dictatorship is defined in the strictest sense as the rule of a junta or military officer who comes to power through a coup and then doesn’t hold elections to offer a veneer of legitimacy, then Thailand is the world’s last military dictatorship.
— The Atlantic

Nation TV Airs Obviously Faked ‘Secret’ Thaksin-Thanathorn Recording
A broadcaster is facing a backlash for uncritically airing a doctored audio clip said to be a conversation between the leader of a popular progressive party and establishment arch-nemesis Thaksin Shinawatra.
— Khaosod English

PM Hopeful Abhisit Wants Constitutional Changes
The leader of Thailand’s oldest political party said Wednesday that if he becomes prime minister after elections on Sunday, he will make forceful but careful efforts to undo undemocratic provisions in …
— Khaosod English

Thailand to BAN booze in new election rule – and Britons who ignore could face prison
BRITONS will face a booze ban in Thailand this weekend. Authorities have suspended the sale of alcohol in a mandatory ruling, which will come into force for the Southeast Asian country’s election weekend on March 23 and March 24.
— Express Co

Thailand’s new leader must fix the environment
As Thais finally go to the polls on 24 March, there is growing concern among environmental specialists who have pointed out that political parties campaigning for the election have so far failed to present strong policies to ensure the protection of the environment.
— The Asean Post

Thungyai wildlife chief wants heavier penalty for Premchai
Speaking at a panel discussion jointly organized by the Seub Nakhasathien Foundation and environment reporters’ club today, Mr. Wichien said he and his immediate superior, Mr. Chaiwat Limlikitaksorn, director of the 10th Conservation Area Management Office, had discussed the 16-month sentence handed to Premchai and both agreed that the verdicts and/or punishments should be appealed.
— Thai PBS News

Cabinet waives tolls for 8 days over Songkran break
Thailand’s cabinet has decided to waive tolls on the Bangkok-Pattaya and Bangkok-Bang Pa-in-Bang Phli motorways starting April 10 until midnight on April 18. This takes in the main Songkran break between April 12 – 14 and the annual ‘seven days of danger’. A Cabinet spokesperson …
— The Thaiger

Thailand’s Thaksin causes a storm in Hong Kong
A luxury hotel commanding sweeping views of Hong Kong’s picturesque harbor is rolling out the red carpet to host to a wedding bash this Friday to be attended by two self-exiled former Thai prime ministers and members of their powerful Shinawatra family clan.
— Asia Times

Departments trade data
The Revenue Department has linked its information with the Legal Execution Department to better chase down the tax liabilities of people who went bankrupt.
— Bangkok Post

National Geographic making documentary on Cave rescue in Thailand
After its adrenaline-filled entry won the Oscar for Best Documentary, National Geographic has begun production on a new feature about the foreign rescue divers whose perilous operation saved 13 trapped in a Chiang Rai cave.
— The Pattaya News

A year for residential end-user buyers
This year is the year for condominium end-user buyers, with many developers saying they will concentrate on clearing completed but unsold condominium inventory in response to weaker demand, partly due to the Bank of Thailand’s stricter mortgage requirement policy for second- and third-home buyers.
— Bangkok Post

Prosecutor Backtracks on Effort to Extradite Thaksin
A public prosecutor on Wednesday said an extradition request for fugitive former leader Thaksin Shinawatra can’t be made without a police request.
— Khaosod English

Teacher’s conservation dream comes true
Saraburi community wins fight to save its limestone mountain thanks to education on importance of nature.
— The Nation (very annoying popups)

Thailand Unsettled #4: The Deep South (with Deep South Watch)
How will the 2019 elections bear upon violent conflict in the Deep South?
— New Mandala

Thailand’s elections: stability, but growth for whom?
Thailand faces a day of reckoning on March 24, 2019. Not everyone is in favour of the military-led government of Prime Minister Prayuth Chan-o-cha extending its hold on power.
— Channel NewsAsia (video)

PM follows up on automotive and tire testing center project in Chachoengsao
Prime Minister Prayut Chan-o-cha followed up on progress of the Automotive and Tire Testing, Research and Innovation Center in the Eastern Economic Corridor (EEC) project.
— NNT

Thai Baht Weakening Due to Thailand’s Election and Struggling Economy
The baht, Asia’s best-performing currency, has weakened in the second quarter for seven of the past 10 years, partly due to foreign repatriation of Thai dividend payments and a seasonal fall in tourist demand, according to market participants.
— Chiangrai Times

CGD: Welfare cards can be used to pay for BTS fares
The Comptroller General’s Department (CGD) disclosed that holders of welfare cards, both the Mangmoom (Spider) and EMV (Europay, MasterCard and Visa) Contactless systems, can use their cards to pay for BTS skytrain fares at all stations, starting from March 15th, 2019, onwards.
— NNT

Khon Kaen EC ensures smooth general election
The Office of the Election Commission in the northeastern province of Khon Kaen has expressed its readiness to accommodate all voters coming to cast their ballot in the province on March 24th, while ensuring that the commotion that happened in various provinces around the kingdom during the early votings on March 17th, will be eliminated.
— NBT World (video)