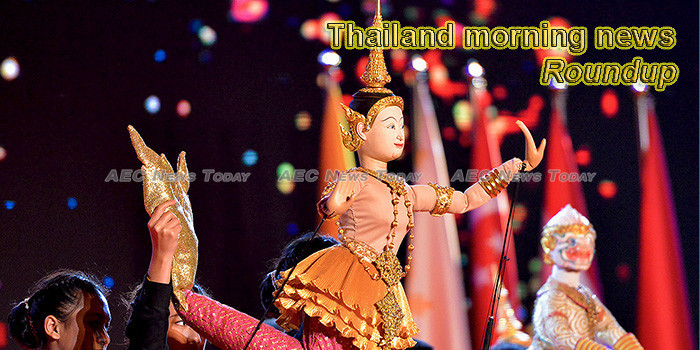 Opposition to grill the government tomorrow in first debate in five years
In what is touted as the first no-confidence debate in five years, the opposition parties will use the House sitting tomorrow (Wednesday) to grill the incumbent government and its ministers over a host of issues, ranging from the 20-year national strategic plan and reform of the justice system to Deputy Prime Minister Prawit Wongsuwan’s wristwatch scandal.
— Thai PBS World

Airport-rail link project; Map Ta Phut port project to be signed next month
The Eastern Economic Corridor Policy Committee has acknowledged progress in the high-speed rail project to link three airports and the Map Ta Phut industrial port development project. Contracts for both projects are expected to be signed between state firms and private concessionaires next month.
— NNT

Chinese buyers crucial to condo market
An oversupply is emerging in the Bangkok condominium market, which has led some developers to pin their hopes on selling more units to foreign buyers, especially Chinese who have become a major market in the last few years.
— Bangkok Post

‘Litter traps’ a success blocking trash from the sea
Twenty buoy-strung “litter traps” to be anchored at the mouths of rivers and canals along the Andaman Sea and Gulf of Thailand coast are expected to prevent 30 tonnes of trash reaching the sea every year.
— Eleven Media

Union wants rail bill scrapped
The Railway Workers’ Confederation (RWC) has slammed a draft rail transport bill which it says could make it possible for the privatisation of state rail services and infrastructure.
— Bangkok Post

FM Don advises Thanathorn not to talk about ASEAN
The minister was responding to Thanathorn’s comment, made in wake of the 34thASEAN Summit during the weekend, that ASEAN should drop its principle of non-interference in the affairs of member countries and, instead, should keep a check on one another in order to improve the lives of the people in the region.
— Thai PBS World

Share storm ruling threatens govt MPs
The Constitutional Court will on Wednesday decide on whether to accept petitions against 41 government MPs who are accused by the opposition of breaching the charter’s rule on shareholdings in media firms.
— Bangkok Post

Major staff cuts loom at BMTA
The debt-ridden Bangkok Mass Transit Authority (BMTA) plans to cut at least 5,000 employees as a result of its new restructuring plan endorsed by the cabinet on Tuesday.
— Bangkok Post

Cabinet is nearly ready, pledges PM
Prime Minister Prayut Chan-o-cha affirmed on Tuesday a new government will be in place by the middle of next month, saying background checks on would-be cabinet ministers were progressing.
— Bangkok Post

FTI seeks measures to rein in baht
The Federation of Thai Industries (FTI) is calling on the Bank of Thailand to launch new measures to rein in the baht’s rapid gains after the currency hit a more than six-year high, aiming to prevent the export slump from deepening.
— Bangkok Post

Handicapped and elderly get 3 million welfare cards
Over 3 million state welfare smartcards have been distributed to recipients, mainly the disabled, the elderly and bedridden patients, who registered in the added round for the state-sponsored subsidy and welfare scheme for low-income earners.
— Bangkok Post

Use of FTAs, GSP up 5% in first 4 months
The use of free trade agreement (FTA) privileges and the Generalised System of Preferences (GSP) by Thai exporters amounted to US$24.27 billion in the first four months of 2019, up 5% from the same period last year.
— Bangkok Post

NBTC mulls amount to make good with MCOT
The telecom regulator says it will settle on a compensation amount by September for the 2600MHz spectrum given up by MCOT for auction.
— Bangkok Post

Yang Ming Announces New China-Thailand Direct Service
Under the impact of rising global trade tensions, a relocation and adjustment of cargo flow and supply chains is expected. To cope with this trend, Yang Ming Marine Transport Corp. continuously strengthens its Asian service network as well as the quality of Asian routes.
— Sea News

Thailand targets turning into ASEAN power hub
A plan was set by Thailand, the permanent secretary revealed, to renovate its power transmission lines in order to transform into an electricity hub.
— MENAFN

China’s potash demand stirs resistance in rural Thailand
The future of a potash mine planned for north-eastern Thailand is mired in uncertainty as villagers put up fierce opposition, fuelled by concerns about their livelihoods, health and environment.
— chinadialogue

Qualifications of would-be ministers being examined
The Deputy Prime Minister, Prof. Dr. Wissanu Krea-ngam, said today that forms have been delivered to the would-be ministers so that they can fill out their details. He said their qualifications will be thoroughly checked by the Cabinet Secretariat, after many complaints on this issue were lodged.
— NNT

Bright TV 20 sets channel shutdown for Aug 16
Bright TV 20 is the third channel to announce a shutdown date of Aug 16 and will receive compensation of 372 million baht from the broadcasting regulator within 60 days of the shutdown.
— Bangkok Post

ASEAN leaders praise Thailand’s orderly ASEAN Summit hosting
Leaders of ASEAN countries have praised Thailand for hosting this year’s ASEAN Summit in orderly fashion, says the Foreign Minister, urging the public not to make a big deal out of a lack of translation devices for foreign media, as it is a problem which can be overcome in the future.
— NNT

Thai model launches picture books to confront sex education taboos
A Thai model who has spoken out about sexual harassment said on Tuesday that she will publish a series of children’s books to teach young people about sex in a country where sexual abuse is rarely discussed and teenage pregnancies have rocketed.
— Reuters

Banned. Thai airports cracking down what you can take on board
Thailand’s CAA (Civil Aviation Authority) is urging airports to more strictly enforce security regulations that would prohibit a longer list of things being taken aboard.
— The Thaiger

Charter amendment: Benefits, risks and difficulties
Charter amendment can reopen old wounds. Or it can create new ones. The former scenario will benefit the opposition, whereas the latter can play into Prayut Chan-o-cha’s hands. Either way, Thailand’s fresh constitutional controversy should come sooner rather than later.
— Thai PBS World

Smart Energy Expo 2019 being held in Bangkok
The Federation of Thai Industries (FTI) has assembled a group of energy experts to share their knowledge on energy management with industrial operators, in a move to improve their competitiveness and reduce energy costs.
— NNT

Heavy rains hit Phuket as weather remains in force
Heavy rains doused Phuket this morning, leaving areas across the island without power and traffic tailbacks on the major roads.
— The Phuket News

Charge against former red shirt dropped
A charge against a former red-shirt co-leader who later joined the pro-military Palang Pracharath Party has been dropped because the statute of limitations expired.
— Bangkok Post

Tourism-growth projected at 4.65%
The Tourism Council of Thailand expects 40.06 million foreign visitors this year, up 4.65% on last year, while tourism operators’ confidence is stable.
— Bangkok Post

Increasing the odds of survival
The Siriraj Stroke Centre has announced its mobile vehicle has treated 131 patients since its launch in May last year.
— Bangkok Post

Unclaimed cars will be towed, dumped
Old, unused private vehicles unclaimed by owners which are left on public roads will be towed away and dumped into the sea to make artificial reefs, said Prime Minister Prayut Chan-o-cha.
— Bangkok Post

U.S. Embassy in Thailand in collaboration with ICONSIAM
presenting music performance by the U.S. Air Force Band of the Pacific and the Royal Thai Navy Music Band Division on the occasion of Independence Day 2019 and in celebration of U.S. -Thai friendship on June 29, 2019 at River Park, ICONSIAM.
— Bangkok Post

Back in Fashion? Thai Traditional Dress and How to Pull it Off
Experts observed a renaissance of interest in traditional dress thanks to period dramas and market fairs initiated by the King.
— Khaosod English

Phang Nga’s waterfalls reopened after heavy rain
Phang Nga – Heavy rains in the southern region caused the temporary closure of Lumpi and Tonprai waterfalls in Phang Nga province on Sunday due to the risk of flash floods.
— Pattaya Mail

Thailand Morning News For May 3