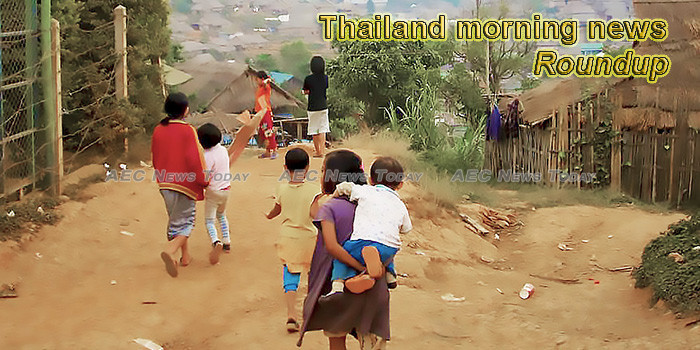 Thailand’s $13 Billion Plan Could Woo 65 Million Tourists Yearly
Thailand is already struggling to cope with the environmental impact of a tourism boom that’s expected to lure 40 million visitors this year.
— The Edge Markets

Government urged to mull host of wage hike factors
The new government is being urged to take into account various factors, including the country’s competitiveness and ability to attract foreign investment, when deciding on a hike in the daily minimum wage.
— Bangkok Post

Thailand tourist arrivals down 1.03% in May, Chinese tourists fall 8.55%
The Tourism Ministry of Thailand reported yesterday, June 20th, 2019, the following news in regards to tourism arrivals in Thailand and the news isn’t positive: -A total of a 1.03% drop in the total number of tourists year over year in May. -A total of 2.7 million tourists in May.
— The Pattaya News

Bangkok office market poised to change
Bangkok’s office supply totalled 8.95 million square metres at the end of the first quarter of 2019, an increase of 1.9% from the same period last year, according to CBRE Research.
— Bangkok Post

Thai cave rescue: boys of Wild Boars football team deal with fame one year after dramatic incident
A young football team made up mostly of poor or stateless teenagers entered a tourist cave complex in northern Thailand a year ago on a day trip, accompanied by their coach.
— South China Morning Post

Thai utility EGAT launches tender for 58.5 MW floating project
The state-owned Electricity Generating Authority of Thailand (EGAT) has issued an invitation for bids for a 55.5 MW (DC) floating PV project it intends to build at the Sirindhorn Dam, where the 12 MW Sirindhorn Hydropower Plant, is located on the Lam Dom Noi river in the Sirindhorn district of Ubon Ratchathani.
— PV Magazine

Thailand enters 5G technology era
The Thai Government’s National Broadcasting and Telecommunications Commission (NBTC) says it wants Thailand to be one of the first Asian countries to make the jump to 5G.
— Thailand Business News

Subsidies eyed to cut train fares
The Rail Transport Department is looking at using subsidies or tax measures to bring down fares on the city’s electric trains.
— Bangkok Post

Opposition Wants Junta to Explain How Senators Were Chosen
Opposition politicians said Wednesday they plan to file a motion urging the House Speaker to scrutinize the criteria used by the junta to select the 250 senators.
— Khaosod English

Ending decades of illegal fishing in Thailand
In a tightened up policing of their fishing industry Thailand has begun intercepting and inspecting fishing boats far out at sea this year, one of many new measures to curb its dangerously high levels of overfishing.
— Thailand Business News

Stress of return stalks Myanmar refugees in Thai border camps
Drastic cuts to humanitarian assistance for refugees who fled Myanmar for Thailand have stoked widespread “hopelessness and depression” in camps along the border, deepening a mental health crisis that has seen suicide rates soar, a coalition of civil society groups says.
— Al Jazeera

EVA Airlines flight attendant union goes on strike, over 100 flights canceled, including to and from Thailand
After failing to reach an agreement with EVA Air management, the Taoyuan Flight Attendants Union (TFAU) at 2:10 p.m. announced its EVA Air flight attendant members would go on strike, starting at 4 p.m. yesterday afternoon (June 20), leading to the cancellation of more than 100 flights on June 21, 22 and 23.
— The Pattaya News

Thai DLT to look at legalising GrabCar and GrabBike
Thailand’s Department of Land Transport is toying with the idea of officially legalising the Grab ride-hailing services using private cars and motorcycles through the Grab App.
— The Thaiger

Electricity billionaire building Tesla of Thailand
It’s the epitome of a closed circuit: the utility helping power one of Southeast Asia’s biggest cities is building electric cars, batteries and charging stations for the nascent market, and then supplying the juice to keep them all running.
— Bangkok Post

Thailand – end the unfair criminalisation of land rights defenders in Sai Thong National Park
Manushya Foundation (MF), Isaan Land Reform Network (ILRN), and the Future Forward Party (FWP) call on Thai authorities to stop the misuse of forest conservation laws and policies to criminalise impoverished villagers, to drop all charges against the 14 villagers of Sab Wai village, and to protect their rights related to land and livelihood.
— Prachathai

The Generational Challenge for Thailand’s Generals
Weeks after the March election, the plainclothes officers that had become a familiar sight on college campuses under military rule were back at Ubon Ratchathani University in Thailand’s northeast.
— The Diplomat

How many tourists visit the real Thailand?
Thailand is best known for its beaches, astonishing street food, markets and diverse south-east Asian culture. But how many people get out of the cities and tourist traps and get to experience the real Thailand?
— The Thaiger

Thailand Post issues ASEAN stamp collection
Marking Thailand’s ASEAN Chairmanship, the Government Public Relations Department (PRD) has joined hands with the Ministry of Foreign Affairs and the Royal Photographic Society of Thailand to create the “Pride of ASEAN” stamp collection, depicting the cultures and lifestyles of all 10 ASEAN member states across 20 stamps.
— NNT

PPRP asks court to dismiss media case against its MPs
The Palang Pracharath Party (PPRP) has asked the Constitutional Court to drop a case against its 27 MPs for allegedly holding media shares on a technicality.
— Bangkok Post

Russian Ambassador Denounces Sanctions, Urges Thais to Buy More Weapons
The Russian ambassador to Thailand is a youthful, physically stalwart gentleman who loves to praise the health benefits of winter – and who hopes that his host country will purchase amphibious aircraft from his home.
— Khaosod English

Eight arrested with drugs and firearms in Phuket
Eight suspects have been arrested, along with the seizure of 700 grams of crystal methamphetamine, 12,000 methamphetamine pills, guns and ammunition, in Phuket.
— The Thaiger

Two caught with 59kg of crystal meth in tyres
Two men have been arrested after 59kg of crystal methamphetamine worth at least 60 million baht were found in the tyres and secret compartments of their pickup trucks at a joint checkpoint in Sangkhla Buri district.
— Bangkok Post

Inaction Preceded Crane Collapse That Injured 10 Schoolgirls
A crane that fell on an all-girls school and injured 10 students in downtown Bangkok had been operating illegally for weeks, police said Thursday.
— Khaosod English

Award-winning boutique developer, Nye Estate
While the real estate market in Thailand during the past couple of years has been somewhat sluggish due to the prevailing political situation, the competition among emerging and longstanding real estate developers remains excitingly tight.
— Bangkok Post

Celebrate Phi Ta Khon
The town of Dan Sai in Loei province invites all to its most famous cultural event, the Phi Ta Khon Festival where locals from several communities take part in fun-filled processions through the town while donning colourful ghost masks.
— Bangkok Post travel

Thailand travel: Krabi’s fascinating resort and where you must stay in Bangkok
It’s raining heavily. And by heavily, I mean it’s absolutely ripping it down.
— BirminghamLive

Monk on a Mission . . . Thailand Buddhist Monk Treks Through Armstrong County
A Buddhist monk from Thailand may be the first representative of his religious order to walk across the United States.
— The Kittanning Paper

Rowdy drinkers trigger pilot threat on Sydney to Thailand Jetstar flight
Passengers aboard a Sydney to Thailand flight faced an abrupt end to their trip after their pilot was forced to issue an extraordinary threat just hours into the flight.
— Perth Now

Rawai ramps up fight against dengue, chikungunya
The Public Health and Environment Division of Rawai Municipality this week continued to roll out its campaign to contain the spread of dengue and chikungunya across the southern end of the island with fogging of local villages and households to help prevent disease-bearing mosquitoes from breeding.
— The Phuket News

Electricity outage in Kathu
The Provincial Electricity Authority (PEA) has announced that the electricity supply will be temporarily shut off in parts of Kathu on Friday (June 21) as work is carried out on installing new high-voltage cables.
— The Phuket News

Exporters call for long-term rice vision
The new government is being urged to set a clear direction on Thai rice development, covering not just the short term but also the medium term and the long run to sustain the country’s cash crop.
— Bangkok Post