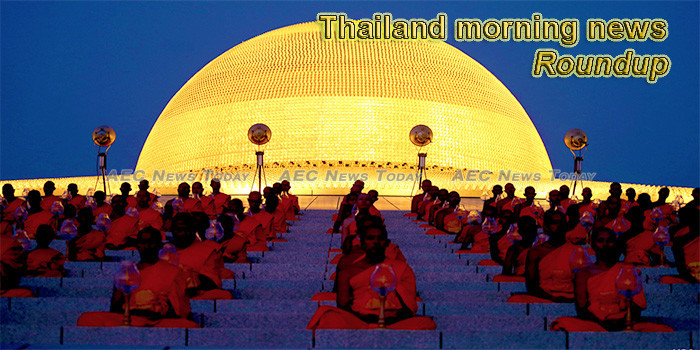 UPDATE: Thai PM tells Phuket people to “stop ripping off tourists”
Two Australians file their report with Karon police this morning Everyone is having their say about a van charging two Australian tourists 3,000 baht for a trip from the Phuket International Airport to Kata, even the Thai PM.
— The Thaiger

Philip Morris saga ‘not over’: Wissanu
Deputy Prime Minister Wissanu Krea-ngam on Thursday said the dispute involving Philip Morris, a multinational cigarette and tobacco manufacturing company, is “not over yet”.
— Bangkok Post

Labour Ministry opens automation center
The Ministry of Labour has announced the establishment of a human resources development center on automation and robots at the Institute for Skills Development 3, located in Chonburi.
— Pattaya Mail

Big Data plan for one-stop service for 200 transactions
The government is extending its One-Stop service enhancement plan using Big Data integration, which will allow some 200 different transactions to be made easier by requiring only a national identification card for verification of the customer.
— Pattaya Mail

With New Cabinet, Thailand Replaces Junta With Army Allies
Thailand’s new Cabinet was sworn in Tuesday, creating a nominally elected government after five years of military rule but keeping power in the hands of the same allies of the army.
— Khaosod English

New Tourism Minister stresses importance of safety for tourists, emphasis on sporting events
The Newly appointed Tourism and Sports Minister Pipat Ratchakijprakan says ensuring the safety of tourists is his most urgent task.
— The Pattaya News

FTI wants SSF waiver for workers
The Federation of Thai Industries (FTI) is calling for the Labour Ministry to waive the 5% contribution from insured workers to the Social Security Fund (SSF) for 6-12 months instead of increasing the daily minimum wage to 400 baht as promised during the election campaign.
— Bangkok Post

Project Inthanon heads to Phase III
The Bank of Thailand’s Project Inthanon Phase III, which involves interoperability among ledgers for cross-border funds transfer, is expected to start next month and conclude during the fourth quarter of this year.
— Bangkok Post

PM expresses concern about drought situation
The Prime Minister has instructed relevant agencies to help alleviate people’s suffering as a result of the current drought problem and called on citizens to use water sparingly.
— Pattaya Mail

Thailand tightens control of eight products
The Thai Government has tightened its grip on the movement of eight products on the new price control list to curb smuggling from neighbouring countries, shore up domestic prices and prevent a spread of crop diseases.
— Vietnamplus

PM calls on people to bring baskets to temples to reduce plastic bag use
The Prime Minister has encouraged members of the public to use reusable food carriers when offering food and other contributions to monks at temples, instead of using plastic bags and styrofoam boxes, in a bid to protect the environment.
— NBT World (video)

Thailand Post Implements Measures to Stop Drug Deliveries By Mail
Thailand Post has announced its imposing strict measures to prevent the deliveries of drugs and other illicit objects through its postal system.
— Chiang Rai Times

Thailand Industry Expo kicks off
The Ministry of Industry has organized an event aiming to strengthen Thai entrepreneurs, in line with the Thailand 4.0 policy.
— NBT World (video)

Labour Ministry opens automation training center
The Ministry of Labour has established a human resources development center on automation and robots at the Institute for Skill Development 3 located in Chonburi, as the Kingdom pushes its industrial sector towards the 4.0 era.
— NBT World (video)

World-Beating Currency Is a Big, Big Headache for Thailand’s Tourism
Thailand’s tourism minister has blamed a surge in the baht for sapping tourist arrivals into Southeast Asia’s second-largest economy and says he’ll take up the matter with the central bank, highlighting rising concern over the currency’s gains.
— Bloomberg (paywall)

Thailand’s Opposition Parties Aim to Amend Pro-Military Constitution
‘Without amending the Constitution, there will be no full restoration to democracy in this country,’ said Future Forward party leader Thanathorn Juangroongruangkit.
— VOA Khmer

Absent senators to receive meeting alerts
The Senate Speaker said clear measures have been put in place in the wake of criticism of a photo showing only a handful of senators at a recent meeting.
— Pattaya Mail

Domestic car sales down
Domestic car sales contracted for the first time in 30 months in June, down 2.1% from a year earlier to 86,048 units, after increasing 3.7% in May, the Federation of Thai Industries said on Thursday.
— Bangkok Post

BoT keeps options open
The Bank of Thailand says the impact of a policy rate cut to tame offshore fund inflows would be limited and it stands ready to enact additional measures if recent moves fail to contain the baht.
— Bangkok Post

TMD issues warning of heavy rain and thunderstorms resulting from ‘DANAS’
On Thursday morning, the Thai Meteorological Department (TMD) issued the 7th warning about tropical storm DANAS since Tuesday, saying it is likely to move, from the Philippines’ Luzon, north and north-eastward into the East China Sea.
— Thai PBS News

43 year old British man arrested over Phuket dog attack
Mervyn Harding, a 43 year old British expat, has ben charged over animal cruelty after he was identified on CCTV attacking a dog with a long rod on Tuesday morning (July 16).
— The Thaiger

New Tourism minister says strength of Thai currency is a “big headache”for tourism
Thailand’s tourism minister has blamed a surge in the baht for sapping tourist arrivals into Southeast Asia’s second-largest economy and says he’ll take up the matter with the central bank, highlighting rising concern over the currency’s gains.
— The Pattaya News

Flat fare eyed for electric train
The government has affirmed its intention to implement transport policies promised to voters by key coalition parties, including a policy to charge electric train passengers a flat fare of 15 baht per ride.
— Bangkok Post

2 Filipinos swept to sea, missing in Thailand
Two Filipino tourists have gone missing after reportedly being swept into the sea by high waves in Phuket, Thailand.
— The Philippine Star

Second hand car dealers arrested over 5 year old scam in Chiang Mai
Police in Chiang Mai say they have arrested a married couple involved in an alleged scam of 52 people in the northern Thailand city.
— The Thaiger

TIJ joins forces with five organizations to promote ethics and psychology for protection of children’s rights
The Thailand Institute of Justice (TIJ) joined forces with the Department of Special Investigation (DSI), the United Kingdom’s National Crime Agency (NCA), the children’s rights advocacy group ECPAT, anti-human trafficking group, A21 Foundation, and the German-Southeast Asian Center of Excellence for Public Policy and Good Governance (CPG) to host the “Child’s Rights Ethical Standards and Psychological Analysis for Law Enforcement Workshop” to enhance law enforcement professionals’ capacities on the rights of child victims, witnesses and psychological analysis, and to develop a draft code of conduct for the treatment of child victims and offenders.
— Bangkok Post

Armed forces back new govt
Armed forces leaders have thrown their full support behind the new government, saying the military is ready to serve as a tool to solve problems and respond to government policies.
— Bangkok Post

Hot weather to feed Thailand F&B sales in second half
Thailand’S consumer sector will be led by food and beverage in the second half of 2019, on relatively strong food inflation and a pick-up in drinks consumption, a report has said.
— The Business Times

Praewa’s mother assures the families of victims will be fully compensated
About nine years ago, Ms. Praewa, then aged 16 years and six month and without a driving license, rammed her car into the rear of a packed passenger van on the elevated Don Muang tollway, killing nine people and injuring five others.
— Thai PBS News

Court boosts compensation for parachuting death
The Appeal Court has ordered additional compensation and funeral costs be paid to the family of one of two police cadets who died during a parachuting exercise in Phetchaburi in March 2014.
— Bangkok Post

UPDATE: Search for Filipinos lost off Freedom Beach, Phuket
Officials are still trying to push on with a search for two Filipino tourists who were washed out to sea by waves at Freedom Beach in Phuket last night around 5pm.
— The Thaiger

Rice standards to ensure quality
The Ministry of Agriculture and Cooperatives’ Rice Department has set standards to ensure even quality of Thai rice, and we have a special report about this topic from our correspondent Sirakij Pornbungird.
— NBT World (video)

PM concerned about drought situation
The Prime Minister has instructed relevant agencies to follow up on the latest drought situation and urged members of the public to use water sparingly.
— NBT World (video)

Thailand’s most beautiful metro station to open on July 29
The Mass Rapid Transit Authority of Thailand (MRTA) announced at Bangkok on Thursday that part of the city’s metro Blue Line extension, including beautiful Sanam Chai Station, will open for a two-month free run from July 29.
— Xinhuanet

Thai PM worried about country’s image after overcharging complaint by tourists in Phuket
Prime Minister General Prayut Chan-o-cha is concerned about Thailand’s tourism image after two Australian tourists filed a complaint with police that they were overcharged.
— Asia One

Aussie tourists ripped off 1,500 baht each for a van ride in Phuket
A Facebook post in the “Phuket People Voice” page has published the photos of two Australians who reported to Kaon police after being ‘ripped off’ in a van ride from the airport to their Kata hotel.
— The Thaiger

Bride dies, but her dream fulfilled
A 30-year-old bride’s dream of getting her pre-wedding makeup done by a professional was fulfilled although she did not live to see the result.
— Bangkok Post

‘Big Bad Wolf’ Book Sale Back With 3 Million English and Thai Books
Dust off your bookshelves because massive piles of discounted books are returning to Bangkok this August.
— Khaosod English