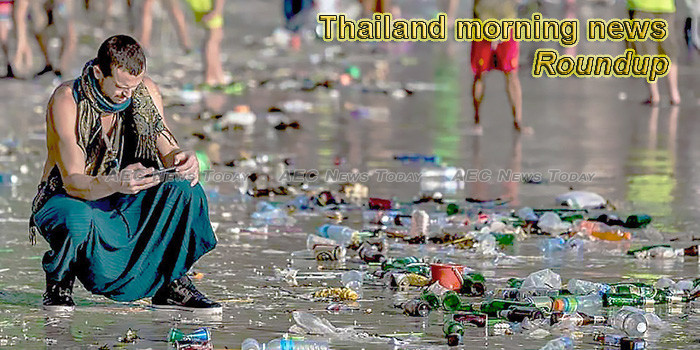 Boom along the border
A group of Chinese investors has poured in close to 10 billion baht to develop a new city in Thmada, a border village in Veal Veng district in Cambodia’s Pursat province — a project which, upon completion, is expected to change the dynamics of trade and tourism along the Thai-Cambodian border.
— Bangkok Post

20 smuggled Burmese, including children, found in locked Songkhla warehouse
by Santiparp Ramasutra Songkhla Police, in Thailand’s deep south, have rescued 20 scared and hungry Burmese, victims of traffickers who’d locked them inside a warehouse on the Thai-Malaysian border.
— The Thaiger

Drowning in a sea of plastic
Thailand is more aware than ever of the threat posed by plastic waste to the ecosystem and environment, especially trash in the oceans.
— Bangkok Post

Compulsory insurance for tourists eyed
Compulsory travel insurance for foreign visitors at a 20-baht premium each is expected to debut this year, according to the Office of the Insurance Commission (OIC).
— Bangkok Post

Thailand’s Second-Richest Man Saw His Worth Jump $1.7 Billion in 3 Months
Sarath Ratanavadi has vaulted up Thailand’s billionaire list to become the nation’s second-richest man, as his Gulf Energy Development Pcl outpaces most of the world’s power companies.
— Bloomberg

Democrats turn to ‘Avengers’ for inspiration
The Democrat Party recently unveiled its so-called “Economic Avengers” team, which is made up of nine people with knowledge and expertise in various economic fields.
— Bangkok Post

Bangchak launches Hi Diesel B20S to stimulate use of “Diesel B20”
Bangchak Corporation Public Company Limited has launched Hi Diesel B20S, another variation of the B20 palm-oil-infused fuel, which is part of the government’s policy to help increase the prices of oil palm by increasing its consumption through various projects.
— NBT World (video)

Bangkok-Cambodia trains will need time to gather steam
Thai and Cambodian trains will be only six kilometres apart on Monday — but tangible benefits from the new rail link are much further away.
— Bangkok Post

Cross Border Trade up 2.31% in First 5 Months of 2019
The Department of Foreign Trade (DFT) has reported that the total value of cross border trade rose by 2.31 percent in the first five months of this year.
— Pattaya Mail

Port fire probe unearths illicit ‘shoe’ haul
The fire that engulfed cargo containers at the Klong Toey port recently exposed a large shipment of crystal methamphetamine, or ya ice, waiting to be exported and dragged the reputation of the Seri Ruam Thai, an opposition party, through the mud.
— Bangkok Post

Grid or no grid, firms keen on renewables
SET-listed power companies are enthusiastic about capturing on- and off-grid power generation projects for renewable energy in line with global trends.
— Bangkok Post

Ministry targets aid to grassroots folk
The Finance Ministry is targeting grassroots people, particularly those in farming, as an urgent priority group to receive assistance after the new government is formed.
— Bangkok Post

Footage of Activist’s Assailants Released
A security camera footage released by an opposition MP shows moments of an attack on a pro-democracy activist, which still left him in serious condition Sunday.
— Khaosod English

Strong baht sends jitters through Thai export sector
Thailand’s private sector has expressed serious concern over the strengthening baht, which has rallied to its highest level against the US dollar for six years and may badly affect the country’s exports of agricultural produce and consumer products.
— Thai PBS News

No need for traffic courts, says judiciary
The courts of justice are likely to propose judicial procedures for handling traffic cases rather than setting up a specialised traffic court.
— Bangkok Post

Thailand, Laos sign road and rail deal
Thailand and Laos have sealed an agreement to upgrade a road and build a rail extension worth over 3 billion baht to boost cross-border economic cooperation, according to the Neighbouring Countries Economic Development Cooperation Agency (Neda).
— Bangkok Post

DPM Prawit expresses regret over brutal attack on Ja New
Deputy Prime Minister Prawit Wongsuwan has expressed regret over the brutal attack on political activist Sirawith Seritiwat, or Ja New, and ordered the national police chief, Pol Gen Chakthip Chaijinda, to hold an urgent meeting with the metropolitan police commissioner to discuss the incident and to intensify efforts to track down the perpetrators, as well as the mastermind behind the assault if there is one.
— Thai PBS News

Two suspects in custody after Surat Thani police officer killed during drug sting
Supapong Chaolan The body of a police officer, killed on duty during a drug sting in Surat Thani on Thursday evening, was repatriated to his home province of Nakhon Si Thammarat for religious ceremonies yesterday.
— The Thaiger

Pattaya CCTV System deemed a success, going to be introduced across the country
Earlier this week on our social media feeds The Pattaya News gave you a sneak preview of Pattaya’s 36 million baht CCTV system and command center.
— The Pattaya News

National Action Plan for Human Rights and Businesses Won’t be Mandatory
Thailand is working on a National Action Plan to encourage the private sector to respect human rights – but critics fear it won’t be effective if it’s not legally binding.
— Khaosod English

‘Pattaya Model’ to boost tourist safety
Police plan to introduce the Pattaya Model, a new set of crime prevention measures, in other provinces popular with tourists after success in finding a number of criminal suspects in this beach resort city.
— Bangkok Post travel

Thai version of international guidance for Comprehensive Sexuality Education (CSE) released
UNESCO Bangkok, together with the Embassy of Sweden, has released the Thai translation of the revised International Technical Guidance on Sexuality Education. Let’s find out more in this special report.
— NBT World (video)

UNESCO World Heritage Considers 3 Locations in Thailand
The 43rd Session of the World Heritage Committee commenced, with one of the key topics being three potential sites Thailand wishes to propose to UNESCO, for listing as World Heritage sites.
— Chiang Rai Times

Saha Group adjusts for longevity
Technology disruption and uncontrollable factors, both local and international, have prompted SET-listed companies under Saha Group, the consumer goods conglomerate, to rev up efforts to adjust and adopt new strategies to sustain growth in the long run.
— Bangkok Post

Commerce Ministry finds No illegal Seafood Imports
Officials of the Ministry of Commerce, the Department of Internal Trade, and the Department of Fisheries have inspected Talay Thai Market in Samut Sakhon province, after learning about rumors of the market offering smuggled seafood from neighboring countries.
— NBT World (video)

What to do with Thailand’s elephants?
The goring of an Italian tourist in February 2019, whilst elephant riding in Phang Nga, was just another sad example attracting focus on the practice of providing elephants for tourists to ride.
— The Thaiger