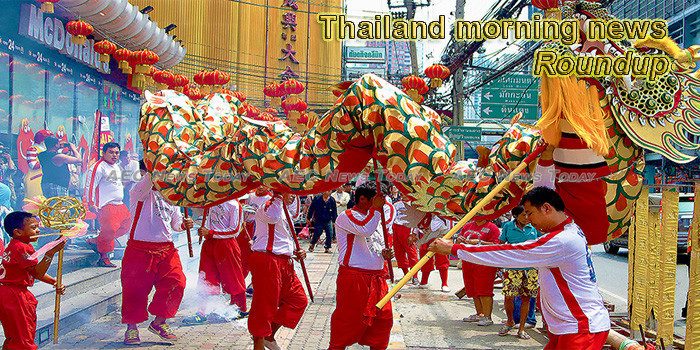 Cabinet informed of anti-PM2.5 plans
Bangkok – The Cabinet was advised on Tuesday of the short, medium, and long-term plans laid out by the National Environment Committee to address air pollution caused by particulate matter smaller than 2.5 micrometers in diameter.
— Pattaya Mail

Bahraini to make another bid for bail next week
BAHRAINI FOOTBALLER Hakeem al-Araibi will file another bail request while he awaits this extradition trial, his lawyer said yesterday.
— The Nation (very annoying popups)

A royal rumour upends Thai politics
IS THAI POLITICS about to turn upside down? For almost 20 years an endless political battle has pitted royalist elites, known as “yellow shirts”, against partisans of a populist former prime minister, Thaksin Shinawatra, known as “red shirts”.
— The Economist

BSR still in running for fast rail project
BSR Joint Venture, one of two contenders in the bidding for the high-speed railway project connecting three major airports, still has a chance to enter negotiations with the State Railway of Thailand (SRT)…
— Bangkok Post

MFA issues statement on Bahraini refugee footballer
The Ministry of Foreign Affairs (MFA) has issued an 8-point statement in response to criticism against Thailand in regard to its treatment of refugee footballer Hakeem al-Araibi.
— NBT World (video)

Over 10,000 cars busted for fumes
More than 10,000 vehicles have been busted over the past 12 days for emitting black exhaust fumes that exceed the safety limit, says the Department of Land Transport (DLT).
— Bangkok Post

Shameful behaviour by Thai authorities is being seen around the world
Is the junta in Bangkok aware of the extremely bad publicity it has generated for Thailand internationally with its apparently masochistic detainment – notably with medieval shackling, seen around the world thanks to global TV coverage – of an Australian refugee, a soccer player of Middle East origin, who did nothing wrong but come on holiday to Thailand?
— The Nation (very annoying pop-ups)

Trade war drags on export forecast
Thai exports are projected to grow by 3-4% at best this year, as the ongoing trade war is unlikely to end any time soon, economists told a forum on the spat.
— Bangkok Post

HM the King bestows necessities on Morgan village
His Majesty the King has graciously bestowed necessities upon members of the Morgan ethnic group badly impacted by a fire on Surin Island.
— NBT World (video)

Thaksin-linked political party is talk of Thailand amid premier rumour
A party linked to Thailand’s exiled former prime minister Thaksin Shinawatra is rapidly becoming the talk of the country amid rumours it will announce a shock prime ministerial candidate for March’s election.
— The Straits Times

Party big guns lay out promises
Four major political parties have vowed to combat social inequality and boost income distribution if given the chance to run the country after the March 24 election.
— Bangkok Post

Poisoning the land
The resignation of respected Chulalongkorn Hospital doctor Thiravat Hemachudha, together with two academics, from a panel tasked with toxic farm chemical control has revealed a malady in the country’s…
— Bangkok Post

Investigation ordered into disappeared Vietnamese blogger in Bangkok
The Immigration Bureau promised on Thursday to investigate the disappearance of a dissident Vietnamese journalist believed to have been abducted at the northern Bangkok Future Park mall two weeks ago.
— Bangkok Post

Somkid: Full speed ahead
Deputy Prime Minister Somkid Jatusripitak has called for state agencies to refrain from sitting idle for six months before the new government is installed to alleviate the impact from global uncertainties affecting the Thai economy.
— Bangkok Post

Ministry of Commerce pivots towards India amid US-China trade war
Amid global trade disputes and economic instability, the Ministry of Commerce has pivoted its export strategy towards India, which continues to see high demand for Thai products and services as well as investment potential for the Thai government’s Eastern Economic Corridor (EEC).
— NBT World (video)

Exports forecast to grow 3.26% in 2019
The Electrical and Electronics Institute forecasts the country’s shipments will grow by 3.26% to US$64.1 billion (2 trillion baht) in 2019 as major destinations — Japan, Southeast Asia and Europe — have healthy economic sentiment.
— Bangkok Post

In Thailand, election campaigning has a real case of military fatigue
As many as 10 parliamentary candidates from the Pheu Chart Party are named Thaksin and Yingluck – and it is hardly a coincidence.
— South China Morning Post

Pirated goods said to be worth B16m seized in Bangkok
One man was arrested and more than 20,000 counterfeit brand-name products worth about 16 million baht retail seized during a police raid on a house in Bangkok.
— Bangkok Post

Thailand Board of Investment Helps Promote Medical Robotics
Under its Thailand 4.0 vision, Thailand plans to leverage on its reputation and excellence in medical services and medical devices and strengthen its position as the regional medical hub.
— Cision PR Newswire (press release)

Thailand aims to mint homegrown unicorn in three to five years
Thailand is the second-largest economy in Southeast Asia, and its startup scene has grown by leaps and bounds in the past few years.
— KrAsia

Thai central bank warns of housing and debt risks
The Bank of Thailand’s monetary policy committee said it was concerned about risk stemming from the country’s housing market as well as from personal and corporate debt.
— Central Banking

Fujitsu aims to raise Thai market share
Fujitsu, an air conditioner brand from Japan, has been positioning Thailand as its export base for 30 years and is set to launch four models to serve business markets.
— The Nation (very annoying pop-ups)

Thai Raksa Chart becomes talk of town amid premier rumour
Thai Raksa Chart, a party linked to Thaksin Shinawatra, is rapidly becoming the talk of the country amid rumours it will announce a shock prime ministerial candidate for March’s election on Friday.
— Bangkok Post

Water outage in Cherng Talay
he Phuket Provincial Waterworks Authority (PWA) has announced that the mains water supply will be shut-off in Cherng Talay tomorrow (Feb 8).
— The Phuket News

Techno for all the senses
5 Senses Thailand a new multiday music festival taking place on Koh Phangan, Surat Thani is back for its second year just in time to celebrate Valentine’s Day.
— The Nation (very annoying popups)

Candidate Claims Harassment After Cops Fine Campaign Truck
BANGKOK — An MP contender for the Pheu Thai Party said Thursday she was unfairly targeted by police who took action against her campaign truck for being illegally modified.
— Khaosod English

Air pollution problems move to Khon Kaen
Pollution continues to choke the north-east province of Khon Kaen with the Air Quality Index reaching 187 yesterday, well beyond the “moderate” safety limit of 100. This morning it’s reading at 174.
— The Thaiger