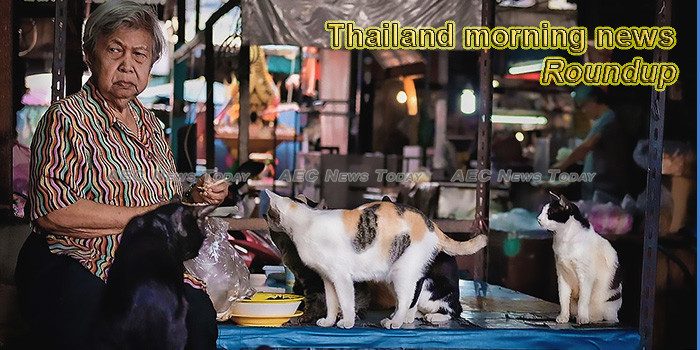 Auto output up 8% in January
Automotive output in January stood at 179,595 units, up year-on-year by 8.06%, on increased production for domestic and overseas markets, the Federation of Thai Industries said on Thursday.
— Bangkok Post

Airports concessions shake-up sought
THE THAI Retailers Association (TRA) said yesterday that it has come to an agreement with the board of the Airports of Thailand (AOT) to divide business concessions at airports into three separate contract types – for duty-free outlets; retail, food and beverage, service and banking; and duty-free …
— The Nation (very annoying popups)

Too many booze bans
In another desperate bid to curb the high alcohol consumption blamed for road traffic deaths, health authorities have come up with an idea to ban booze sales on Songkran Day on April 13 every year.
— Bangkok Post

Transport plane with Thai PM on board returns due to engine trouble
A Thai air force’s C-130 transport plane carrying Prime Minister Prayut Chan-o-cha returned to Bangkok’s air field on Thursday due to an engine trouble, according to local media.
— Xinhua

TISI index up in January
The Thai Industries Sentiment Index (TISI) increased to 93.8 points last month from 93.2 in December on big government investment projects, domestic consumption and the general election scheduled for next month.
— Bangkok Post

AoT approves ‘Terminal 2’ but scraps controversial design
Airports of Thailand Plc’s (AoT) board gave the nod Wednesday to a 42-billion-baht plan to build a second terminal at Suvarnabhumi airport, but it scrapped a blueprint for the terminal’s design.
— Bangkok Post

Red-shirt terrorism trial adjourned until after polls
The Criminal Court on Thursday postponed the hearing of defence witnesses in the trial of red-shirt demonstrators arraigned on terrorism charges, because many of the defendants are running in the March 24 general election.
— Bangkok Post

Life insurance sector to grow 3-5% this year
The Thai life insurance industry is expected to grow between 3 and 5 percent this year.
— NNT

Thailand Accelerates Push To Regain FAA Category 1 Rating
Nearly four years after the U.S. Federal Aviation Administration stripped Thailand of its Category 1 safety rating, the Southeast Asian country has accelerated efforts to address a variety of oversight and other shortcomings in a bid to restore its former standing with the FAA. Regaining Category 1 status would allow Thai-registered airlines to launch new routes to the U.S. and participate in codeshare agreements with U.S.-based carriers.
— AINonline

Thai police seek to prosecute new party leader over online speech
Just over a month before Thailand’s long-delayed elections, police say they are seeking the prosecution of the leader of a new political party for allegedly spreading “false information” about the military government in a speech posted on Facebook last year.
— Al Jazeera

Candidates face EC legal heat
The Election Commission (EC) is considering bringing criminal charges against disqualified election candidates and political parties after some of them were found to have tampered with membership records and databases, a source said.
— Bangkok Post

Facial recognition for e-KYC nears debut
The Bank of Thailand expects 10 financial and non-financial institutions testing out facial recognition for electronic Know Your Customer (e-KYC) technology in the regulatory sandbox to exit this stage, paving the way for banks to offer passbook account opening through mobile banking apps in the next quarter.
— Bangkok Post

Stray dogs to be moved from beach after hurting boy
The Krabi governor has ordered provincial livestock officials to move all stray dogs from Ao Nang beach after a gang attack a Finnish boy.
— Bangkok Post

AOT dumps Duangrit Bunnag Group’s Suvarnabhumi Terminal 2 design
The board of Airports of Thailand Public Company, the operator of Suvarnabhumi international and several other airports in Thailand, has scrapped the Suvarnabhumi Airport Terminal 2 project design, budgeted at…
— Thai PBS News

TISI index up in January
The Thai Industries Sentiment Index (TISI) increased to 93.8 points last month from 93.2 in December on big government investment projects, domestic consumption and the general election scheduled for next month.
— Bangkok Post

Thai politics goes to court. Again.
The Constitutional Court’s decision on Thai Raksa Chart is likely to be swift but unlikely to be impartial.
— New Mandala

Beware revealing graphic details of charcoal suicides, media is warned
FOLLOWING a significant number of recent charcoal-burning suicides in Thailand, the Public Health Ministry’s Mental Health Department is urging the media to avoid giving too many details of how the deaths occurred, out of fear that such reports could lead to copycat deaths.
— The Nation (very annoying popups)

Thai FDA Scrambles to Make Medical Weed a Reality
The sudden reality of legal, medical marijuana this week has only added new urgency to questions about what is legal for whom, where and when.
— Khaosod English

Thai Power Party Defends Candidate’s ‘Hot’ Pics
A relatively unknown MP candidate in Mukdahan province suddenly found herself at the center of attention on social media this week – probably not for the reason she wanted.
— Khaosod English

Naresuan Seniors, Alumni Defend Muddy Hazing
A ceremony, watched over by professors, sanctifies a wooden pole. Freshmen in white carry a heavy wooden pillar around the campus before placing it in front of the Architecture Faculty building, where they dance and sing around it. Then, the dirty part begins. Using hoses, …
— Khaosod English

Military hands over school building in Tak
The 3rd Army Area of the Royal Thai Army, along with American and Singaporean soldiers, have handed over a newly-constructed building to Ban Koh Ai Duan School in Tak province.
— Pattaya Mail