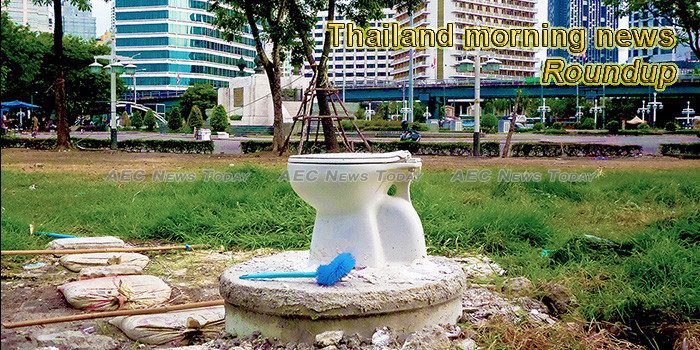 Thailand a non-mover in talent index
Thailand’s ranking in the latest global survey on developing and attracting talent remains unchanged at 42nd out of 63 countries.
— Bangkok Post

Commerce Ministry sticking with 8% export growth outlook
Despite the state planning agency painting a murky picture of exports, the Commerce Ministry remains resolute in its 8% growth forecast for this year and next.
— Bangkok Post

Prayut: No party has formally approached me
Prime Minister Prayut Chan-o-cha has, again, given little away when talking about his political future. That he will seek to remain in power after the election is not the question of the hours, though. How he will do it is what everyone wants to know.
— Thai PBS World

Thai prosecutor among trio jailed for US$1.4 million rhino horn haul
A public prosecutor and two Thais were sentenced for four years on Tuesday (Nov 20) after they were caught attempting to smuggle more than a dozen rhino horns worth US$1.4 million through Bangkok’s main airport last year.
— Channel NewsAsia

FTI strikes bullish note on 2019 despite trade worries
The Federation of Thai Industries (FTI) is optimistic that the domestic economy in 2019 will gain from the general election and public investment, even as the trade spat between the US and China pressures the country’s export outlook.
— Bangkok Post

Panel meets to discuss rail contracts
The committee overseeing the Thai-Chinese high-speed railway between Bangkok and Nakhon Ratchasima, will meet from Wednesday until Friday to discuss key issues surrounding the project.
— Bangkok Post

BoT tweaking lending to support SMEs
The Bank of Thailand is revamping a series of regulations by applying information-based lending in a bid to help financial institutions and small businesses cut costs.
— Bangkok Post

Thailand working with WEF on Digital ASEAN program
The World Economic Forum (WEF) is partnering with leading technological entities including Google, Microsoft, Cisco and Lazada to launch a Digital ASEAN program, aiming to develop digital skills among some 20 million ASEAN citizens by 2020 with an emphasis on SMEs.
— News Today (video)

‘Boom’ steps in over abuse claim
Actress Panadda ‘Boom’ Wongphudee, head of the Do Good Things Organisation (Ongkorn Tham Dee) on Tuesday urged the Crime Suppression Division (CSD) to take over a case in which a gynaecologist is accused of sexually abusing a patient during a check-up at his clinic in Nakhon Sawan.
— Bangkok Post

Suspect locks up duty warden, escapes police cell
A 23-year-old drug suspect who locked up a duty warden and escaped from the Sena district police station cell on Monday was recaptured after an extensive manhunt involving about 200 police and volunteers.
— Bangkok Post

Local sales drive auto output
The Federation of Thai Industries (FTI) has increased its projection for the country’s automotive output in 2018 after recording huge growth in domestic sales.
— Bangkok Post

Govt officials seek to lay criminal charges following boy’s Muay Thai death
THE DEPARTMENT of Children and Youth (DCY) is preparing to take action against all those involved in organising the November 10 muay thai match, in which a 13-year-old boy was killed.
— The Nation

Unesco report shows migrants, refugees still not equal to Thai children in schools
The new Global Education Monitoring (GEM) Report by Unesco shows that eight out of 10 countries with the most refugees are leading the way by including them in their national education systems.
— The Phuket News

SRT weighs 4 rail projects in East
The State Railway of Thailand (SRT) is studying four train projects in the East to cope with the major expansion of cities, while expecting bids for the first Bt8-billion project, which will run from Sriracha to Map Ta Phut, next year.
— The Nation

Prices of para rubber in decline since 2008
The Ministry of Agriculture and Cooperatives has asked the Para Rubber Committee and the Natural Para Rubber Policy Committee to consider implementing three measures to help rubber farmers cope with declining rubber prices.
— NNT

Scavengers and local projects ‘key to cutting waste in oceans’
SCAVENGERS ARE the real heroes as Asia struggles to tackle intensifying urban waste problems and marine plastic pollution, the United Nations Economic and Social Committee for Asia and Pacific (Escap) has discovered.
— The Nation (annoying popups)

Tourism Ministry seeking to boost street food quality
Famous around the world for its fresh and sometimes fiery flavours, Thailand’s street food is nevertheless in need of an upgrade, according to the Tourism Minister.
— The Nation

Auto target gets a lift
The Thai Federation of Industries (FTI) has revised upwards the 2018 automobile production target to 2.1 million vehicles.
— The Nation

The Phoenix is now high and dry at Rassada shipyards
The Phoenix was hoisted up on land this morning. It is now sitting on the hardstand at Rattanachai Shipyard in Rasssada as importance evidence for forthcoming court cases.
— The Thaiger

Private Bangkok bus operators demand fare increase
Over 200 private bus operators in Bangkok gathered outside the Ministry of Transport on Tuesday to demand an increase in fares.
— NNT

ALERT: Amoxicillin use in Thai orange orchards
The Thai Public Health Ministry is checking on pharmacies and antibiotics manufacturers that may have distributed amoxicillin (an antibiotic) for farms – reportedly used widely in northern and central orange orchards – as it could lead to drug resistance or even fatal allergies in humans as well as contaminating the environment.
— The Thaiger

PWO asserts payments to rice stock operators will be made
The Public Warehouse Organization (PWO) has met with rice store operators and quality inspectors to tell to them that pending payments will gradually be made, as 3.4 billion baht has been set aside for the rice stockpiling program in 2019.
— NNT

Medical Council to probe ethical conduct of Rama II Hospital over poor treatment of patient
The Medical Council is to set up a panel to consider action against the management of Rama II Hospital for alleged violation of ethical conduct for its mishandling of a victim attacked with acid who eventually died while being taken to another hospital, said Dr Itthiporn Kanacharoen, the council’s secretary-general on Tuesday.
— Thai PBS World

Seafood street restaurant holders go on the offensive
A street restaurant owner has given authorities in Hua Hin a spray complaining they are being singled out for overpriced seafood in their stores.
— The Thaiger