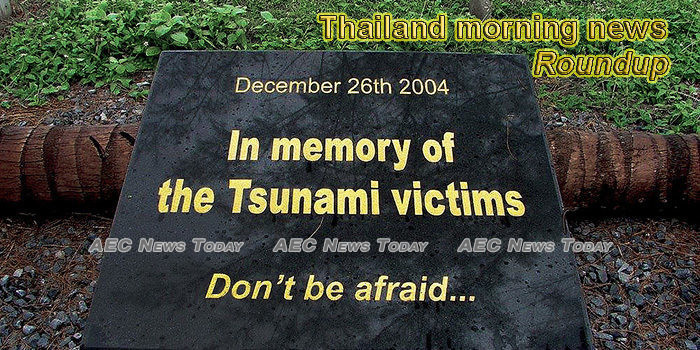 Severity of drought next year likely to equal that of 2015-16 in Thailand
Thailand is at risk of a drought like that in 2015 and 2016, while the volume of rainfall, from this month through May, is forecast to be 5-10% lower than normal, said Mr. Seri Suparathit, director of the Centre of Climate Change and Disaster at Rangsit University, today (Friday).
— Thai PBS News

6 TIMES IN 2019 THAIS AND EXPATS STOOD UP FOR THE ENVIRONMENT
Thais have a reputation of having little care for the environment – an image of a double-bagged banana from 7-Eleven comes to mind, and Thailand is literally the sixth worst plastic polluter of the oceans.
— Khaosod English

Thailand to Start Using Electronic Passports and Iris Scan System
Foreign Ministry spokesperson has revealed that Thailand will start using the latest electronic passports in the middle of the year 2020. The cover of the new passport has also been designed to reflect Thai art and culture.
— Chiang Rai Times

Over 30,000 displaced in Narathiwat floods, southern Thailand
Out of almost nowhere, and amidst a looming drought for many parts of the country, heavy rains have left flooded areas in Narathiwat, in Thailand’s deep south, displacing over 30,000 people.
— The Thaiger

Jailbroken phones slapped with ban
Around 10,000 mobile phones that have been jailbroken or have outdated operating systems will be banned from making mobile banking transactions, starting from May 1, 2020, as part of the central bank’s efforts to upgrade security for mobile banking.
— Bangkok Post

Whale spotted near Similan Islands – VIDEO
A scuba diving instructor has posted a video of a whale spotted near the Similan islands off the coast of Phang Nga. The whale is thought to be a blue whale species.
— The Thaiger

Government to consider 11 fishermen requests
The National Fisheries Policy Committee has agreed to consider 11 requests from a group of Thai commercial fishermen to help ease their hardship, given that they must continue to conform to the Illegal, Unreported and Unregulated (IUU) fishing regulations.
— Newsline (video)

Thanathorn cops rally charges
Police have issued summonses for Future Forward Party members to acknowledge charges relating to the flash mob on the Skywalk at Pathumwan intersection in Bangkok on Dec 14.
— Bangkok Post

Q3 sees dip in bank transaction crashes
The frequency of banking transaction crashes fell sharply in the third quarter after the central bank imposed a measure to publicly disclose them, according to Bank of Thailand data.
— Bangkok Post

People split over Thanathorn’s ‘flash mob’: Poll
People are split over a “flash mob” organised by Future Forward Party leader Thanathorn Juangroongruangkit at the Pathumwan skywalk in Bangkok on Dec 14 to show opposition to the government, with the number of supporters slightly higher than opponents, according to an opinion survey by the National Institute for Development Administration, or Nida Poll.
— Bangkok Post

Thailand’s Maya Bay to remain closed for another two years
The Department of National Parks Wildlife and Plant Conservation has announced that Maya Bay is going to be closed for another two years to provide a better opportunity for the ecological system to recover, whilst also completing and implementing plans for management of tourists at the famous tourist attraction.
— The Thaiger

Golden Triangle in northern Thailand opening up to tourists after decades at the centre of opium trade
The Akha hill-tribe lady had me at first glance with her blushes, laughter, and betel-nut-stained grin.
— South China Morning Post

Canals Being Used as Garbage Dumps Throughout Bangkok
The Bangkok Metropolitan Administration claims that over the past five year they have collected nearly 400,000 tons of garbage in canals.
— Chiang Rai Times

Talks on tap for lowering premiums
The Internal Trade Department is scheduled to talk with the Office of the Insurance Commission (OIC) by the middle of next month about possibly lowering health insurance premiums in keeping with the cheaper medicine price structure.
— Bangkok Post

Flood situation in southern Thailand improving
Staying with the matter, officials in the Southern provinces of Yala and Narathiwat have indicated that the flood situation is gradually improving.
— Newsline (video)

$33 Million of Gold and Assets Seized from Alleged Drug Syndicate
Police in northern Thailand have seized assets worth about $33 million from a gold shop and other business.
— Chiang Rai Times

Study finds few Thais have savings accounts
A study by Puey Ungphakorn Institute for Economic Research has identified just over 30 million Thais with savings accounts, altogether responsible for over 10 trillion baht in deposits, noting that a disproportionate 93% of depositors are considered affluent, with only 7% considered small time account holders and concluding that Thai citizens are still low on savings.
— Newsline (video)

Stronger pound, ruble hold promise for Pattaya tourism
Pattaya’s tourism industry has been keeping a close eye on exchange rates, hoping a recent resurgence in both the British pound and Russian ruble will boost tourism for the rest of high season.
— Pattaya Mail

Winners emerge in first Chim, Shop, Chai raffle
A total 135 people who used the g-Wallet 2 balance of the Pao Tang mobile application between September 27 and December 15 this year, have won prizes in the Chim, Shop, Chai (Taste, Shop, Spend) raffle, with another 35 shops also chosen as winners.
— Newsline (video)

Nida Poll indicates most people agree with Skywalk rally
Most respondents to a recent Nida Poll, by the National Institute of Development Administration, agree with the political rally, held at the Pathumwan skywalk on December 14th, by the Future Forward party.
— Thai PBS News

The green graftbuster
Rosana Tositrakul, a former senator, has always been known as an outspoken activist and corruption-buster ready to take on well-known politicians and big corporations, but now she is throwing her hat into a very different ring.
— Bangkok Post

Teen faces assault charge
A high school senior who stabbed a fellow student in the neck with a piece of broken glass will be summoned to acknowledge the charge against him, according to the Royal Thai Police.
— Bangkok Post

Thai Government program begins to identify and reward street vendors in Pattaya with certificates of excellence in the form of a clearly visible like symbol.
A new program has been officially launched in Pattaya and Chonburi today and is part of a wider country wide program to begin to clearly identify food carts that are certified as clean, professional and meet all health and hygeine standards.
— The Pattaya News

Government core party questions Future Forward’s respect for human dignity
The core government party, Palang Pracharat, has questioned the Future Forward party’s respect for human dignity for its indifference to and inaction over Tuesday’s incident when four monitor lizard toys, tagged with the names of four rebel MPs, were displayed at the party’s Thai Summit Building head office, ahead of a meeting to discuss the expulsion of the rebels.
— Thai PBS News

British Diver dies exploring Song Hong Cave in Thailand, known for its depth
A British diver was found dead on Saturday afternoon in Talay Songhong park, a popular diving site in Thung Yai district in the far South of Thailand.
— The Pattaya News

“They’re distorting our democracy” – Isaan politicians’ daughter between hope and despair for Thai democracy
Born into a family of politicians in Ubon Ratchathani, Sudarat Phithakphonphanlop learned from a young age what it means to be a representative of the people.
— Isaan Record

‘Roots’ Farm-to-Cup Cafes Let You Write Postcards to Farmers
At Roots Coffee, they don’t just serve Thai single-origin drip coffee. They have postcards for you to write to the farmers as well.
— Khaosod English

OPINION: IS THAILAND’S FUTURE GOING BACKWARD?
Are we going forward or backward? This question came to my mind after I witnessed Future Forward Party leaders mustering an anti-government “flash mob” large enough to unsettle naysayers who were confident that massive protests have been relegated to the past for good.
— Khaosod English

DO GOOD FOR NEW YEAR: CHILDREN CHARITY CALLING FOR DONATED GOODS
With Christmas and New Year just around the corner, it may be a good time to give and not just to people close to us, but to those in need as well.
— Khaosod English