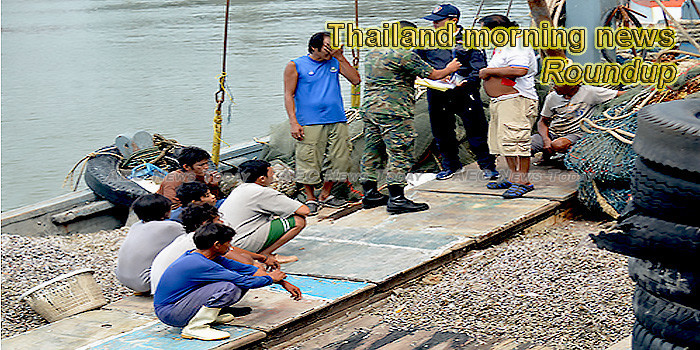 Si Sa Ket province declares dengue emergency
The northeastern province of Si Sa Ket, on the Cambodian border, has declared that the prevention and control of dengue fever required urgent attention throughout its area.
— The Thaiger

Thailand’s currency keeps getting stronger and that’s sparking concerns
The Thai baht has soared against the U.S. dollar this year, significantly more than many other emerging market currencies.
— CNBC

China welcomes progress in South China Sea issue amid tensions
Chinese Foreign Minister Wang Yi on Wednesday welcomed major progress at a meeting with his Asean counterparts in mapping out a code of conduct to avert clashes in the South China Sea.
— Bangkok Post

Central bank broods over baht as June exports fall
Thailand’s central bank is still worried about speculation in the baht and has tools to handle it, a senior official said on Wednesday, as June exports fell and the current account turned to surplus.
— Bangkok Post

US certifies Thailand’s return to democracy
The United States has certified that Thailand is again a democracy, according to the U.S. Federal Register.
— Coconuts Bangkok

Thailand’s tourism numbers to see modest recovery, supported by Chinese and Indian tourists
Thailand’s tourism sector may see a modest boost in the coming months as Chinese tourists start returning to the country.
— The Business Times

New Military Vehicle Deal Approval Puts US-Thailand Alliance in Focus
Last week, a formal announcement was disclosed about a potential new military vehicle deal between the United States and Thailand. The development put the spotlight on the ongoing efforts by both countries to continue to further their defense collaboration within the broader relationship.
— The Diplomat

Thai authorities stress prohibition on marijuana planting by foreigners
Thai Ministry of Public Health and the Ministry of Agriculture and Cooperatives on Wednesday reiterated the stance on prohibiting foreigners in growing marijuana in Thailand.
— Xinhuanet

Energy policy committee extends 5-baht discount on B20
The Energy Policy Administration Committee (Epac) announced on Wednesday the extension of the five-baht discount on retail biodiesel B20 for an additional two months, from Aug 1.
— Bangkok Post

Finance association says LTV curbs doing the job
The new loan-to-value (LTV) limits applied since April 1 should be continued as a new standard for mortgages because they have not affected real housing demand and can help reduce non-performing loans (NPLs), says the Housing Finance Association.
— Bangkok Post property

Army Chief Recommends Netflix’s ‘The Great Hack’
The army chief has recommended people watch a Netflix documentary about how social media can be weaponized to turn the tide of public opinion – it’s happening in Thailand, he says.
— Khaosod English

Chachoengsao woman sets herself on fire after divorce
A 32 year old woman set herself on fire in Chachoengsao, east of Bangkok, yesterday (Tuesday). Doctors say she only has a 10% chance of survival and 60% of her skin has been badly burned.
— The Thaiger

Thailand to Purchase 60 Strykers from US
The US has approved the sale of 60 M-1126 Stryker infantry carrier vehicles to Thailand, which will be delivered starting September for a total of USD$175 million, or 5.38 billion baht.
— Khaosod English

Two years of construction hell – residents on Rama II Road, Bangkok
Local residents living along the road upgrades to Rama II Road (Highway 35) are having to cope with worsening traffic congestion and air pollution.
— The Thaiger