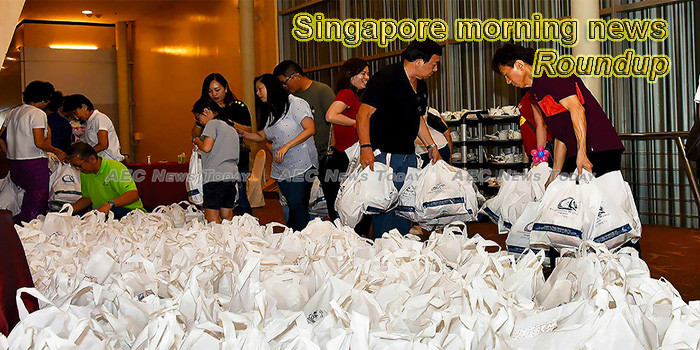 Launch of CareShield Life in 2020: How the long-term disability insurance will impact you
CareShield Life will be a compulsory long-term care insurance for Singapore residents born from 1980 onwards, regardless of their health, disability or financial status.
— Straits Times (annoying popups)

Some magnetic toys unsafe for kids, warns Enterprise Singapore after serious incidents overseas
Parents who have bought magnetic toys for their children beware: the magnets could cause serious harm if ingested by children.
— Straits Times (annoying popups)

Jail for former NSF who snapped pictures of woman in toilet at workplace
A full-time national serviceman (NSF) with the Singapore Armed Forces followed a woman into a toilet at his workplace and used his mobile phone to snap pictures of her in a cubicle.
— Straits Times (annoying popups)

RCEP negotiations are in ‘final stages’ and should be completed by this year or early next year: Chan Chun Sing
Negotiations for the Regional Comprehensive Economic Partnership (RCEP) are in their final stages, though there will be some tough trade offs required, Trade and Industry Minister Chan Chun Sing said on Monday (Sept 2).
— Straits Times (annoying popups)

Turning to tech to keep Singapore waters safe
As the maritime sector continues to digitalise, Singapore’s port authority is increasingly turning to technology to ensure the security of the Republic’s waters.
— The Straits Times

Consumers could be winners as Singapore shakes up its digital banking sector
Singapore is about to shake up its banking sector for the first time in two decades — a move that would allow technology players and non-banking companies to challenge traditional lenders.
— CNBC

Floating data center heads for Singapore
Comms conglomerate Keppel is in talks to float a data center off the coast of the land-scarce island of Singapore.
— DCD

Cloudy over Singapore
Rain clouds hovered over central Singapore yesterday afternoon as showers poured down over large swathes of the island.
— The Straits Times

‘Could not be timelier’: Religious groups support mooted changes to Singapore’s religious harmony law
Religious organisations are supportive of the proposed changes to Singapore’s religious harmony law, with some saying they were glad their feedback was accepted in the amendments proposed.
— Channel NewsAsia (very annoying popups)

About 62,000 participants to take part in month-long fire drill campaign
Two workers, who got into a scuffle and damaged some flammable items, accidentally started a fire in the scrubber yard.
— Straits Times (annoying popups)

OneMap enhanced with data from Foursquare, to get 3D upgrade
Users of OneMap can now get more information about a location, including eateries, supermarkets and other amenities in an area.
— Channel NewsAsia (very annoying popups)

Why can’t the 4G politicians say sorry or thank you?
Singaporeans have come to accept the many Hard Truths that the People’s Action Party (PAP) is no longer the same political party like the one from the First Cabinet.
— The Online Citizen

Three-year-old son’s reaction to getting hit by his classmate changed my perspective on parenting
Recently, I found out that my three-year-old son had been hit by a classmate at school. According to his teacher, Andre was struck for no apparent reason, and the classmate who did it had also bitten him some time back.
— The Pride

PUB stepping up measures to tackle emergence of rare dominant midge species at Pandan Reservoir: Masagos
The current dominant midge species that has recently emerged at Pandan Reservoir is a rare one that has not been studied in great detail, said Minister for Environment and Water Resources Masagos Zulkifli in Parliament on Monday (Sep 2).
— Channel NewsAsia (very annoying popups)

Oei Hong Leong, Raffles Education’s Chew Hua Seng in courtroom face-off
They are facing off in the High Court over an alleged promise by Mr Chew to procure a buyer for Mr Oei’s shares in the mainboard-listed education provider.
— Straits Times (annoying popups)

IG-worthy places to explore in S’pore if you can’t afford to travel overseas
Are you tired of Instagramming eggs Benedict and Marina Bay?
— Mothership

S’pore guy, approx. 8/10, makes PowerPoint slides for Tinder, includes review from cat
To counter that, one user by the name of Azzrul decided to create a presentation deck for potential matches.
— Mothership

Teenager who entered YewTee Point to steal drink, cash gets probation
A teenager who snuck into a shopping mall to steal cash, food and drinks was sentenced to probation on Monday (Sep 2) for multiple counts of trespass and theft.
— Channel NewsAsia (very annoying popups)