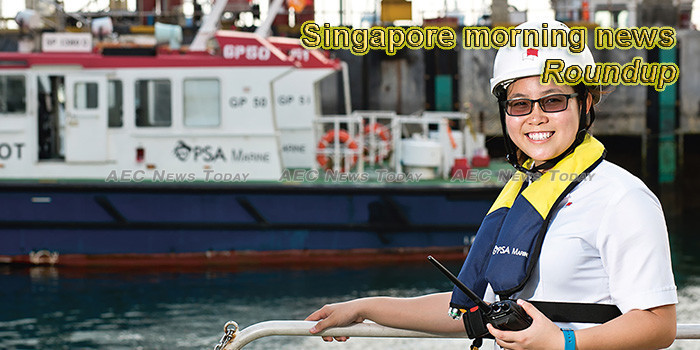 Coffee product sold online contains banned weight-loss drug: HSA
A coffee product sold online and marketed as being able to help consumers achieve weight loss in just one week has been found to contain a prescriptive drug banned in Singapore since 2010 because of an increased risk of heart attacks and strokes.
— Channel NewsAsia (very annoying popups)

Number of dengue cases rises past 12,000 even with closure of 229 clusters in past month
Almost 230 dengue clusters were closed in the last month alone, although the total number of cases of dengue has risen from a month ago.
— Straits Times (annoying popups)

Singapore manufacturing output down 8% in August
Singapore’s manufacturing output fell 8 per cent year-on-year in August on the back of sharp falls in electronics and precision engineering output, as the sector continued to reel from trade tensions between China and the United States.
— Channel NewsAsia (very annoying popups)

Economists expect MAS to ease Sing$ appreciation in October
As Singapore continues to see sluggish trade and growth data, with core inflation at a three-year low, economists are looking to the central bank to ease monetary policy in its upcoming review and provide some support to the economy.
— The Straits Times

No more need for spies and moles: Be vigilant about foreign interference in age of social media, warns S. Jayakumar
Singaporeans need to be vigilant about foreign interference as it could endanger national sovereignty, said former minister S. Jayakumar on Wednesday (Sept 25) at a session of The Straits Times Book Club at the National Library.
— Straits Times (annoying popups)

Singapore factory output tumbles 8% in August, reigniting fears of technical recession
It was bogged down by electronics production, which saw its biggest monthly slump since 2012.
— Straits Times (annoying popups)

Chin Swee Road death: MSF reviewing how social support network can be strengthened
The Ministry of Social and Family Development (MSF) is reviewing how its network of agencies and community organisations can be strengthened, it said on Thursday (Sep 26), after the death of a two-year-old girl in a Chin Swee Road flat escaped notice for five years.
— Channel NewsAsia (very annoying popups)

Lawrence Wong cites concerns over social media contributing to suicide in the young
Close to 800,000 people around the world die due to suicide every year, and the numbers are rising, the World Health Organisation (WHO) said.
— Straits Times (annoying popups)

More haze relief as air quality expected to enter good range for first time since hitting unhealthy levels
NEA said that the likelihood of haze affecting Singapore is low, noting that thundery showers are forecast over Singapore and in parts of Sumatra for the next few days.
— Straits Times (annoying popups)

Jail for mother and son after he faked her death to claim $3.7m from insurance
An automotive consultant, who was facing financial woes, hatched an elaborate plan to buy insurance policies for his mother and then fake her death to obtain payouts and Central Provident Fund (CPF) withdrawals, totalling several million dollars.
— Straits Times (annoying popups)

Grab says Uber acquisition not in breach of competition laws as Malaysia watchdog steps up probe
Singapore-based Grab Holdings on Thursday (Sept 26) said that it has fully cooperated with the Malaysia Competition Commission (MyCC) in their request for information, and is not aware of any breach of competition laws since its acquisition of Uber last March.
— Straits Times (annoying popups)

MAS likely to slow pace of Singdollar appreciation: analysts
MARKET watchers are expecting the Monetary Authority of Singapore (MAS) to ease its monetary policy stance for its review in mid-October, with the central bank likely to slow down the pace of the Singapore dollar gain against a basket of currencies.
— The Business Times

Singapore can lead the change in rewriting the hydrocarbon narrative
FEW would dispute Singapore’s leading role in the Asian and global oil and gas (O&G) industry. Of course, that is a good thing – but it also means that the country’s O&G sector, like the industry itself globally, must contend with shifting fundamentals and an increasingly hostile narrative.
— The Business Times

LGBT activist files new court challenge against gay-sex law
An activist for lesbian, gay, bisexual and transgender (LGBT) rights, who is a retired general practitioner, has filed a new court challenge against Section 377A of the Penal Code, a law that criminalises sex between men, arguing that it is unconstitutional.
— Straits Times (annoying popups)

Tech can be used by govts to exert control, say experts
Technology has brought greater convenience, but governments can also use it to exert political control over many aspects of people’s lives, experts said yesterday at a conference on foreign interference tactics and countermeasures.
— Straits Times (annoying popups)

Family in Chin Swee Road murder case is known to community agencies: MSF
The Ministry of Social and Family Development said there were various interactions between the family and various agencies and community organisations over the years, without elaborating.
— Straits Times (annoying popups)

Industrial building with hidden storey: Illegal floor demolished, unit up for sale
The company which built an illegal storey inside its penthouse unit at The Alexcier in Alexandra Road has demolished the floor and put the unit up for sale.
— The Straits Times

SBS Transit staff member rescues boy hanging from MRT escalator in nick of time
In a flash, Mr Mohamed Ferdaus Mohamed Yusoff bolted up a moving escalator in an MRT station to grab hold of a little boy hanging off its side.
— The Straits Times

2 primary schools, Singtel get President’s Award for Environment for their green efforts
Old habits die hard when it comes to adopting environmentally friendly practices, so some schools are making sure they plant the seeds of green living in the younger generation.
— Straits Times (annoying popups)

SBS Transit staff member rescues boy hanging from MRT escalator in nick of time
In a flash, Mr Mohamed Ferdaus Mohamed Yusoff bolted up a moving escalator in an MRT station to grab hold of a little boy hanging off its side.
— Straits Times (annoying popups)

Advocacy group Sias outlines plans to better serve investors
Investors need sound information and guidance to navigate their way in a constantly changing world, and it is a task that the Securities Investors Association Singapore (Sias) hopes to fulfil.
— Straits Times (annoying popups)

Go the distance at annual walk to earn rice for the needy
An annual walk to benefit underprivileged families kicked off yesterday, aiming to chalk up 65,000km through community and corporate partner participants.
— Straits Times (annoying popups)

The need to move faster on burning issue of PMD safety
Flats razed by fires caused by personal mobility devices (PMDs) have brought the issue of the safety of e-scooters uncomfortably close to home.
— Straits Times (annoying popups)

Former male nurse sentenced to jail, caning for molesting patient in hospital
A male nurse was sentenced on Thursday (Sept 26) to 10 months’ jail and three strokes of the cane for molesting a hospital patient under his care.
— Straits Times (annoying popups)

NUS undergrad molester avoids jail because he has good grades & ‘potential to excel in life’
A student from the National University of Singapore (NUS) who repeatedly molested a woman at Serangoon MRT station in September 2018 was on Wednesday (Sep. 25) sentenced to probation.
— Mothership

Man who committed armed robbery at Shell petrol station gets 11½ years’ jail
A convicted robber, who absconded from court during a break in his hearing, was sentenced on Thursday (Sept 26) to 11 1/2 years’ jail.
— Straits Times (annoying popups)

‘Once they are gone, it will really be a pity’: Orchard Rd ice-cream carts could end with their owners
Attending to his customers, Mr Chieng Puay Chui and his ice-cream cart have been a familiar sight along Orchard Road for about three decades.
— Channel NewsAsia (very annoying popups)

Some travel agencies not sailing into the sunset
At online travel agency Klook’s travel festival next weekend, there will be nary a package deal, travel agent or holiday brochure in sight.
— Straits Times (annoying popups)