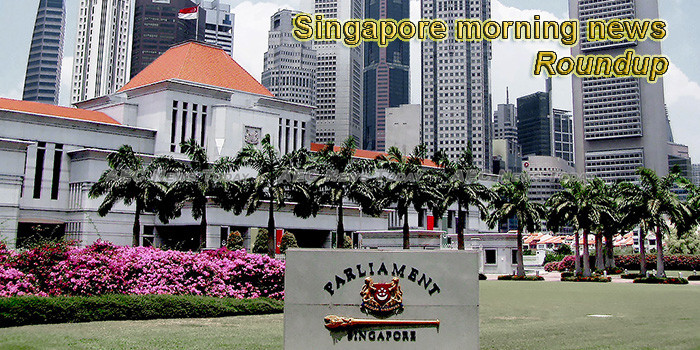 As status quo fails, experts moot long arm of law to punish haze culprits
With the status quo failing to curb the almost annual occurrence of transboundary haze, several experts have proposed for Malaysia to legislate against the disaster in order to protect the country’s interests.
— Yahoo News

HDB to try out automated alert system for worksite safety
To improve worker safety and reduce the need for manual labour, the Housing Board (HDB) will try out a surveillance system that automatically detects high-risk situations at construction sites and sends alerts to the person in charge.
— Straits Times (annoying popups)

Transit app Zipster to launch monthly subscription plans for public transport, ride-hailing in 2020
SINGAPORE: Within the next six months, commuters here will have access to virtually unlimited rides on buses and trains, as well as discounted rides on ride-hailing services and shared-bikes with a flat monthly fee.
— Channel News Asia (very annoying popups)

Brexit may have limited impact on Singapore: Analysts
Singapore could emerge relatively unhurt from Brexit, said analysts, even as Britain’s departure from the European Union remains mired in uncertainty after a chaotic parliamentary session last week.
— Straits Times (annoying popups)

New app to offer savings when commuters subscribe to plans covering both private and public transport
Savings of up to 20 per cent a month are in the offing for commuters when an app, with major transport players behind it, introduces subscription plans in six months’ time.
— Straits Times (annoying popups)

Haze situation will be monitored during F1 race weekend: STB
The Formula 1 Singapore Grand Prix remains on track for the Sep 20 weekend despite the haze, though the authorities will be monitoring the situation, said the Singapore Tourism Board (STB) on Monday (Sep 16).
— Channel NewsAsia (very annoying popups)

Singapore companies looking to capitalise on region’s fast-growing gaming culture and interest in e-sports
It would not be just gaming developers and publishers who will benefit when gamescom asia makes its Singapore debut in October 2020, said industry experts. Professional gaming, or e-sports, could also take off, they added.
— Channel NewsAsia (very annoying popups)

Higher premiums work, but they’re no magic pill
POLICYHOLDERS of Integrated Shield plans (IP), particularly those catering for private hospitals, have suffered relatively steep premium hikes over the past few years – both for their base plan and riders – especially at older ages.
— The Business Times

Yale to conduct fact-finding into cancelled Yale-NUS course
Yale University has expressed concern over the cancellation of a programme by Yale-NUS College that was meant to introduce students to various modes of dissent and organising resistance, saying such an action might threaten the values of academic freedom and open inquiry.
— Straits Times (annoying popups)

Most medical, dental students are from higher-income families
Two-thirds of the undergraduates reading medicine and dentistry at Singapore’s local universities come from households earning more than $9,000 a month, while the rest of their peers are from families earning below that level.
— Straits Times (annoying popups)

Video of woman abusing puppy was filmed in 2014, culprits already sentenced to life in jail
The women in the videos were not charged in exchange for testifying against the masterminds.
— Mothership

Teen, 17, robbed & raped 53-year-old ‘mamasan’ in Yishun HDB flat
A 17-year-old teen who conceived a revenge plot to rob and rape a 53-year-old “mamasan” after being blown off while soliciting prostitutes online, was convicted in court on Sep. 16, 2019.
— Mothership

Jail for Singaporean who gave bribe to unlawfully obtain Malaysian driving licence
A man’s elaborate plan to own and drive two cars here hit a bump in the road when he incurred multiple parking penalties.
— Straits Times (annoying popups)

District 10 bungalow in Garlick Avenue GCB area for sale at $16.5m
A single storey detached bungalow located at 72 Garlick Avenue in a good class bungalow (GCB) area has been put up for sale via expression of interest for $16.5 million.
— Straits Times (annoying popups)

Singapore shares open lower on Monday as oil spikes; STI down 0.3% to 3,201.88
Singapore shares started the week lower as oil prices surged the most on record after drone attacks over the weekend on a Saudi Arabian oil facility removed about 5 per cent of global supplies.
— Straits Times (annoying popups)

Tech talent shortage shows up in job mismatches
The job market these days is a bit like a Goldilocks breakfast – piping hot for those in the tech field but icy cold for people seeking work in areas like customer service, said a job portal.
— Straits Times (annoying popups)

Patricia Mok wows internet with elaborate wanton mee costume at friend’s themed birthday party
Patricia Mok might be well known for her loud and larger-than-life comedy as well as the “ah lian” persona, but she clearly cleans up well too.
— Mothership

3 Singapore Dividend Shares I Wouldn’t Touch in 2020 and Beyond
These three Singapore stocks have got tasty dividend yields but their business prospects are not that promising.
— The Motley Fool

Independent auditor flags going concern doubts in USP Group’s financials
Independent auditors RSM Chio Lim LLP has drawn an emphasis of matter on a material uncertainty in USP Group’s FY2019 financial results which may cast doubt on its ability to continue as a going concern, the company said in a bourse filing on Saturday (Sept 14).
— Straits Times (annoying popups)

Taking product packaging from cradle to grave
CUTLERY and packaging labelled as biodegradable have wormed their way into the local food industry in years, as more consumers and businesses become environmentally conscious.
— The Business Times

‘Ferrari woman’ grants option to buy her GCB for S$47m
SHI Ka Yee, in her 70s and dubbed the Ferrari woman for a series of offences while driving her Ferrari, is understood to be in the early stages of selling her bungalow in Astrid Hill for S$47 million.
— The Business Times

The rise of the flexible workspace
Disruptive technology, booms in start-up and franchising culture, agile working practices and the ever-present desire to keep costs down point to the appeal of flexible workspaces.
— Straits Times (annoying popups)