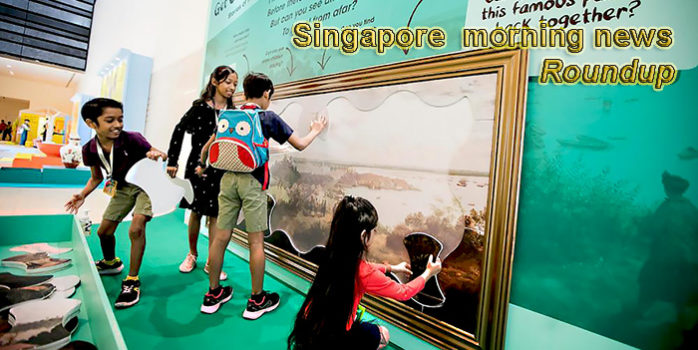 Fake news law is good but it shouldn’t be used to stifle dissent: Singapore’s startup community speaks out
“The jail cells in Singapore are not bad, food is quite good, too,” quipped an entrepreneur when we sought his comment on the new ‘fake news law’, enacted by one of the world’s wealthiest countries.
— e27

Biotech breakthrough means local farms could provide a third of Singapore’s produce
Singapore could be an urban farming oasis and achieve government-set guidelines for produce self-sufficiency as researchers there pioneer the development of once-problematic organisms that can speed up the growth of plants, fruit and vegetables.
— FoodNavigator- Asia

65% of all startup funding in SEA goes to Singapore: 2019 Google report
South-east Asia’s (SEA) internet economy is now worth US$100 billion, and will triple to US$300 billion by 2025, an annual report on the region’s digital economy has found.
— Business Insider

Companies should upgrade workers’ skills to be ready for Industry 4.0: NTUC
With technology set to disrupt industries, companies should increase their investment in training to ensure their workers are ready for a more automated future.
— Straits Times (annoying popups)

Singapore factory outlook falls to 3-year low in September as new orders shrink
SINGAPORE manufacturing sentiment fell to its weakest in more than three years in September, in an early measure of third-quarter trade and factory production numbers.
— The Business Times

More women needed in cyber security to meet high industry demand: Sim Ann
The Republic needs more women to take up positions in cyber security, in a sector that is facing a shortfall of talent.
— Straits Times (annoying popups)

Indonesia accuses two Singaporeans over imported plastic waste
Indonesia is accusing two Singaporeans of importing 87 containers of plastic scrap without the correct permits, an official said on Thursday (Oct 3), marking a step up in the country’s efforts to crack down on shipments of foreign waste.
— Channel NewsAsia (very annoying popups)

930,000 HDB households to get GST Voucher rebate this month
About 930,000 Singaporean households will receive a GST Voucher to offset part of their utility bills this month.
— Straits Times (annoying popups)

Man lied about sex history before donating HIV-contaminated blood
A man who did not know he was HIV-positive donated contaminated blood and lied in the accompanying form about his sexual history.
— Channel NewsAsia (very annoying popups)

‘Tough’ 2019 PSLE maths paper: 5 challenging questions over the years
A Primary School Leaving Examination (PSLE) mathematics paper last Friday (Sept 27) was said to be so difficult that some pupils who took it were left in tears.
— Straits Times (annoying popups)

E-commerce and logistics sector top warehouse occupancy in Singapore: Colliers
The logistics and e-commerce sector accounted for 44 per cent – the biggest chunk – of occupied warehouse space in Singapore, according to a Colliers International report on Thursday.
— Straits Times (annoying popups)

Maybank not ruling out zero Singdollar appreciation in event of technical recession
Maybank analysts said the Monetary Authority of Singapore (MAS) is likely to reduce the slope of the Singapore dollar nominal effective exchange rate (S$NEER) to 0.5 per cent from the current 1 per cent appreciation path at its upcoming policy review.
— Straits Times (annoying popups)

Fewer HDB resale flats sold in September as prices continue to slide
SRX forecasts that in the next three months, 2,107 flats will enter the HDB resale market as they approach their five-year minimum occupation period.
— Straits Times (annoying popups)

Medtech offers booster shot for Singapore’s biomed
IT’S been a tough year for the manufacturing sector, but the medical technology sub-sector has had a standout performance so far and is expected to continue to do well on the back of growing demand for high-tech medical equipment in Asia and opportunities brought on by digitalisation.
— The Business Times

Bus captain asks her passengers for permission before rushing to put out fire on lorry
It took bus captain Ms Thian Siew Mui all of 20 seconds to become a superwoman.
— Straits Times (annoying popups)

Lorry driver in Yio Chu Kang accident that left 3 dead gets discharge not amounting to acquittal
A lorry driver charged last year with causing the deaths of three pedestrians near Yio Chu Kang MRT station was temporarily let off the hook on Thursday (Oct 3), pending the outcome of a coroner’s inquiry into the deaths.
— Straits Times (annoying popups)

Children told lies by parents grow up to lie more as adults: Study
Parents who lie to their children out of convenience may be doing more harm than good, leading their offspring to lie more to them once they become adults.
— Channel NewsAsia (very annoying popups)

$5m tech centre to boost energy efficiency for SMEs to be launched by end-2019
A tech centre to help small and medium-sized enterprises (SMEs) to become more energy-efficient will be launched here by the end of this year, said Permanent Secretary for the Ministry of Environment and Water Resources Albert Chua on Thursday (Oct 3).
— Straits Times (annoying popups)

Motorist saves passengers from out-of-control taxi: What to do if your driver blacks out
What should you do if the driver of the car you are in blacks out? The passengers of a taxi found themselves in this situation on Tuesday morning (Oct 1) when the cabby lost consciousness behind the wheel.
— Straits Times (annoying popups)

Youth gets jail, caning for raping ex-girlfriend and cousin
A youth who raped his former girlfriend in his flat when he was 17, and then a distant relative less than a year later, was on Thursday (Oct 3) sentenced to a jail term of six years, nine months and two weeks.
— Straits Times (annoying popups)

Man denies driving Maserati that dragged Traffic Police officer for more than 100m
The man accused of driving a Maserati that was caught on video dragging a Traffic Police (TP) officer along Bedok Reservoir Road has denied that he was the driver that day.
— Straits Times (annoying popups)

President Halimah launches children’s books to mark Istana’s 150th anniversary this year
President Halimah Yacob found herself in the hot seat on Thursday (Oct 3) as she was grilled by a crowd curious about the Istana – from the insects in the garden, the guests to the rooms.
— Straits Times (annoying popups)

SMU boosts patrols, CCTV outside toilets, showers as it revises disciplinary framework
Singapore Management University (SMU) has strengthened its ground patrols, increased the number of CCTV monitors outside toilets and showers, and installed signs warning of trespass into such facilities in a bid to boost campus security.
— Channel NewsAsia (very annoying popups)