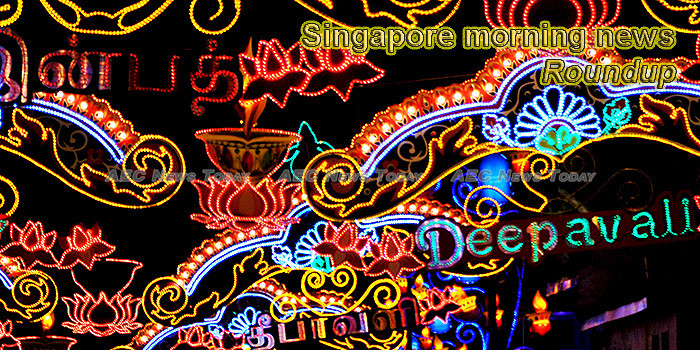 Wholesale electricity price a cheaper option for consumers? But experts say it depends on usage, market conditions
Consumers looking for more bang for their buck have been exploring different retailers of electricity in the Open Electricity Market, but they can also consider buying electricity directly from the wholesale market through energy utilities provider SP Group.
— The Straits Times

Singapore will continue to rely on natural gas amidst push to boost solar capacity: Chan Chun Sing
More than 95 per cent of Singapore’s energy now comes from natural gas, which it imports in liquefied forms from all over the world.
— Straits Times (annoying popups)

Online firms on a roll to feed big appetite for on-demand food
Singaporeans have developed a ravenous appetite for online food delivery, with riders now a common sight at restaurants and hawker centres around town and it is only going to get bigger from here.
— The Straits Times

Money-saving RSAF project for F-15SG fighters lauded at Innovation Symposium
An idea by a Republic of Singapore Air Force (RSAF) engineer to replace just the lights on the F-15SG fighter jet instead of the whole component has not only saved money and downtime for the plane, the Singapore project has found its way into the technical manual for F-15 operators all over the world.
— Straits Times (annoying popups)

More scope for government involvement to prevent societal splits from immigration and class: IPS survey
While action is being taken to prevent divisive issues like race and religion from developing into significant faultlines in society, there are other issues where greater intervention is seen as potentially beneficial, according to survey findings revealed on Tuesday (Oct 29).
— Channel NewsAsia (very annoying popups)

MOH to develop guidelines for firms that provide non-clinical genetic testing
Firms offering the tests say they can tell you whether you’re at risk of developing certain diseases.
— Channel NewsAsia (very annoying popups)

S’pore’s youths perceived to be more sensitive to racial & religious issues due to National Education, study suggests
However, younger respondents were generally resistant to more government involvement in such issues.
— Mothership

SDP’s Chee Soon Juan & CPF Board tussle over S’poreans who allegedly can’t withdraw savings
CPF said that they have not received the details from Chee and are unable to ascertain the circumstances faced by the two members.
— Mothership

UK ex-headmaster jailed in Singapore drug case
A British former headmaster of an international school in China has been jailed for 10 months in Singapore after admitting possession and consumption of methamphetamine, officials said Tuesday.
— The Online Citizen

Number of Malay drug abusers arrested in S’pore has almost halved in past 16 years: Amrin Amin
The number of Malays who repeated their offences within two years has also gone down in the past five years.
— Mothership

Stamps featuring hornbill, falcon to be released to mark 50 years of Singapore-Poland ties
Singapore Post (SingPost) and its counterpart in Poland, Poczta Polska, will jointly release a pair of stamps on Wednesday (Oct 30) to commemorate 50 years of diplomatic relations between the two countries.
— Straits Times (annoying popups)

S’pore’s first automated underground bicycle parking system to cease operations in Dec, LTA cites low take-up rate
SecureMyBike, Singapore’s first automated underground bicycle parking system, will cease to operate at the end of Dec this year due to a low take-up rate by cyclists, despite initiatives by the Land Transport Authority (LTA) to promote the system.
— The Online Citizen

JP Morgan tells staff to respect others as its FB page flooded with calls for Whampoa condo man’s sacking
The financial institution confirmed it was aware of the video and was looking into the matter.
— Mothership

Digital literacy for the masses: How Apple is investing in tech education across Singapore
Orange you glad Apple cares about education? Are you familiar with the three apples that changed the world? First, the forbidden fruit from Adam & Eve’s story, then the apple that gave Newton a concussion (and later, gravity), and lastly Steve Jobs’ half-bitten apple.
— e27

Forum to discuss race, impact and role of social media in addressing sensitive issues
Race continues to be a faultline. While recent surveys show that levels of trust and harmony between people of different races remains high, discrimination and lack of sensitivity are also concerns.
— Straits Times (annoying popups)

CPF Board: Not withdrawing $140K would have given man monthly payouts of $1K or more after 65
Clifford Theseira, 72, has earlier wrote on his Facebook page relating that he is only getting a monthly payout of $575 from CPF Board.
— The Online Citizen

Jail for man who molested maid and took pictures of her in toilet
A domestic helper chided her male employer for taking photos of her while she was in the toilet but instead of showing remorse, he molested her repeatedly a few weeks later.
— Straits Times (annoying popups)

Generation Grit: ‘He would have been proud,’ says 1st-class honours grad who stayed up nights to care for ailing dad
Maharah Abdul Mahid burnt the midnight oil studying till 5am almost every day in her first two years of university.
— Straits Times (annoying popups)

Woman arrested for allegedly throwing TV set from condo unit, suspected drug use
A 31-year-old woman was arrested after she threw a television set off her 10th-floor condominium unit on Monday (Oct 28), with the police also investigating her for suspected drug use.
— Straits Times (annoying popups)

Grieving mothers raise awareness on youth suicides with new advocacy group, PleaseStay.
On the way to the crematorium two days after her young son’s suicide, Ms Doreen Kho vowed that his death would not be in vain.
— Straits Times (annoying popups)

Generation Grit: ‘He would have been proud,’ says first class honours grad who stayed up nights to care for ailing dad
Maharah Abdul Mahid burned the midnight oil studying till 5am almost every day in her first two years of university.
— The Straits Times

SMRT employee stole cash at Pasir Ris station for his wedding, gets jail
An SMRT employee who stole money from the cash registers at Pasir Ris train station as well as a bag left at the lost-and-found section was jailed for two weeks on Tuesday (Oct 29).
— Channel NewsAsia (very annoying popups)

Member of public laments PA Grassroots’ decision to organise Halloween event instead of celebrating Deepavali
A member of the public Jason Goh Yew Choon wrote to ST Forum today, asking the grassroots organisations at Tanjong Pagar GRC and Radin Mas SMC to focus on celebrating local festivities instead of foreign ones (‘Forum: Community event could have focused on Deepavali instead’, 29 Oct).
— The Online Citizen