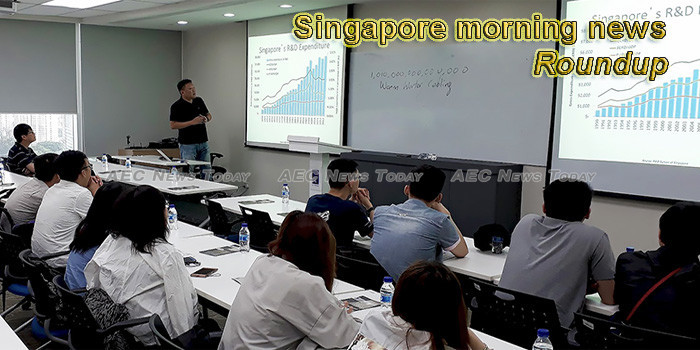 Up to four 5G networks being planned to secure Singapore’s digital future
Singapore has set its sights on up to four 5G networks, instead of the two initially planned for, as the authorities take bolder steps to spearhead developments believed to be crucial to the nation’s economic growth.
— The Straits Times

More than $13b invested in start-ups in Singapore between Jan and Sept this year
Despite the slowing economy, funds invested in companies here rose by more than one-third in the first nine months of this year.
— Straits Times (annoying popups)

Singapore to focus on structural policies, not ‘extraordinary measures’ in light of global economic weakness: DPM Heng
Deputy Prime Minister Heng Swee Keat has reiterated that Singapore is not at the stage where extraordinary measures are needed, even as the country’s economy narrowly avoided a technical recession in the third quarter of this year.
— Channel NewsAsia (very annoying popups)

Opportunities for Singapore in region despite economic challenges: Chee Hong Tat
Electrical appliance giant Dyson may have shelved some of its plans in Singapore, but it will still expand its presence in the Republic, said Senior Minister of State for Trade and Industry and Education Chee Hong Tat.
— Straits Times (annoying popups)

Woman wins National Service Advocate award for cancelling her honeymoon to fill in for co-worker on in-camp training
Supervisor Ulfah Khairiah Aman had planned to fly to Bali for her honeymoon two days after her wedding.
— Straits Times (annoying popups)

Doctor in HIV data leak Ler Teck Siang jailed for drug offences
The doctor at the centre of a data leak from Singapore’s HIV register was on Thursday (Oct 17) sentenced to 15 months in jail for drug offences.
— Channel NewsAsia (very annoying popups)

Researchers who created urban planning simulation model for Tengah wins President’s Technology Award
Future residents of new Tengah town can take comfort from the fact that their smart homes will be cooling by design as the days get hotter as a result of climate change.
— Straits Times (annoying popups)

Woman cuts taxi ride short after finding cockroaches inside
A female passenger who hailed a taxi at Golden Mile Complex on Tuesday (Oct 15) was in for an unpleasant surprise when she found several cockroaches inside the vehicle.
— Straits Times (annoying popups)

Cabby who knocked down cyclist in Braddell Road jailed, banned from driving
A taxi driver who collided into a cyclist, causing her to suffer serious injuries including a fractured skull and bleeding in her brain, was sentenced to a week’s jail on Thursday (Oct 17).
— Straits Times (annoying popups)

How to profit from Singapore grants for small businesses
In Singapore, 99 per cent of the companies are Small and Medium-sized Enterprises (SMEs).
— e27

Singaporean woman shares account of how she offers free rides to those in need
Driving is simply a way to get from one place to another but for one Zai Bakar, it’s an opportunity to help others.
— The Pride