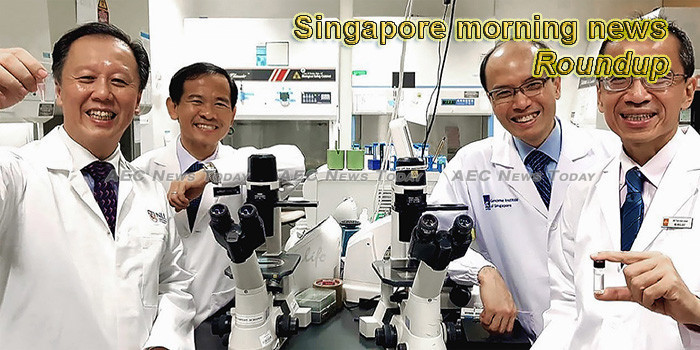 Study names Singapore in the top 5 list of cities for launching digital, tech ventures
Singapore has been named in the top five list of best cities to launch a digital or tech ventures in the world, according to a recent study by Movinga, a Europe-based full-service provider in the moving industry.
— e27

New SIA pact with Malaysia Airlines may get off the ground within a year
THE “wide-ranging” commercial pact between the national carriers of Singapore and Malaysia to share revenue on flights between the two countries and expand codeshare routes could take off the ground within a year, said Singapore Airlines (SIA) chief executive Goh Choon Phong on Wednesday.
— The Business Times

Food safety agency appealing for information on video of chicken sausages with ‘white worms’
A Valley Chef spokesman told ST that the white materials seen floating in the water are not the worms claimed in the video.
— Straits Times (annoying popups)

SilkAir hurt by grounding of 737 MAX planes even as SIA Group posts higher profit
egional carrier SilkAir had a turbulent showing in the first half of the year because of the grounding of its fleet of Boeing 737 MAX 8 planes, even as parent company Singapore Airlines (SIA) Group turned in a higher profit.
— Channel NewsAsia (very annoying popups)

Missing divers including Singaporean did not consult local guides on sea conditions: Indonesian rescue official
The three divers, including a Singaporean who went missing off Indonesia’s Java island, went scuba diving without consulting local guides who could have warned them about the strong undercurrents in the area, a senior rescue official said on Wednesday (Nov 6).
— CNA

Singapore and Hong Kong not a zero-sum game
SIGNS continue to mount that Singapore stands to be a beneficiary from Hong Kong’s protracted woes, but such a narrow view obscures the likelihood that the Republic – and even the entire region – will not go unscathed if the situation worsens.
— The Business Times

Financial firms due to disclose stranded-asset risks from climate change
SINGAPORE is expected to put out guidelines on environmental risk management for the financial sector, as climate change threatens to leave some assets stranded and catch financial institutions off-guard.
— The Business Times

Workers’ Party MP Low Thia Khiang to keep out of any AHTC discussion on recusal
Former Workers’ Party (WP) chief Low Thia Khiang told reporters last night that he would refrain from participating in any meeting or discussion by the Aljunied-Hougang Town Council (AHTC) on whether he and fellow MP Sylvia Lim should recuse themselves from all its financial matters.
— The Straits Times

Trafigura pilots US$20m trade on Singapore blockchain platform
A NEW blockchain platform meant to tackle the perennial problems behind the trillion-dollar trade finance market has been developed in Singapore among partners including commodity trading giant Trafigura and DBS, with a US$20 million pilot trade to be transacted via it.
— The Business Times

Firms dangle double-digit pay hikes for tech talent
SINGAPORE tech talents – including those in non-technology industries – continue to see high demand despite a slowing global economy and companies switching their hiring to a lower gear.
— The Business Times

SIA goes green by saving fuel, using paper straws
Plastic is out and paper straws and reusable cups are in for Singapore Airlines (SIA) as it seeks to shift to more sustainable practices, both in and outside the aircraft.
— Straits Times (annoying popups)

Angry PMD users flood Lam Pin Min’s Facebook page with angry comments
On Nov. 4, Senior Minister of State for Transport Lam Pin Min announced in Parliament that the use of e-scooters will be prohibited on all footpaths, starting Nov. 5.
— Mothership

Vegetables must be soaked before cooking: Competition raises awareness about diet for dialysis patients
Student Lim Kai Ling initially thought that cooking claypot chicken rice without chicken stock would be a recipe for disaster but giving up was not on the menu.
— Straits Times (annoying popups)

684 medals awarded to outstanding Home Team officers
Inspector Michelle Tan Lye Cheng, 39, has seen a lot, including a disturbing drug bust in 2016 at a chalet, involving a couple who consumed drugs openly in the presence of their two children.
— Straits Times (annoying popups)

HIV-positive man gets jail and fine for lying about sex history in blood donation form
A man who went to a blood donation drive in hopes of encouraging his colleagues to do the same lied about his sex history and gave HIV-infected blood.
— Channel NewsAsia (very annoying popups)

Up to S$5,000 fine for PMD users who ride on grass: NParks
Electric scooter users who try to circumvent the new footpath ban by riding on the grass alongside sidewalks could face a fine of up to S$5,000.
— Channel NewsAsia (very annoying popups)

PMD retailers worried about impact of footpath ban that came ‘without warning’
Personal mobility device (PMD) retailers are concerned that their sales will plunge following the introduction of new rules prohibiting the use of e-scooters on footpaths in Singapore.
— Channel NewsAsia (very annoying popups)

Cities can be ally in climate action: Experts
MWell-planned cities can be an ally against climate change, experts at a green building event said yesterday.
— Straits Times (annoying popups)

Smart meters to help more homes go green
Households have long been urged to go green, and soon more homes in Singapore will have the tools to teach them how to do so on the energy front.
— Straits Times (annoying popups)

Sports School met all targets last year after failing to do so in 2016, 2017
The Singapore Sports School (SSP) did not meet three of its sporting, academic and student well-being targets in 2016 and one in 2017, but met all 14 last year, said Minister for Culture, Community and Youth Grace Fu in Parliament yesterday.
— Straits Times (annoying popups)

DPM Heng Swee Keat got stuck on several occasions while debating on motion regarding AHTC
Deputy Prime Minister Heng Swee Keat put forth a motion in Parliament on Tuesday (5 November) calling for Worker’s Party (WP) MPs Sylvia Lim and Low Thia Khiang to recuse themselves from dealing with or having oversight over financial matters of the Aljunied-Huogang Town Council (AHTC) until the court case has ended.
— The Online Citizen

All COE prices lower except in motorbike category
The rise in motorcycle COE price could be a knee-jerk reaction to the recent ban of e-scooters on public footpaths.
— Straits Times (annoying popups)

Principal loves teaching pre-schoolers, takes lead in skills upgrade with pursuit of master’s
When he first started teaching at a pre-school, even the parents of the children enrolled there were curious as to why a man would take up the job.
— Straits Times (annoying popups)

Organ donor brothers among runners in 2,000km nationwide relay for charity
A pair of brothers who followed each other in becoming living organ donors were back tracing each other’s steps in an ongoing relay event that has participants cover 2,000km all over Singapore.
— Straits Times (annoying popups)

Woman dies after pushing 2-year-old toddler away before being hit by car at Lentor Ave
A 30-year-old woman pedestrian died after a car accident along Lentor Avenue on Tuesday, Nov. 5.
— Mothership

Woman goes back to wounding neighbour’s religious feelings despite court order
A woman was given a two-year mandatory treatment order (MTO) in June 2017 for such acts as placing raw pork outside the home of a Malay-Muslim neighbour.
— Straits Times (annoying popups)