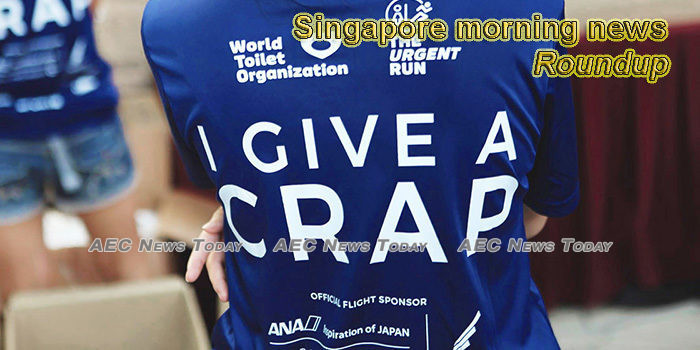 Highway Code to include guidelines on emergency vehicles, PMDs and pedestrian use of mobile phones
Amendments to the Highway Code, which include guidelines on the use of personal mobility devices (PMDs), giving way to emergency vehicles and pedestrians’ usage of mobile communication devices, will take effect from Dec 1, police announced on Friday (Nov 15).
— Channel NewsAsia (very annoying popups)

Wider range of healthier food choices, more programmes to fight diabetes since 2016: MOH
As of 2018, one in two stalls in hawker centres and coffee shops have at least one healthier option on their menu.
— Straits Times (annoying popups)

Regulators to beef up policing of corporate and governance breaches
REGULATORS and enforcement agencies are nudging towards closer collaboration in the patrolling and investigation of the Singapore capital markets, a move that could lead to speedier prosecution and improved regulatory efficiency in the future.
— The Business Times

Rising number of tech grads in Singapore set to plug gap in sector
The number of local university graduates from technology-related courses is set to grow by two-thirds by 2022, amid a hunger for such talent as Singapore embarks on its Smart Nation journey.
— Straits Times (annoying popups)

Police defend anti-molestation posters after Aware criticism
The Singapore Police Force has defended a series of crime prevention posters that have been criticised for being insensitive to outrage of modesty victims.
— Straits Times (annoying popups)

Primary 6 pupils graduate from CDAC mentorship programme
Though Primary 6 pupils will receive their Primary School Leaving Examination (PSLE) results only on Thursday, a batch of 12-year-olds had their own graduation ceremony on Saturday.
— Straits Times (annoying popups)

NTU aims to admit 50% of its students using broader criteria
Five years ago, about 90 per cent of Nanyang Technological University (NTU) undergraduates were admitted based solely on their A-level or polytechnic grades, with the rest needing interviews, portfolios and aptitude tests to supplement their grades to secure a place.
— Straits Times (annoying popups)

Is Singapore serious about going car-lite?
Getting out of a taxi in Beijing the other day, I was almost run over by an e-scooter.
— Straits Times (annoying popups)

New private home launches taking off as resales slow
While new private home sales appear to be on the rebound, underpinned by higher prices of new launches and resilient demand amid an uncertain economic climate, the outlook may not be as good for resale condos.
— Straits Times (annoying popups)

Bukit Batok fire: Town Council investigating contractor’s claim that fire hose reel was working, says MP Murali
The Jurong-Clementi Town Council is investigating claims by the contractor responsible for maintaining the fire hose reels at Block 210A Bukit Batok Street 21 that they were in working condition, after firefighters were unable to use them during a blaze at a flat earlier this month.
— Channel NewsAsia (very annoying popups)

The case of e-wallets: which e-payment apps do Singaporeans use the most?
The study pictures the developments of e-wallets or e-payment apps via vital app metrics such as Monthly Active Users (MAU) and total downloads in the past 8 quarters.
— e27

Home care start-up matches caregivers with seniors who need help
As a child, Ms Gillian Tee could not stand visiting nursing homes as they reminded her of the experience of her elderly nanny, who suffered from bone and breast cancer.
— Straits Times (annoying popups)

Why you should invest with a good margin of safety
As the Nasdaq and the S&P 500 index trade at all-time highs, it is opportune to examine whether our portfolio would cushion us with an acceptable margin of safety in the event of severe market stress.
— Straits Times (annoying popups)

Temasek Foundation partners US-based startup for outdoor cooling solution
SINGAPOREANS’ days of avoiding outdoor dining for fear of sweating into one’s meal might soon be over.
— The Business Times

Domestic helper shares touching perspective on earning elderly employer’s trust
Should domestic helpers in Singapore be paid more than $600 a month? A recent survey by global market research firm YouGov found local respondents divided on this, and the topic has also invited a flood of comments online.
— The Pride

CPF rejects application of 56-year old heart patient to withdraw from his CPF account, saying he is ‘not physically incapacitated’
Mr Sim Kay Chuan, a 56-year-old Singaporean who suffered from heart problems in 2015 had an operation two years ago, leaving his heart’s left ventricular ejection fraction (LVEF) at 37% performance.
— The Online Citizen

Mother gets detention order for attacking teenage daughter
A woman who was upset over her husband’s extra-marital affair slit her own arm and hit her teenage daughter’s head with a chopper.
— Channel NewsAsia (very annoying popups)

Son’s words spur parents to foster more kids
When housewife Lourdes Thomas Audrey and her husband took in their first foster child 15 years ago, the pain of separation after six months was enough to make them think of never doing it again.
— Straits Times (annoying popups)

It Changed My Life: How Jackson Aw built a multimillion-dollar toy empire with $20,000 loan
Mr Jackson Aw looks at his cargo pants and says ruefully: I guess I have grown up.
— Straits Times (annoying popups)

Father accused of scalding son to death has low intellect, was in boys’ home
The background of a father accused of killing his five-year-old son was revealed in court on Friday (Nov 15), with a picture painted of a child with an absent mother and who stayed in a boys’ home.
— Channel NewsAsia (very annoying popups)