Singapore morning news for May 1 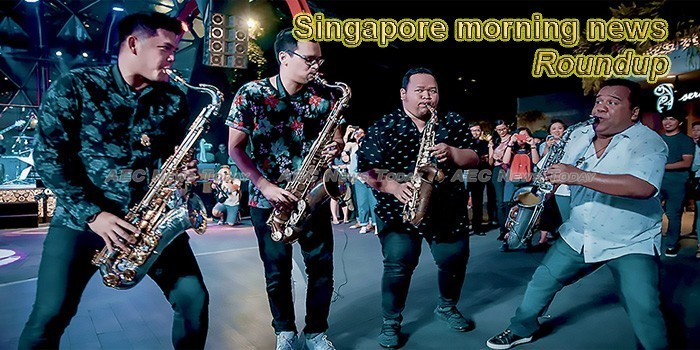 Singapore workers more anxious about change than losing their job to automation
Singapore workers are less anxious about potentially losing their jobs due to automation than they are about having to learn new skills or change the way they perform their tasks. Most also welcome workplace automation as a positive progress as these tools simplify work processes and reduce repetitive.
— ZD Net

Singapore manufacturers, services firms less upbeat about next 6 months
MANUFACTURING and services firms in Singapore have become less optimistic about business prospects in the next six months, although both sectors expressed overall slight positive sentiment, two surveys released on Tuesday have found.
— The Business Times

Singapore Airlines, SATS extend partnership with new five-year contract commitment
Singapore Airlines (SIA) and SATS Ltd have agreed to renew a suite of aviation services contracts for the next five years as part of their bid to strengthen Singapore’s overall competitiveness as a hub.
— The Edge Singapore

Singapore fake-news bill raises fears of censorship
Not much good, according to human rights groups and civil society activists in Singapore, the Asian nation that has become the latest country on track to pass a law about fake news.
— Coda Story

Strong labour movement remains ‘crucial’ to Singapore: PM Lee
In his May Day Message on Tuesday (Apr 30), Mr Lee also commended the work of the Labour Movement, pointing out that it has “good reason” to be proud of its record over the last 50 years.
— CNA  (very annoying popups)

Singapore manufacturers, services firms less upbeat about next 6 months
MANUFACTURING and services firms in Singapore have become less optimistic about business prospects in the next six months, although both sectors expressed overall slight positive sentiment, according to two surveys released on Tuesday.
— The Business Times

POFMA will likely cover private messages such as WhatsApp, FB messaging
The proposal of the Protection from Online Falsehoods and Manipulation Act (POFMA) have people concerned over the scope of the legislation.
— The Online Citizen

LTA announces ERP increases at certain points, starting May 6
Higher charges at two Electronic Road Pricing (ERP) gantries during peak hours will be implemented starting May 6. On April 29 (Monday), the Land Transport Authority (LTA) announced the increase in rates after its quarterly review of traffic conditions on roads and expressways.
— The Independent

Crawling to extinction: Singapore turtle haven fights for life
PICTURES AND VIDEO BY THEODORE LIM by Theodore Lim Hundreds of turtles and tortoises, including rare and endangered species, face an uncertain future after their Singapore sanctuary – a Guinness World Record holder – was forced to relocate due to government redevelopment plans.
— The Online Citizen

Singapore not immune to “voyeurism”; effects of being the victim of spycams and digital phones go beyond physical damage, says expert
Despite Singapore’s conservative stance as a society and the existence of strict guidelines on violence and harassment against women, the country is not exempt from technology-assisted voyeurism.
— The Independent

Ascendas REIT poised to benefit from current rate environment, but yields may be tight
Maybank Kim Eng and OCBC Investment Research are maintaining their “buy” and “hold” calls on Ascendas REIT (AREIT) while raising their price target and fair value estimate to $3.20 and $2.74 from the previous $3.10 and $2.64, respectively.
— The Edge Singapore

Court warns it is not bound by collective-sale deadlines
Singapore’s top court has warned that collective sales committees and their advisers will have to bear the consequences when court rulings cannot be given in time for the sale of a property to be completed.
— Straits Times (annoying popups)

Oxley sells Singapore office tower in US$753m deal
Singapore’s office market is running hot — so much so that debt-laden Oxley Holdings Ltd. just sold a building for S$365 million ($268 million) more than it paid less than 18 months ago.
— The Star Online

SPH and Mediacorp remain silent on criticisms and concerns by various statements published by different groups on POFMA
After the Protection from Online Falsehoods and Manipulation Bill (POFMA) was proposed in Parliament on 1 April, it instantly became the talk of the town and received a high volume of criticism and concerns from various parties across Singapore and around the world.
— The Online Citizen

Work trends change, but a strong labour movement still crucial
A STRONG labour movement remains crucial to Singapore – even as the future of work looks very different, Prime Minister Lee Hsien Loong said in his May Day Message for this year.
— The Business Times

Singapore firms slightly more upbeat about prospects
Singapore’s economy may be picking up after two quarters of slowing growth, with more companies saying they expect business conditions to improve over the next six months.
— Nikkei Asian Review (paywall)

‘Sometimes, the key to innovation may lie outside the company or country’
WHILE having the right champions to convince workers of the need for innovation is key to successful business transformation, companies should not be afraid to tap external resources, where required, to achieve their goals.
— The Business Times

82,000 people in Singapore today have dementia – and 3 in 4 feel ashamed and rejected because of the illness
Conducted by the Singapore Management University (SMU) and Alzheimer’s Disease Association (ADA), the survey found that three in four people with dementia feel rejected and lonely.
— Business Insider

Infocomm-training company expands to meet demand for ICT professionals
It is back to the classroom for 40 adults, who are staring intently at their laptop screens, solving coding challenges assigned by their instructor and designing user-friendly websites.
— Straits Times (annoying popups)

People in Singapore, Malaysia and Indonesia order 3 cups of bubble tea per month, GrabFood says
Tuesday (April 30) might be National Bubble Tea Day – but you can be sure that lovers of the addictive drink are indulging way, way more than just once a year.
— Business Insider

Singapore morning news for May 29