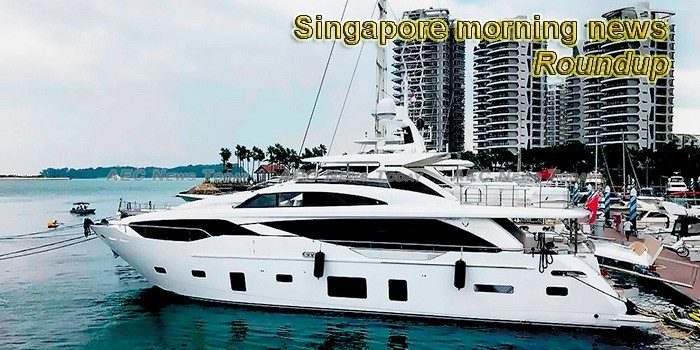 Perpetrators of SingHealth breach identified as Whitefly in new report
The perpetrators of the cyber attack on SingHealth in July 2018, which saw 1.5 million patient records being stolen has been identified in a new research report by cyber security company, Symantec.
— The Edge Singapore

Help for workers a key focus for Budget debate beginning today
Getting the Singaporean workforce to be more “future-proof” amid technological and economic disruptions will be a key focus for MPs when the debate on this year’s Budget begins on Tuesday (Feb 26).
— Straits Times (annoying popups)

Singapore hires global hackers to get rid of 26 bugs in govt offices
From December 2018 to the early part of January this year, Singapore suffered from several serious hacking attacks with over 400 hackers trying to penetrate the city-state’s government online sites.
— The Independent

Secondary school posting from 2024: MOE details range of PSLE scores needed for each scoring band
The Ministry of Education (MOE) has detailed how students going into Secondary 1 from 2024 will be offered subjects and the levels they will be able to take them at.
— Channel NewsAsia (very annoying popups)

Group That Stole Singapore Health Records Persistently Attacked Country
A hacking group behind the theft of millions of health records in Singapore had persistently attacked organizations in the city-state, targeting industries including media, telecommunications, defense and energy, a cybersecurity company said.
— The Wall Street Journal

What a Singapore Strait traffic jam says about the world economy
Flying into Singapore’s Changi Airport, visitors often remark on the hundreds of vessels, from supertankers to freighters, anchored along the coastline.
— Today Online

Temasek-backed Impossible Foods to contest Bill Gates’ Beyond Meat in Singapore
Starting today, blocks of Impossible Foods Inc.’s plant-based meat will be delivered to eight restaurants in Singapore to be made into a variety of cuisine from burgers and ‘meatballs,’ to char kway teow and ‘beef’ Wellington.
— The Edge Singapore

Property moguls top Singapore’s richest: Forbes
A total of 22 Singaporeans made it to Forbes magazine’s list of billionaires for 2019, with real estate tycoons Robert and Philip Ng taking the lead with a net worth of US$12 billion, reported the Straits Times.
— Yahoo News Sg

MOH to ban artificial trans fat in cookies and noodles
To cut the risk of cardiovascular disease, the Ministry of Health is planning an outright ban on partially hydrogenated oils (PHO) which are a key source of artificial trans fat.
— Straits Times (annoying popups)

‘Heaps’ of flammable items impeded firefighting efforts at Bedok HDB flat
About 50 residents were evacuated from a Bedok North Housing Board block after a fire broke out in a unit on Wednesday afternoon (March 6).
— Straits Times (annoying popups)

PM Lee wrote that he’ll “listen to all ideas” to make Singapore’s education better, so netizens start weighing in
Prime Minister Lee Hsien Loong posted a link to the announcement in Parliament on Tuesday of Education Minister Ong Ye Kung concerning the phasing out of secondary school streaming by 2024.
— The Independent

Ms Teo: Govt, unions and employers all agree retirement, re-employment ages of elderly should be raised
In Parliament today (5 Mar), Manpower Minister Josephine Teo told Parliament that the Government, unions and employers have all agreed to raise the retirement age beyond 62 and re-employment age beyond 67.
— The Online Citizen

Residents can soon book neighbourhood facilities, get parking receipts on MSO’s OneService app
The Municipal Services Office (MSO) will introduce new features to its OneService app from this year, which will make it more convenient for residents to perform simple transactions and engage one another, Minister for Culture, Community and Youth Grace Fu said on Wednesday (Mar 6).
— Channel NewsAsia (very annoying popups)

What Investors Should Know About Share Buybacks by Singapore-Listed Companies in February 2019
In February 2019, 15 companies repurchased 20 million shares or units for S$32 million.
— The Motley Fool

Don’t know what to eat? Let TabSquare personalise your menu
It was a busy lunchtime crowd at the OLDTOWN White Coffee restaurant at Suntec City Mall.
— The Edge Singapore

Calvin Cheng gets riled up at SDP: Our education system is based on the Brits, does Chee Soon Juan want to claim credit for that too?
Following the announcement by Education Minister Ong Ye Kung to abolish secondary school streaming in 2024, there was much approval from the public.
— The Independent

S’pore signed a water agreement with Indonesia in 1991, but it never came to pass
Changing domestic circumstances in Indonesia disrupted the project.
— Mothership

Having children and raising them properly and responsibly is a marathon race
I refer to the news that Josephine Teo has called on young people to tell her government what is it that they want in order to have more children. I am not optimistic.
— The Online Citizen

Train disruption along DTL on Wednesday morning
The Downtown Line (DTL) train service was disrupted this morning (6 March) due to signaling fault, according to a later statement tweeted by SBS Transit. The train delay occurred since about 8am until after 9am.
— The Online Citizen

Singapore’s gender wage gap widened in 2018
Singapore has one of the world’s strongest economies and richest populations. However, it’s gender wage gap grew in 2018. We explored potential causes of the gap and this recent trend. Singapore’s economy is a world leader in many respects.
— The Online Citizen

SDP claims credit for proposing that streaming be scrapped in schools
Singapore Democratic Party (SDP) issued a statement concerning a decision announced yesterday by the Education Minister Ong Ye Kung to abandon streaming in schools by 2024.
— The Independent

Worker outcomes tied to grant funding need not be wage increases: Koh Poh Koon
THE tying of worker outcomes to grant funding will take place via a “flexible engagement” between Enterprise Singapore and firms, and may not necessarily take the form of wage increases, Senior Minister of State for Trade and Industry Koh Poh Koon told media on Wednesday morning.
— The Business Times