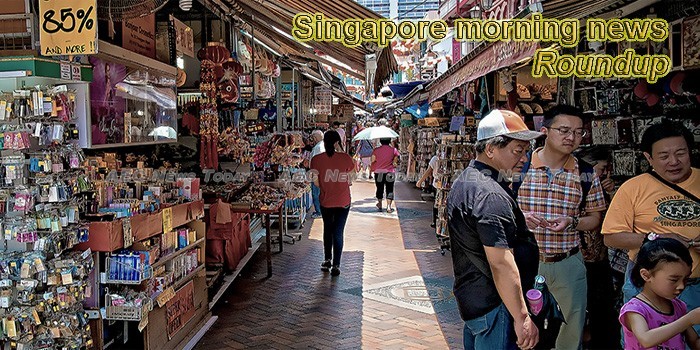 Adaptation or innovation for Singapore’s armed forces?
Singapore is gradually unveiling its military modernisation plans for the Singapore Armed Forces. The development trajectory will be shaped by both adapting emerging critical technologies to new security requirements and improving institutional agility to exploit these new technologies.
— East Asia Forum

The Guide to Employment Permits for Foreign Workers in Singapore
For expatriate workers and their employers in Singapore, understanding the process to obtain a valid employment permit is vital.
— Asean Briefing

30 by 30: Boosting food security in land-scarce Singapore
In an effort to improve its food security, Singapore has set its sights on increasing its food production capabilities by threefold over the next ten years.
— Asean Today

Explainer: Why sand is so highly valued and the controversy surrounding cross border trade
A short documentary by a Cambodian filmmaker that claimed Singapore has imported over “80 million tons of sand worth more than US$740 million (S$999 million) from Cambodia” went viral here recently.
— Today Online

From hardship to hope, Singapore’s migrant poets find their voices
In dorms on Singapore’s fringes or employers’ backrooms, a growing number of migrant workers are using poetry to shed light on their hidden struggles and reconnect with their roots.
— Today Online

Why Singapore should be your next holiday destination
The island of Singapore – meaning Lion City – is a prosperous little state off the southern tip of Malaysia. It’s a cosmopolitan, tolerant home to a local population with roots in China, Malaysia and India, as well as a large expat community.
— Whatson

A light fantastic trip of a lifetime in Singapore
TO A FUNKY soundtrack, 12 giant illuminated, canopied structures start to pulse and shimmer in time to the music. It’s like Avatar meets Saturday Night Fever as we stand in awe, watching the dazzling display of light and sound gather momentum.
— Express.co

Made-in-Asean kopi goes under the hammer in first-ever Singapore coffee auction
White bid placards in hand, over 40 people gathered in a hall at the Sands Expo and Convention Centre on Friday for an auction with an aromatic twist.
— Malay Mail

University builds bridges to innovation
Many Singaporeans would know of the delivery service Ninja Van. Those into luxury goods would likely be aware of Reebonz, the e-commerce platform for buying and selling luxury goods.
— Straits Times (annoying popups)

Water pipe collapses in Yishun mall carpark
A pipe gave way in the carpark of Yishun 10 Multiplex on Saturday evening (March 23), causing water to spray from the damaged pipe.
— Asia One

Commentary: From ice cream to chatbots – how TACs are driving transformation in Singapore
Just as trade associations and chambers (TACs) play a critical role in driving transformation and growth, they too will have to transform to stay relevant for the future, says SBF chairman Teo Siong Seng.
— Channel NewsAsia (very annoying popups)

Right timing: STI stays intact, but Hong Fok is at extreme overbought high
Although quarterly momentum appears ambivalent as it is consolidating beneath its own moving average, prices are intact.
— The Edge Singapore

Race and religion: The futility of a sanitised debate
Parliament will have “a proper debate” on issues like hate speech, race and religion next month, said K Shanmugam on March 19 at the 15th Religious Rehabilitation Group retreat.
— The Independent

Boost users can use their e-wallets in Singapore, Thailand by second quarter
Axiata Digital Services Sdn Bhd, the owner of Boost, the homegrown e-wallet, hopes to make it possible for Malaysian users to make cross-border payments using the platform in Singapore and Thailand by the second quarter of this year.
— Malay Mail

“Revealing the past convictions of the man who drove PM Lee’s son is unconstitutional” – M Ravi
Lawyer M Ravi It has recently been reported that lawyers in Singapore are divided over a police statement on the past offences of a man who circulated videos of PM Lee Hsien Loong’s eldest son.
— The Online Citizen

Shower, sleep or study? Singaporeans would rather game
Singaporeans spend the most time playing video games compared with other gamers in Asia.
— Today Online

Till sickness do us part
t was turning into a long-drawn-out ordeal. For six weeks, Angeline Yong’s septuagenarian father had complained of pain in his stomach, but doctors at the GP clinics simply sent him home with instructions to “eat more regularly”.
— The Edge Singapore

Impossible foods in Singapore: does it taste like real meat?
The Impossible Burger by Impossible Foods. It’s meatless but yet it’s meaty.
— Asia One

Telemedicine startups confront limits of diagnosis over video
TELEMEDICINE has its attractions in that the use of telecommunications technology enables doctors to overcome the barrier of distance to diagnose and treat patients, even those in rural areas.
— The Business Times

Nursery supplier found guilty of giving bribes worth S$143,000 to Island Landscape director
He gave the director of a landscaping and plant nursery company S$143,000 in bribes, hoping it would boost his own business.
— Today Online

Virtual reality headsets transcend from gaming to helping users experience dementia firsthand
The latest Well-being of the Singapore Elderly study conducted by the Institute of Mental Health in 2015 indicated that an estimate of 1 in 10 people aged 60 and above in Singapore has dementia and that the number is expected to rise above 100,000 in the next few years.
— The Online Citizen