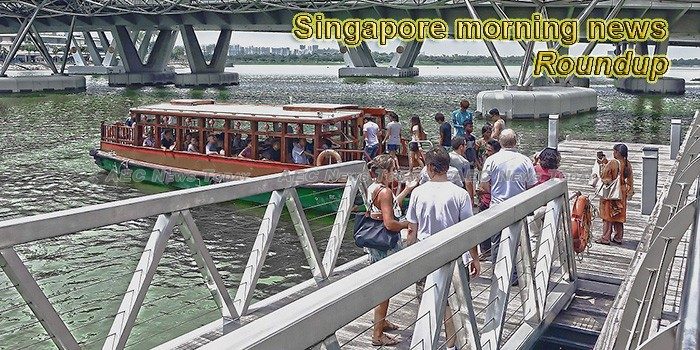 MINDEF refutes claims that acquisition of F-35 fighter jets by RSAF is to align itself with US
The Ministry of Defence (MINDEF) stressed that the acquisition of F-35 fighter jets by the Republic of Singapore Air Force (RSAF) is for Singapore’s own defence deterrence and not directed against, or to align itself with, any particular country.
— The Online Citizen

Singapore retail sales rise 7.6% in January
RETAIL sales in Singapore were up 7.6 per cent year on year in January, recovering from December’s 5.8 per cent slump, according to a Department of Statistics (Singstat) statement on Tuesday.
— The Business Times

Singapore vulnerable to dangers posed by “critical infrastructure failure” in Southeast Asia: IMDA board member, on recent cybersecurity breaches
Singapore is vulnerable to risks posed by “critical infrastructure failure” in the Southeast Asian region, particularly in terms of cybersecurity breaches, said Ayesha Khanna, a board member of the Info-communications Media Development Authority (IMDA).
— The Online Citizen

Vietnam-Singapore Defense Relations in the Headlines With Military Chief Introductory Visit
Late last month, Vietnam’s deputy defense minister and military chief of staff paid a visit to Singapore as part of a two-country trip that also included Japan.
— The Diplomat

Investors Set to Lose Up to 90% on Singapore Water Debacle
The catastrophic slump of Singapore’s much-vaunted water and power company, Hyflux Ltd., has stunned 34,000 retail investors who were lured by the promise of a 6 percent annual return forever from a company that seemed to have a gold seal of government approval.
— Bloomberg

National Research Foundation to allocate S$200m to upgrade Singapore’s supercomputing capability
SINGAPORE’S National Research Foundation (NRF) will be setting aside S$200 million to upgrade the Republic’s supercomputing capability, network speed and quality for access by all institutions of higher learning and research institutions.
— The Business Times

SilkAir says grounding of Boeing 737 MAX fleet will impact flight schedule
The temporary grounding of SilkAir’s fleet of six Boeing 737 MAX aircraft from service on Tuesday (Mar 12) will have an impact on its schedules, the airline said.
— Channel NewsAsia (very annoying popups)

MRT passengers from Ang Mo Kio rode the train with doors open
The door of a Singapore MRT train carriage stayed open as it travelled on the North-South line from Ang Mo Kio station to Yio Chu Kang. On March 11 (Monday), a video was uploaded on Reddit Singapore.
— The Independent

Survey: 35% think Heng can understand ordinary Singaporeans but 21% doubt so
Current Finance Minister Heng Swee Keat has now been portrayed in media outlets since his appointment as 1st assistant Secretary-General of People’s Action Party as the most likely candidate to be the next Prime Minister of Singapore.
— The Online Citizen

Building formerly known as Cecil House up for sale again after major revamp
A standalone building at 139 Cecil Street is up for sale again via an expression of interest exercise after an extensive revamp, said real estate firms CBRE and JLL in a statement on Tuesday (March 12).
— Straits Times (annoying popups)

Singapore’s shared bike pool set to shrink as Mobike calls it quits
From over 100,000 shared bicycles at its peak in September last year, Singapore could soon have just about 3,500, as major operators are pulling out of the market amid financial troubles.
— Today Online

Wilmar kept at ‘neutral’ by CGS-CIMB on plans to buy 50% of Goodman Fielder
CGS-CIMB Research is “neutral” on Wilmar’s plans to buy the remaining 50% stake in Goodman Fielder (GF) as the acquisition deal should not impact near-term earnings.
— The Edge Singapore

Hiring intentions for employers across Singapore in Q2 2019
Hiring activity in Singapore is expected to remain modest in Q2 2019, with employers reporting a seasonally-adjusted net employment outlook of +11%.
— Human Resource Online

Singapore nightclub reveller fined RM7,500 for leaping onto roof of BMW
A nightclub reveller who downed six bottles of whisky with friends while celebrating his birthday decided to end the night by running over a car – literally.
— The Star Online

4 great things to do in Singapore this week (March 11-17)
If you have time on your hands this week and you worry that it may not be used productively, then fret no more as there are several worthwhile activities in store for you right here in Singapore.
— The Independent

The Singapore Grip: Everything you need to know
Fans of hit period dramas Poldark and Victoria will be no doubt excited to hear that the production company behind the shows is working on the adaptation of a WW2-set novel.
— Good Housekeeping

Pound rallies as May gets new Brexit deal for parliament vote
The pound advanced for a second day as the UK government said it had secured changes to its divorce deal from the European Union and planned to hold a vote in parliament.
— The Edge Singapore

Singapore Medical Council ‘not aware’ of any action taken against man who deceived psychiatrist
No action appears to have been taken against the caller who posed as a patient’s husband to deceive psychiatrist Soo Shuenn Chiang into writing a memo, even while the authorities are examining the case.
— Today Online

3 non-office REITs to tide investors through an uncertain 2019: OCBC
OCBC Investment Research is maintaining “neutral” on the Singapore REIT (S-REIT) sector with a preference for retail and hospitality REITs over their office counterparts for their comparatively conservative asset valuations.
— The Edge Singapore

Hyflux investors could end up losing 90 percent of their capital in upcoming restructuring
Investors in Hylux Ltd, the country’s controversial water and power company, may stand to lose the most amidst the troubles the company has been facing. Some of the 34,000 retail investors could lose up to 90 percent.
— The Independent

Gathering of migrant workers outside old CPF building not a protest, did not breach Public Order Act: SPF
The gathering of 30 migrant workers outside the old Central Provident Fund building site last Wed (6 Mar) could not be classified as a protest, as the workers did not gather for the purpose of promoting a cause or a campaign, or to endorse or object to the views or actions of any persons or groups, said the Singapore Police Force (SPF).
— The Online Citizen

‘India retains 3rd spot in Singapore’s visitor arrivals’
India continues to be the third largest visitor source market for Singapore contributing over one million visitors annually for the fourth consecutive year, a senior official of the Singapore Tourism Board (STB) said here on Tuesday.
— Hindu Business

Second phase of CPFIS fee cuts deferred to Oct 1 next year
This is in response to industry feedback that financial advisers require more time to adjust to the revised CPFIS fees structure, the Ministry of Manpower said on Tuesday.
— Straits Times (annoying popups)

MHA among “relevant parties” consulted by IMDA prior to approving Watain concert; MHA cited “public order” as grounds for cancellation: IMDA
The Ministry of Home Affairs (MHA) was among the “relevant parties” consulted by the Infocomm Media Development Authority (IMDA) prior to approving the licence for Watain’s concert, the Authority said in a statement on Tue (12 Mar).
— The Online Citizen

Watain ban: Churches say they respect freedom of choice but will protect social cohesion, sacred beliefs
The Catholic Church and Cornerstone Community Church have said that while they respect freedom of choice in entertainment, they will raise concerns to the authorities and the public to protect social cohesion and what is sacred to (their) beliefs.
— Channel NewsAsia (very annoying popups)