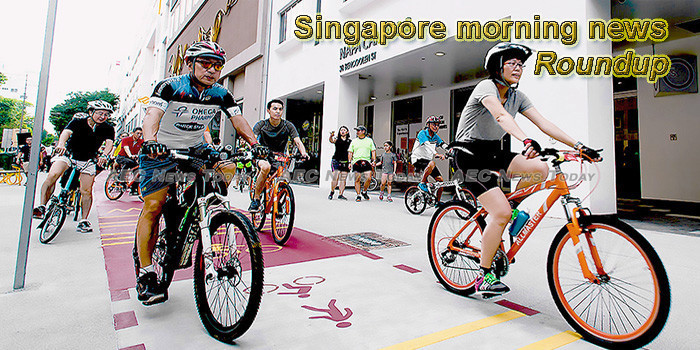 US Treasury ‘monitoring list’: The Singapore puzzle
LAST week, the US Treasury placed Singapore on its so-called Monitoring List for currency practices of major trading partners, implicitly flagging the Republic as a potential currency manipulator.
— The Business Times

Burnout likely a common problem here, Singaporeans among most stressed at work globally
When Ms Le Giang, 37, started a business selling Vietnamese street food in a kopitiam here nearly two years ago, she looked forward to being her own boss.
— The Straits Times

From early adopter to e-payment paradise: Singapore can lead the world
Singapore’s position at the forefront of digital financial technologies is not a recent thing, though today it’s better-placed than ever.
— CNA

How long can Carousell go without monetisation breakthrough?
AS it enters its eighth year, Singapore’s marquee startup, Carousell, could face pressure to show that its monetisation strategy is actually getting somewhere instead of being stuck on a merry-go-round of losses.
— The Business Times

Singapore gets rid of ranking system from report cards, says learning is not a competition
With an aim to make education free of competition, the Education Minister of Singapore Ong Ye Kung proposed the idea to stop examination ranking. Therefore, nobody should know who stood first in rank or last.
— India Today

Housing loans shrink for a third consecutive month
HOUSING loans in Singapore shrank for a third month in April, leading a continued contraction in consumer loans, preliminary data from the Monetary Authority of Singapore (MAS) showed on Friday.
— The Business Times

SingPost to do more to improve service standards amid ‘early signs’ of improvements: Singapore chief
Following a spate of high-profile delivery lapses, national postal services provider Singapore Post (SingPost) will do more in the coming months to improve standards in its postal operations and win back the public’s trust.
— Channel NewsAsia (very annoying popups)

Singapore’s court verdict
Nigeria High Commission in Singapore came into public focus last week. Its leadership has been celebrating the verdict of that country’s Supreme Court that freed a Nigerian who had been facing death sentence for drug related offence.
— The Nation

Old, frail… and a criminal: The rise in Singapore’s silver criminals
By the time he was sent to prison in 2010 for drug offences, Peter (not his real name) had already been in and out of prison at least eight times.
— Straits Times (annoying popups)

SingPost to do more to improve service standards amid ‘early signs’ of improvements: Singapore chief
SINGAPORE: Following a spate of high-profile delivery lapses, national postal services provider Singapore Post (SingPost) will do more in the coming months to improve standards in its postal operations and win back the public’s trust.
— Channel NewsAsia (very annoying popups)

Singapore Is Seeking to Become a High-Tech Center
Armed with incentives, Singapore has been increasing its efforts to get technology businesses and investors interested in the country.
— VOA

63-year-old man dies from dengue in 4th death this year
A 63-year-old man has become the fourth person to die from dengue this year, the Ministry of Health (MOH) and the National Environment Agency (NEA) said on Friday (May 31).
— Channel NewsAsia (very annoying popups)

K-pop in search of hidden talents in Singapore for the Changwon K-pop World Festival
Do you have what it takes to be the next K-Pop star? The ninth edition of the Changwon K-Pop World Festival, which is the largest K-Pop competition in the world, has begun and all K-Pop enthusiasts are invited to join. Preliminary rounds are being held in their respective countries. …
— The Independent