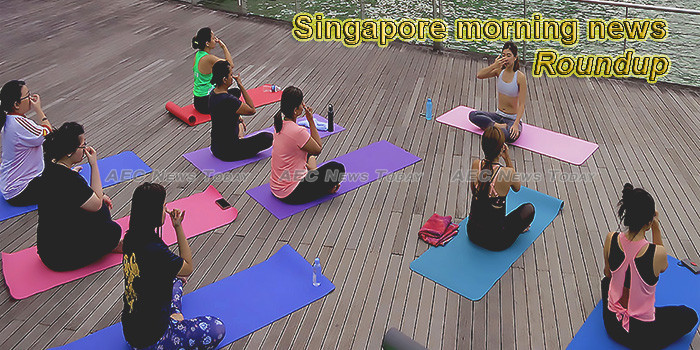 SP Telecom and Nokia team up to bring Singapore’s first 5G fixed network by 2020
Singapore is consistently one of the world’s best places to connect to the internet, and if all goes well, the experience will soon get even better.
— Business Insider

Singapore puts shoebox-size satellite into orbit to test next-gen cyber security technology
A nanosatellite, developed by a team of Singapore researchers looking for a breakthrough in cyber security and data encryption, has been put into orbit.
— The Straits Times (annoying popups)

Online users ridicule Heng Swee Keat’s comment on work-life balance for young couples
The Government will soon be introducing a series of dialogues to help find solutions for young parents to strike a balance between work and life.
— The Online Citizen

NUS and NTU tie as Asia’s top university
Nanyang Technological University (NTU) has joined the National University of Singapore (NUS) in the top spot in Asia in an annual global ranking of universities that is read by educational institutions and governments.
— Straits Times (annoying popups)

Weekly dengue cases in Singapore spike to highest in more than 3 years
There were a total of 468 reported dengue cases in the week ending Jun 15, the highest since March 2016, according to data by the National Environment Agency (NEA).
— Channel NewsAsia (very annoying popups)

Sea zones and floating cities: a prime opportunity for Singapore
SINGAPORE needs to fundamentally transform its international economic relevance through a focus on developing itself as an Indo-Asia Pacific super-connector. And this can be achieved through hosting floating charter cities (FCCs) in special governance zones.
— The Business Times

Almost an accident a day on Singapore’s escalators, and the reasons why
Most of these accidents were caused by ‘user behaviour’, such as using prams on escalators, running on them and not holding the handrails. Talking Point investigates.
— CNA (very annoying popups)

5 Things to Know About Public Housing in Singapore
From grants to upgrading programmes, here’s what the Government has been doing to ensure that HDB flats remains a good home and a good store of value for all Singaporeans.
— gov.sg

Chart of the Day: Decentralised offices represented nearly a quarter of office stock in Q4 2018
Total decentralised office stock in Singapore has grown by approximately 1.4 times from 5.9 million sq ft in 1998 to 14.4 million sq ft in 2018, according to property consultant CBRE, attesting to the progress made by the government in enhancing the attractiveness of regional and fringe commercial hubs. In comparison, office stock in the CBD rose by only 0.6 times over the same period.
— Singapore Business Review

Online users raise privacy concerns with the soon-to-be implemented satellite distance-based ERP
Come 2020, the old Electronic Road Pricing (ERP) system will be replaced with a new one that will charge motorists based on the distance they travel on congested road, instead of the flat-fee that they currently pay.
— The Online Citizen

11 startup events happening in Asia that might help give you a boost!
The month of June is brimming with awesome tech events across Asia! Here’s a list of the ones we think you should check out! We are already halfway through June but so many things are still in store for Asia’s vibrant tech ecosystem happening this month. If you’re looking for the right opportunity to learn […]
— e27

Which Singapore Bank Has Increased Its Dividends the Most over the Years?
An interesting look at which of the three big Singapore banks has increased its dividends the most, and also the yields at which each bank traded at over the last five years.
— The Motley Fool

11 colourful Merlions to tell S’pore story around the island
The much-photographed Merlion will finally have company with 11 colourful versions of the mythical creature sitting around the Fullerton precinct.
— Straits Times (annoying popups)

Students to be youth envoys for UN treaty signing in August
Students will play the role of youth ambassadors in August, taking foreign guests in the Republic for the signing of an international treaty around Singapore and through its history and heritage.
— Straits Times (annoying popups)

Birds saved by Sin Ming residents – residents say its red junglefowl, authorities disagree
Residents of Sin Ming Court decided to take fate into their hands this time and voted to allow the red junglefowl in the area to continue roaming free.
— The Online Citizen

One in three Singapore bosses have demoted employees: Robert Half poll
NEARLY a third or 30 per cent of business leaders in Singapore have demoted an employee at their company, according to findings from an independently commissioned study by specialist recruitment consultancy Robert Half.
— The Business Times

Watchdog to keep an eye on charities that run businesses
The charities watchdog will be paying more attention to groups that venture into business, flagging conflicts of interest that may arise and the need for enhanced guidelines to protect the interests of charities.
— Straits Times (annoying popups)

Singaporean millennials are divorcing less, but why?
Sometimes, millennials get a bad rep in the media for all kinds of things. But, it seems like they have been driving divorce rates lower in Singapore for the past decade.
— The Online Citizen

Change in virus strain poses risk to former dengue patients
More than 50,000 people who came down with dengue fever between 2013 and 2015 may have to take extra precautions against being bitten as the dominant virus type circulating now is different from the one in those years.
— Straits Times (annoying popups)

4 Reasons Why Parkway Life REIT Is a High-Quality REIT
Parkway Life REIT (SGX: C2PU) is one of two healthcare REITs listed on SGX. Here are four reasons the REIT has superior investment characteristics.
— The Motley Fool

Evonik CEO sees S’pore as gateway for its growth in South Asia
June 19, 2019 5:00 AMA German chemical giant that has just opened another plant in Singapore believes it can still achieve significant expansion despite the damage the trade war is inflicting.
— Straits Times (annoying popups)

Bystander implicated in police chase gets probation for pushing, cursing officers
A 24-year-old woman who was waiting for a taxi along Stamford Road last year pushed and cursed at the police after she was stopped for looking flushed by officers chasing two unrelated suspects in the vicinity.
— Channel NewsAsia (very annoying popups)

Activist Roy Ngerng, “Singapore is mini-China,” when it comes to speaking up
Roy Yi Ling Ngerng, a Singaporean activist who has been based in Taiwan for some years now, compared Singapore, Taiwan and Hong Kong when it came to freedom and democracy and drew analogies with China.
— The Independent

Activist Roy Ngerng urges Singaporeans to be inspired by the fight for democracy and freedom in Hong Kong
The Hong Kong protests have had a ripple effect across the globe, even in Singapore, sparking conversations and debate over the issues being protested in Hong Kong and shining a light on certain matters at home as well.
— The Online Citizen

3 Things Stock Market Investors Must Know About Interest Rates
Don’t bother with interest rates – focus on the health and growth of the businesses that are behind the stocks.
— The Motley Fool