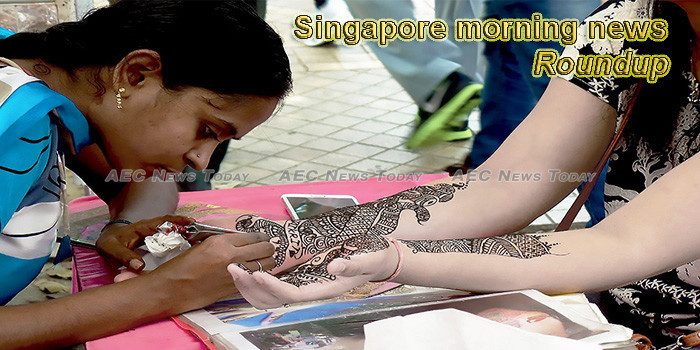 Singaporeans need to be more connected to Asean to remain competitive: Panel
Singapore needs to be more plugged into Asean and understand the region in order to seize the geographical advantage it has and stay ahead, Economic Development Board managing director Chng Kai Fong said on Monday (Jan 28).
— Straits Times

EU Parliamentarians asks Singapore for a gesture of goodwill regarding Jolovan Wham’s case, Singapore says no
On 10th January, a member of the European Parliament Jude Kirton-Darling wrote to Singapore’s Ambassador to the European Union, HE Jaya Ratnam requesting a “signal of goodwill from the Singaporean authorities in relation to Mr [Jolovan] Wham’s case”.
— The Online Citizen

Data of 14,200 with HIV leaked online by American fraudster who was deported from Singapore
Confidential information of 14,200 people with HIV, including their names, contact details and medical information, has been stolen and leaked online, and the culprit is an American fraudster, the Ministry of Health revealed on Monday (Jan 28).
— The Nation (very annoying popups)

POLL FINDS SINGAPORE DIVIDED OVER PROSPECT OF THIRD-GENERATION MEMBER OF RULING LEE CLAN ENTERING POLITICS
A rare political poll released in Singapore on Monday shone a light on a topic that thus far had been confined to pockets within the chattering classes: will a “third-generation” member of the city state’s powerful Lee family enter politics?
— SCMP

Doctor who leaked list of HIV-positive people cannot practise and has no access to national health database
The doctor who leaked the details of 14,200 people with confirmed HIV, and another 2,400 of their contacts – including sexual partners and drug users who could also be at risk of infection – is still on the Register of Medical Practitioners.
— Straits Times

Singapore Spectacles: The Hybrid Space Of Technology And Pleasure
I went to Singapore after a cousin of mine who did his MBA there highly recommended that I visit the country on my way to Indonesia.
— Forbes

SGX proposes stricter rules for auditing of listed firms
The Singapore Exchange (SGX) is moving to tighten the auditing of listed companies with two new rules in one of its biggest overhauls of accountancy oversight.
— Straits Times

Bicentennial a time to reflect on how Singapore came into being: PM Lee
THE year 1819 was an important turning point in the country’s history and the catalyst for the beginning of the “modern, outward-looking and multicultural” nation that Singapore is today.
— The Business Times

Sustainability a growing part of corporate agendas: Report
Sustainability is becoming more important to companies though there is still a long way to go for businesses to improve the way they impact society and the environment.
— Straits Times

Bank bonuses flat; but slow job market may block exit to greener pastures
WITH 4th quarter 2018 results streaming out, bankers may be fretting about what bonuses will be coming their way. But with a slow job market – there’re more candidates than jobs – those unhappy with their bonuses may just have to sit out this job-hunting season.
— The Business Times

Brexiteer fantasy of Singapore-style economy will be hard to achieve
As Britain’s political impasse sharpens ahead of its March 29 withdrawal date from the European Union, an idea has gained traction among some Brexiteers – that Britain should become a low tax, low regulation and low public spending paradise in the same mold of the tiny Southeast Asian city state of Singapore.
— CNN Philippines

China slowdown: Concerns over trade flows and investments for Singapore
Singapore is increasingly feeling the fallout from a slowing economy in China, one of its top destinations for non-oil exports and direct investments abroad.
— Straits Times

More support for kids with special needs, Govt to spend $60m a year to subsidise families
Families of children with developmental needs will have better access to early intervention programmes from April 1.
— Straits Times

Too Ugly to Be Saved? Singapore Weighs Fate of Its Brutalist Buildings
On a balmy Friday night, Zara Tan and two friends went drinking at an open-air pop-up bar in Golden Mile Tower, a 1970s-era building with a raw concrete exterior that overlooks Singapore’s financial district.
— The New York Times

Security services provider SIS close to buying majority stake in Singapore firm
“The deal will happen in two tranches, and in the first tranche, SIS would pick up around 60 per cent stake. The remaining stake would be bought based on certain conditions that both the buyer and seller have to fulfil,” said one of the sources.
— The Economic Times

Budget 2019 expected to support vulnerable PMETs: DBS economist
MORE “forceful policy measures” are expected to tackle the rising vulnerability of professionals, managers, executives and technicians (PMETs) in the upcoming Singapore Budget 2019, according to a report by DBS.
— The Business Times

Leaked data sends shockwave through local community of HIV patients
The revelation that the personal information of 14,200 HIV patients was leaked has stunned people living with the virus here.
— Straits Times

PAP town councils to modernise 17,000 HDB lifts across Singapore over next decade
This comes after the 15 PAP town councils finalised plans under the $450 million Lift Enhancement Programme by the Government.
— Straits Times

Singapore housing prices seriously unaffordable: Survey
House prices in Singapore are considered “seriously unaffordable”, with a median multiple of 4.6, which means that the median house price is 4.6 times the city-state’s median household income, according to an annual survey conducted by urban planning policy consultancy Demographia in Q3 2018.
— The Online Citizen

Singtel to develop cyber security solutions for self-driving vehicles with international partner
Telco Singtel will work with a global leader in automotive cyber security – Argus Cyber Security – to create a secure ecosystem to position Singapore at the forefront of connected and autonomous vehicle (AV) technologies, the firms announced on Monday (Jan 28).
— Straits Times

Singapore doodle on Google, did you notice?
Modern Singapore is commemorating its 200th Founding Anniversary Monday (January 28) and Google is celebrating it with a simple yet emblematic special doodle on its search browser.
— The Independent

Singapore’s serious deficit on its possession of safety climate or safety leadership
Singapore seems to have a serious deficit when it comes to possessing a safety climate or safety leadership. Apart from the fatalities in the uniformed services, research into the fatalities at the workplace and in sports also throw up disturbing numbers.
— The Online Citizen

Transit-Mixed Concrete to book loss of RM315,000 from sale of RM1m worth of underutilised assets
Transit-Mixed Concrete announced on Monday (Jan 28) that a subsidiary has agreed to sell certain equipment and machines to concrete supplier Perfect Readymix for RM1.02 million (S$334,332).
— Straits Times

3 REITs With The Biggest Financial Flexibility For Growth
These three REITs have the lowest gearing ratio, which puts them in a good position to fund acquisitions through debt.
— The Motley Fool

Are Singaporean pre-schoolers more independent than we think they can be?
It’s been said before that Singaporeans tend to be helicopter parents. But one group of parents has decided to let go, and send their tiny tots out on their own for the first time, to see the results.
— Channel NewsAsia (very annoying popups)

Bilahari: S’pore must be extraordinary in Southeast Asia, won’t be universally loved
While Singapore is in Southeast Asia, it must be more than the region, and it must leverage on the differences it has with its neighbours to be important.
— Mothership

The Big Read: Why Singapore has yet to become a cycling paradise — and it’s not just about the heat
Experts say cycling as a mode of transport may not always be the most attractive option, when compared with other modes of transport over longer distances.
— Channel NewsAsia (very annoying popups)

Sleeping taxi driver fined S$100 without prior notice for sleeping at HDB loading bay
A distressed taxi driver had the experience of waking up to a summon after sleeping at a loading and unloading bay of an HDB’s void deck. He wasn’t woken up in advance and now had to pay S$100.
— The Independent sg

Man fined for not declaring S$243,000 in cash brought into Singapore
A 43-year-old man was fined S$6,000 for entering Singapore without reporting that the currencies he was carrying exceeded S$20,000, police said on Monday (Jan 28).
— Channel NewsAsia (very annoying popups)

Woman blocks bus and demands the driver takes her back to her desired stop as she missed her stop
A woman who missed her stop on Friday night (25 January) created a commotion and demanded the bus driver to send her back to her desired stop. The entire incident was recorded by netizen Pravin Kumar and he uploaded it on his Facebook page.
— The Online Citizen