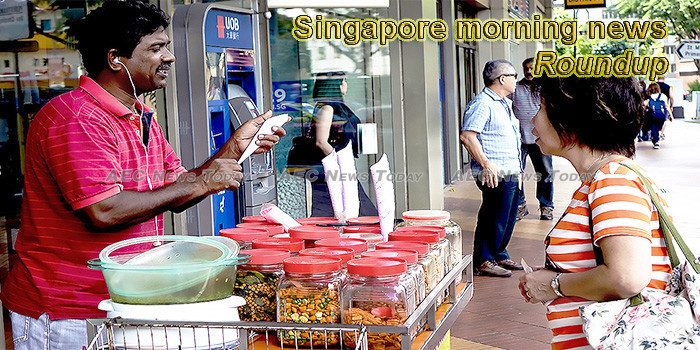 Google in talks for 400,000 sq ft space at Alexandra Technopark
GOOGLE is planning to expand in Singapore, going by market talk that it plans to boost its real estate footprint on the island.
— The Business Times

Uncertainty weighs on Singapore firms with UK ops, businesses fret over chance of a hard Brexit
British Prime Minister Theresa May’s Brexit plans may be in tatters, but Singapore-based Concorde Security is moving ahead with its expansion plans in the United Kingdom.
— Straits Times

Forced labor on foreign domestic helpers in Singapore rampant, says NGO
A report entitled Behind Closed Doors: Forced Labor in the Domestic Work Sector in Singapore releases its conclusion saying that foreign domestic helpers in Singapore are at risk to becoming victims of forced labor. According to the Humanitarian Organization for Migration Economics (HOME), between April 2017 and March last year, 872 workers complained of work-related […]
— The Independent

Singapore qualified to mark its own exams
Barely a year after A-level scripts were stolen in Britain, O-level scripts have gone missing (32 O-level Additional Maths scripts lost in Britain; Jan 15).
— The Straits Times

Switching up pace to narrow Singapore boards’ gender divide
SINGAPORE’s top 100 listed companies appear to be steadily weaning themselves from the ‘all-boys club’ in the boardrooms. In 2013, half of them had zero women while as at end-2018, just-men boards shrank to 25 per cent.
— The Business Times

Southeast Asian nations top global rankings for investment, business
SOUTHEAST Asian nations have dominated a list of best places in the world to invest in or do business for 2018, highlighting the attractiveness of the growing economies in the region amid a bleak outlook for 2019.
— Asian Correspondent

Singapore is right to question university rankings fixation. Research has a social value, too
As any first year Philosophy undergraduate can tell you, discussion and debate have been the beating heart of university life ever since Plato’s Academy.
— South China Morning Post

MOM declines to publish the names of errant companies that discriminate against hiring Singaporeans
Minister of State for Manpower, Zaqy Mohamad, revealed in Parliament yesterday that a total of 521 errant companies that engaged in unfair employment practices were warned or sanctioned by the Ministry of Manpower (MOM) between 2013 and 2017.
— The Independent

How does Singapore deal with the danger of drones in no-fly zones? | Video
Eight unauthorised drones were reported flying within 5km of Changi Airport in the past three years. What measures are in place to counter these errant drones?
— Channel NewsAsia (very annoying popups)

From fighting diabetes to food waste, start-ups cook up new ideas for food
Affecting more than 420 million people globally, diabetes has been described as one of the world’s fastest growing chronic diseases and for Alan Phua, it is one that he lost both his grandmothers to.
— Channel NewsAsia (very annoying poppups)

Singaporeans cancel CNY shopping trips to Malaysia as disputes drag on
Singaporean-organised “shopping tours” into Johor ahead of the Chinese New Year are seeing last-minute cancellations as relations between the two countries tense up over a maritime and airspace dispute, reported Sin Chew daily.
— Today Singapore

Singapore’s Grab can’t afford to fail finance
After sending rival Uber Technologies Inc packing from Singapore and other Southeast Asian markets, homegrown ride-hailing firm Grab has set itself a stiffer target. It wants to be a regional super-app.
— The Edge

Board diversity council expands scope to include female representation in organisations
The Diversity Action Committee (DAC) will widen its scope from January, from increasing representation of women on boards of Singapore Exchange (SGX)-listed companies to include organisations in the people and public sectors.
— Channel News Asia (very annoying poppups)

Experts laud shift but worry about potential loopholes in amended Misuse of Drugs Act
The amended Misuse of Drugs Act that Parliament passed on Tuesday has been applauded by rehabilitation experts for its shift towards rehabilitation of drug addicts, though some wondered if there were loopholes that could increase the chances of a relapse.
— Straits Times

Sea piracy and robbery fell to 12-year low in 2018
There were 76 cases of piracy and armed robbery incidents on the seas around the region last year, down from 101 in 2017 and the lowest number since the Singapore-based Regional Cooperation Agreement on Combating Piracy and Armed Robbery against Ships in Asia (ReCAAP) began tracking such figures in 2007.
— Today Singapore

Fewer mynahs roosting in Potong Pasir
Potong Pasir residents who have had their sleep disrupted by the cacophony of mynahs squawking can rest more soundly now.
— Straits Times