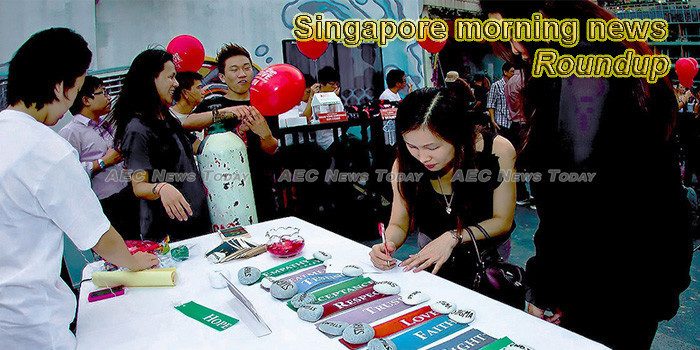 Criticising the PAP is now “undermining national unity”?
In Parliament yesterday (26 Feb 2019), Member of Parliament and Workers’ Party chief Pritam Singh brought the Merdeka Generation Package (MGP) and its timing into sharp focus on day one of the Budget debate yesterday.
— The Online Citizen

Here’s how Singapore’s organisations can retain their top talent
Fostering human connections is a significant factor in retaining employees who value job security, especially in Singapore.
— The Edge Singapore

What it’s like living as a billionaire in Singapore, where wealthy residents are worth a combined $1 trillion and limited land makes owning a house the ultimate ‘status symbol’
Singapore, an island city-state off of southern Malaysia, consistently tops rankings of the most expensive and wealthiest cities in the world.
— Business Insider

Singapore economy expected to moderate towards a more sustainable pace this year: MAS
The Monetary Authority of Singapore (MAS) expects this year’s economic growth to come in at 2.5 per cent or “a touch lower”, bringing it closer to its potential.
— Straits Times (annoying popups)

Timely to diversify Singapore’s funding sources for major infrastructure
AMID a slowing global economy and trade tensions between the world’s two giant nations that could worsen the slump, the Singapore government’s decision to guard the city state’s reserves and instead borrow to partly fund “lumpy” and long-term infrastructure investments is perfectly timed.
— The Business Times (paywall)

Property developer eyes Penang islands as ‘next Singapore’
With Malaysia’s optimistic vision of transforming Penang’s three islands reclamation project into the ‘next Singapore,’ this could be Marina Bay’s closest rival in terms of better infrastructure and ecological landscape.
— The Independent

Singapore reaps literary dividend from migrant culture
Of the 30 people who share MD Sharif Uddin’s workers’ barracks in Singapore, only a handful know that he writes. Uddin, who owned a bookshop in Bangladesh, moved to Singapore in 2008 to join the many thousands of his countrymen who come to the city-state to work in the construction sector — paying $10,000 to an agent for the privilege.
— Nikkai Asian Review (paywall)

Strong FDI flows to Singapore and rest of S-E Asia despite US tax reforms
THE big repatriation of foreign earnings by US multinational corporations appears to have no negative impact on Asian economies – especially Singapore and the rest of South-east Asia.
— The Business Times

9 in 10 graduates of Singapore’s top universities hired within 6 months
The average gross monthly salary of those in full-time permanent employment rose to $3,733 from $3,613 in 2017.
— Singapore Business Review

Singapore outbound travel to US gains traction
Thanks to an increase in direct flight connections and destination awareness, the US is gaining traction among Singaporean travellers, reported travel agents here.
— TTG Asia

Haze, burning smell in Singapore expected if Johor fires continue; second hot spot detected: NEA
A fire in southern Johor, which was the likely cause of the burning smell reported by Singaporeans earlier this week, has been put out, said the NEA.
— Straits Times (annoying popups)

Commentary: Beyond loans and grants, Singapore entrepreneurs should seek out equity investments to grow their companies
The venture capital world pays close attention to which start-ups get investments from the who’s who of the investment world, says NUS Enterprise’s Jonathan Chang.
— Channel NewsAsia (very annoying popups)

Overworked Malaysian, drops dead outside his door just before daily commute from JB to Singapore
A Malaysian, who braved the horrendous traffic between Johor Bahru and Singapore daily to earn just S$1,000, tragically died at his doorstep after suffering a fatal heart attack. The incident occurred on Saturday (23 Feb) morning, according to Malaysian publication, China Press. Chua Beng Thong, …
— The Independent

Singapore economy expected to moderate towards a more sustainable pace this year: MAS
The Monetary Authority of Singapore (MAS) expects this year’s economic growth to come in at 2.5 per cent or a touch lower, bringing it closer to its potential.
— Straits Times (annoying popups)

Growth in Singapore services sector revenue eases to 4.1% in Q4
SINGAPORE’S services industries saw more takings in the last quarter of 2018, although growth was slower than before, according to data from the Department of Statistics (SingStat) on Wednesday.
— The Business Times

HRnetgroup out to nab China’s workaholic job seekers
In some quarters, a lack of work-life balance is not always a bad thing.
— The Edge Singapore

Chee Hong Tat to Workers’ Party: Don’t politicise Merdeka generation package with general election
In response to Workers’ Party (WP) leader Pritam Singh’s speech in Parliament on Tuesday, February 26, Senior Minister of State for Trade and Industry and Education Chee Hong Tat said that it is “misleading” to connect the newly-announced Merdeka Generation Package, as well as the Pioneer Generation Package with the general election.
— The Independent

Investing On Your Own Means You Never Have To Retire
Retirement may sound like a scary word to some, but not to an investor as this is a lifelong activity which can be done at any age.
— The Motley Fool

Transport Minister Khaw Boon Wan to undergo surgery after fracturing arm at home
Apparently he had been a little excited in getting out of bed.
— Mothership

100 community events and projects to be rolled out in Singapore to mark Bicentennial
The Nagore Dargah Indian Muslim Heritage Centre, which has almost two centuries of history, is curating a photo exhibition which matches photographs of 100 Singaporeans with their ancestors.
— Straits Times (annoying popups)

Thomson Medical Group returns to profit; new initiatives to drive growth
Mainboard-listed Thomson Medical Group said on Wednesday (Feb 27) that it returned to profit in 2018, and unveiled a series of plans to drive growth through an integrated service platform at Orchard Road and its first major digital foray.
— Channel NewsAsia (very annoying popups)

New politician on the block gets swarmed by IBs on CPF post
Brad Bowyer, a member of the People’s Voice Party took his Facebook account on Tuesday (26 February) to question why Singapore’s Central Provident Fund (CPF) is giving lesser returns to retirees compared to other countries whose funds are much smaller than Singapore’s.
— The Online Citizen

Singaporean parents are not using child car seats, despite owning them
According to the Singapore Medical Journal, securing children in appropriate child car seats can reduce the risk of serious traffic accidents by 8.4 times.
— The Online Citizen

Bombardier investing S$85m to quadruple size of Singapore aircraft maintenance centre
AEROSPACE giant Bombardier is putting in S$85 million to quadruple the size of its Singapore service centre to 40,000 square metres by 2020, making it the largest business aviation maintenance facility in Asia owned by an original equipment manufacturer.
— The Business Times

Sheng Siong kept at ‘buy’ for defensive stance in supermarket space
Sheng Siong is a “buy” for most research houses. Sheng Siong on Monday announced that its FY18 earnings increased by 1.4% y-o-y to $70.8 million, on the back of a 7.4% increase in FY18 revenue to $890.0 million
— The Edge Singapore

ST Book Club: Dr William Wan on ageing gracefully and dying well
When he turned 61 a decade ago, Dr William Wan made a bucket list of things to do before he dies.
— Straits Times (annoying popups)