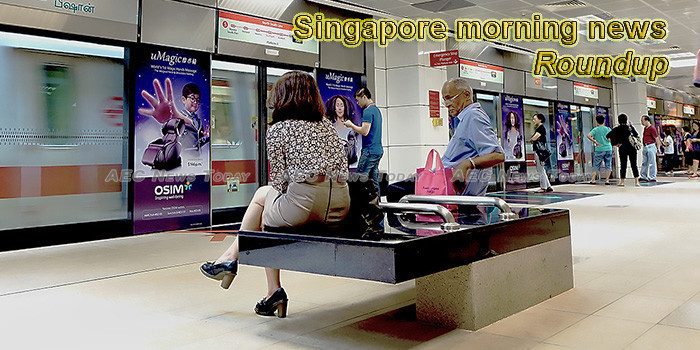 Singapore Has a Better Bali on Its Doorstep, Developer Says
Singapore’s second-largest developer has a suggestion for the government: re-position the billionaire enclave of Sentosa as a tourism mecca like Bali.
— Bloomberg

Singapore wants to remain open to both China and US: Chan Chun Sing
Singapore is looking for a middle ground so it can remain open to both the United States and China amid increasing tensions between the world’s two largest economies.
— The Straits Times (annoying popups)

SembMarine at ‘turning point’ but future order wins critical: analysts
Analysts believe Sembcorp Marine (SMM) could be on the cusp of a turnaround, after swinging out of the red with earnings of $5.9 million for 4Q18.
— The Edge Singapore

Tax hike likely to hit commercial vehicle owners more than diesel car drivers: Experts
With the number of diesel cars rising despite the imposition of a 10-cents-a-litre tax in 2017, experts believe the increase in diesel duty this year is likely to have a greater impact on the commercial vehicle market than on private car owners.
— Today Online

Jolovan Wham fined for organising public assembly without permit, chooses to go to jail instead
Social worker and activist Jolovan Wham was on Thursday (Feb 21) fined S$3,200 over a public assembly he organised two years ago without a permit and refusing to sign a police statement.
–– Channel NewsAsia(very annoying popups)

Malaysia-Singapore water talks slow going, without a resolution in sight yet
Heated talks on the water price review between Malaysia and Singapore is continuing with Attorney-Generals of both countries seeking a resolution.
— The Independent

Law and Foreign Minister shares image of him cradling a cat after his fellow Nee Soon MP got flamed for comments on cat feeders
After Member of Parliament for Nee Soon GRC Dr Lee Bee Wah was bombarded by netizens for wanting to disallow cat feeders to leave food unattended for two hours, Law and Foreign Minister K Shanmugam defended her on this issue.
— The Online Citizen

The Govt will not absorb GST for essential items to help low-middle income families: Heng Swee Keat
The day after he laid out the Government’s economic plan for 2019, Finance Minister Heng Swee Keat fielded questions on the budget on Channel NewsAsia’s Budget 2019 Forum, that was broadcast live on national television and on Facebook.
— The Independent

Health ministry asks medical council to review surgeon’s S$100,000 fine
Amid an outcry among local doctors, the Ministry of Health (MOH) has tasked the Singapore Medical Council (SMC) to apply to the court to review a S$100,000 fine recently imposed on orthopaedic surgeon Lim Lian Arn “and for the appropriate revisions to be made”.
— Today Online

Feeding the 10 billion
Our current diets are bad for our health and harming the planet. Two billion people are now overweight or obese.
— The Edge Singapore

‘Singapore is not Malaysia’, unfortunately the popular US luxe website for women thinks it’s one and the same
Despite more than 50 years of independence, web sites can still make the mistake of thinking Singapore is part of Malaysia.
— The Independent

Spotlight: Cruising From Singapore
There are several reasons why people go on a luxury cruise: a perfect trip on the ocean, an escape from the busy and hustle of the city life, a break from routine, to discover new cultures through a voyage, reconnecting with oneself, a romantic getaway or for some quality family time.
— Khmer Times

The 25 best things to do in Singapore if you love design
Once ruled by Malaysian royalty, then a subject of British colonial rule for more than a century, the city-state of Singapore has become a center of global finance since it gained its independence in 1965.
— Curbed

More protection for victims abused by intimate partners: Shanmugam
Victims of abuse by their close partners and who face possible violence might soon be able to get an expedited protection order within 24 hours, said Law and Home Affairs Minister K Shanmugam on Thursday (Feb 21).
— Channel NewsAsia (very annoying popups)

Biolidics partners Japan’s Sysmex Corp for cancer-related R&D
Biolidics Limited has established a strategic partnership with Sysmex Corporation, a Tokyo Stock Exchange-listed supplier of hematology instruments, to collaborate on the development of laboratory assays in the field of circulating tumour cells.
— The Edge Singapore

52 WEEKENDS IN SINGAPORE
Singapore is one of the most enthralling start and end points for cruising in Asia, as the city-state is always buzzing with something to see and do.
— Khmer Times

Singapore-registered Paladin Holdings is in the hotseat as questions surface about its legitimacy
Paladin Holdings directors include one German national and an Australian based on Singapore and one Australian based in Australia. The company was awarded more than A$420 million (S$406 million) – about S$16.45 million a month – in contracts by the Australian government to provide security services at their Pacific refugee camps – three camps located on Manus Island in Papua New Guinea.
— The Online Citizen

Telepod, Neuron to be charged for providing PMD-sharing services illegally: LTA
E-scooter sharing operators Telepod and Neuron Mobility are set to be charged in court for providing services at public places without a licence or exemption, the Land Transport Authority (LTA) said in a news release on Thursday (Feb 21).
— Channel NewsAsia (very annoying popups)

Little known Singaporean firm under scrutiny in Australia for procuring S$407 million in security contracts
A little-known Singaporean company, Paladin Holdings Pte has been in the limelight in Australian news recently for being awarded A$420 million (S $407 million) in contracts to provide security services in refugee detention centers in Manus Island, which is part of Papua New Guinea.
— The Independent

CityDev kept at ‘buy’ amid record full-year revenue
Jefferies Singapore is keeping its “buy” recommendation on City Developments with a target price of $12.00, after the property developer beat revenue expectations for FY18.
— The Edge Singapore

Slow take-up rate for insurance scheme tailored for freelance instructors, despite earlier clamour
Freelance coaches have long clamoured for an insurance scheme specifically tailored for them that could ensure their income is not severely affected should they sustain injuries or illnesses.
— Today Online

The Biggest REIT in Singapore and Its Counterpart in Malaysia
Singapore’s and Malaysia’s biggest REITs go head-to-head.
— The Motley Fool

PC maker Lenovo returns to Q3 profit, beating estimates
Lenovo Group Ltd said on Thursday (Feb 21) it swung back to a net profit in the December quarter, beating market expectations, due to a strong performance across its major business groups.
— The Straits Times (annoying popups)

Is the Prime Minister’s job to hold his ministers to account or to be their echo chamber?
After a long silence of over three weeks, Prime Minister Lee Hsien Loong weighed in on the death of actor Aloysius Pang, the latest in a spate of training fatalities,
— The Online Citizen

It’s onward and upward for CapitaLand going into FY19, say analysts
CGS-CIMB Research, DBS Vickers Securities and OCBC Investment Research are maintaining “buy” on CapitaLand with the respective price targets of $3.56, $3.62 and $3.98, after the group posted 71.2% higher earnings of $476 million for the 4Q ended Dec 2018.
— The Edge Singapore