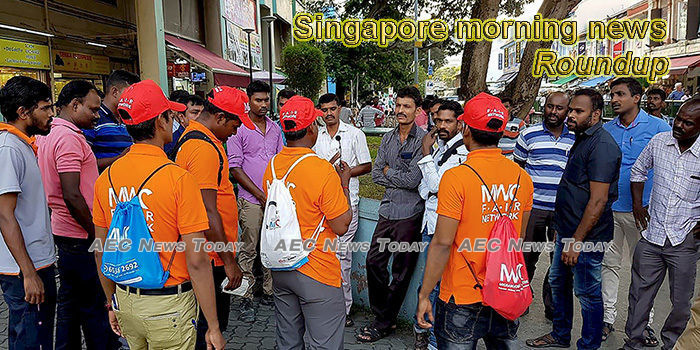 F&N of the future: Singapore ‘smart factory’ and innovation centre to focus on health and sustainability
F&N’s new Singapore-based facility will house both its ‘future-ready’ factory and its product innovation centre, with a focus on expanding its range of health and wellness-focused products in a sustainable manner.
— Food Navigator-Asia

Jump in trampoline-related injuries among children: Study
Failed landings made up the bulk of the injuries, with just over 60 per cent of the accidents resulting from a fall onto the trampoline mat.
— Straits Times (annoying popups)

Minister of Education agrees that MOE policy of withholding PSLE results for unpaid school fees should be reviewed
Education Minister Ong Ye Kung will talk about the PSLE certificate issue in Parliament next year.
— The Online Citizen

18% of investors fear their savings are insufficient for retirement
The study found that non-retired investors in Singapore are taking a decent sum from their salary – 18% – to put into their savings, yet are still expressing fears on their funds in retirement.
— Singapore Business Review

Singapore malls evolve to stay relevant despite online shopping threat
DESPITE the threat from online shopping, it is not all gloom at Singapore’s retail scene with some landlords continuing to invest and upgrade malls.
— The Business Times

Using green data to fight climate change
On the third floor of an industrial building in Loyang, an unlikely tenant resides. Behind closed doors, tufts of baby spinach, arugula and kale grow in neat rows on 28 six-tier racks, under a mixture of red, blue and white LED lights.
— Straits Times (annoying popups)

Singapore investors take note – If it works in India, it will work in Southeast Asia
During the Singapore FinTech Festival which recently concluded, there were calls by Indian venture capitalist Mohandas Pai for Singapore to create a billion-dollar funding arrangement for investments in ‘at least 1,000 start-ups in India’.
— Singapore Business Review

Singapore digital bank aspirants must prove they can make money
Grab Holdings and gaming company Razer will need to demonstrate how their millions of users can help them generate profits if the two technology firms are to win one of Singapore’s coveted digital banking licences.
— Straits Times (annoying popups)

Singapore’s plastic-free home goods brand Bambooloo raises seed funding
The Nurturing Co (TNC), a sustainable products company, has closed an initial angel funding from a small group of investors in Singapore and the US.
— e27

Only time will tell if the POFMA will dumb down sentiment
Not too long ago, opposition parties, the alternative media outlets and political commentators alike had raised concerns in relation to the Protection from Online Falsehoods and Manipulation Act (POFMA).
— The Online Citizen

Jail for ex-Citibank employee for offences that include misappropriating $35,000
Already caught for cheating, a 25-year-old man went rogue while out on police bail last year.
— Straits Times (annoying popups)

Health Check Podcast: How to spot mental health issues if you are aged 16-30
In this fortnightly podcast series on Wednesdays, The Straits Times guides you to healthier living and clears up some common misconceptions on health.
— Straits Times (annoying popups)

Riding the learning curve with the CEO of Supahands
Mark Koh, CEO of Supahands, reflected on his role in growing the company into what it is today with Mike Dias, CEO of ScaleUp Valley.
— e27

Potential digital banks in S’pore must show profits
Grab Holdings and gaming company Razer will need to demonstrate how their millions of users can help them generate profits if the two technology firms are to win one of Singapore’s coveted digital banking licences.
— Straits Times (annoying popups)

S’pore shares rise 0.3% amid mixed markets
Singapore equities outperformed most other regional markets, some of which are showing signs of fatigue after a strong run that began in the lead-up to last Friday’s confirmation of a US-China Phase One trade deal.
— Straits Times (annoying popups)

The low-income women who are baking in change into their lives, together
Since the start of an initiative to enhance the skills of bakers in rental communities, the women involved have found support from one another, extra money during the festive season and new possibilities for the future.
— Channel NewsAsia (very annoying popups)

Ad agency Dentsu to cut 11% of staff in 7 markets
Japanese advertising agency Dentsu will lay off 11 per cent of its employees in seven markets, including Singapore.
— Straits Times (annoying popups)

Man was flying drone without permit when it landed on LRT tracks and was hit by a train
Fortunately, the incident on Feb 8 last year did not cause any damage to the train and services were not disrupted.
— Straits Times (annoying popups)

Tower Transit disciplines bus driver caught on camera running red light in Telok Blangah Road
In a dashcam video, the 97 double-deck bus is seen speeding up and swerving into the right lane without signalling to overtake a taxi in front of it which had stopped for the red light.
— Straits Times (annoying popups)

Donation goal reached for Boys’ Brigade charity drive but more volunteers needed for gift delivery
When Madam Khoong Yoon Chun, 81, received two bags of 3-in-1 Milo packets on Wednesday (Dec 18), it put a smile on her face as she drinks a cup of it every day.
— Straits Times (annoying popups)

ST year-end round-up: 10 of our best interactive graphics for 2019
An immersive guide to the Istana, a data-driven look at the colourful history of Singapore’s street names and an interactive quiz on artificial intelligence were among the interactive graphics produced by ST in 2019.
— Straits Times (annoying popups)

CapitaLand’s Ascott steps up global spread, adding 7,500 units in 2019
CapitaLand’s lodging business unit, The Ascott, has stepped up its global expansion with the opening of 7,500 units in over 40 properties this year, a new record for the company, it announced on Wednesday (Dec 18).
— Straits Times (annoying popups)

Stop sharing videos of fatal SLE crash as ‘it is like killing the man multiple times’, say some observers
The moving trailer runs over and crushes the 45-year-old motorcyclist, leaving a bloody trail across the Seletar Expressway (SLE).
— Straits Times (annoying popups)

Jail for NTU student who claimed stress & ‘addiction’ to bare buttocks caused him to take upskirt videos
Chong Yen Bin had amassed a collection of at least 26 videos.
— Mothership

Sanrio-themed jewellery with Little Twin Stars, Hello Kitty, Cinnamoroll & more now available at Goldheart S’pore
There will be over 30 new creations to choose from.
— Mothership

8 months’ jail for man who abducted woman in 2016
In the guise of a helpful bystander, a man approached a drunk woman and carried her into a taxi.
— Straits Times (annoying popups)

Passenger with S$50 note but short of S$0.40 said he humiliated by SBS bus driver who didn’t give chance
A man in Singapore took to Facebook on Dec. 17 to rant about his experience with a bus driver here who did not allow the passenger to board the bus.
— Mothership

Worker rescued after excavator topples and traps his left leg
A man’s leg was pinned under an excavator at a Housing Board worksite in Tampines on Tuesday (Dec 17) morning.
— Straits Times (annoying popups)