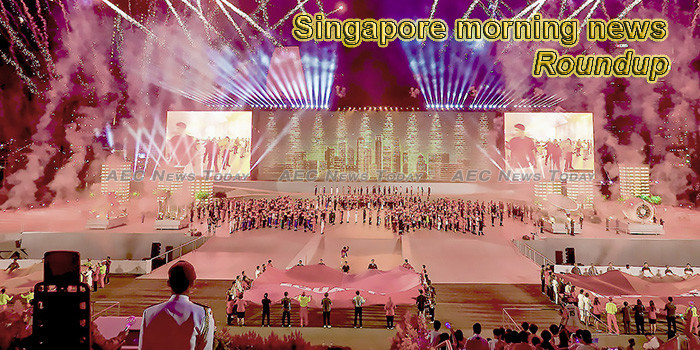 STI plunges 2% amid risk aversion, US-China trade escalation
Singapore stocks opened the week on the back foot on Monday (Aug 5), with the Straits Times Index (STI) plummeting by as much as 2 per cent in morning trade.
— Straits Times (annoying popups)

Singapore tourism receipts in Q1 fell 4.8% amid global economic uncertainty
SPENDING by visitors to Singapore fell 4.8 per cent to S$6.5 billion in the first quarter of 2019 from the same period last year, although international arrivals ticked up by 1 per cent to 4.7 million.
— The Business Times

Proposal to raise cut-off age for law protecting juveniles
August 06, 2019 5:00 AMunder the age of 16 who are exposed to abuse, neglect or risk may be extended to cover those under 18.
— Straits Times (annoying popups)

Honestbee received 38 demands seeking payment of more than $6m; faces 11 legal proceedings
Another day, another demand for payment from a disgruntled creditor – such is life at struggling grocery start-up Honestbee it seems.
— Straits Times (annoying popups)

Free training programme by Google, UOB to help SMEs transform digitally, expand overseas
As many as 400 leaders in SMEs will get to go through a free new training programme from Google and UOB by the end of next year to transform digitally and expand overseas, in a move to help them seize opportunities in the digital economy.
— Straits Times (annoying popups)

OCBC Bank launches Singapore’s first Financial Wellness Index
The study indicates women are more likely to be behind on their investments, among other insights
— Straits Times (annoying popups)

S’pore advertising code of practice to be updated with race guidelines by 2019 after ‘brownface’ hoo-ha
There will soon be a new advertising guideline for marketers to follow when it comes to “potential sensitivities” involving race and ethnicity in Singapore.
— Mothership

SMEs need to contribute more to Singapore economy: Chan Chun Sing
SMALL and medium enterprises (SMEs) in Singapore need to pull their weight in raising their contribution to the Singapore economy, by being much more productive and efficient.
— The Business Times

Singapore, Chinese armies carry out urban raid in joint exercise
Working together as part of a fictional peacekeeping task force, troops from Singapore and China launched an assault on a building in a counter-terrorist urban raid to take out enemy forces yesterday.
— Straits Times (annoying popups)

Hyflux clarifies deadline to sign deal with Utico is Aug 26
Hyflux has clarified that it has until Aug 26, instead of Aug 16, to ink a definitive agreement with United Arab Emirates utility firm Utico.
— Channel NewsAsia (very annoying popups)

Scheme for street performers set to be improved
The National Arts Council (NAC) will work with buskers and venue owners to improve a scheme for the growing community of such performers here, said Senior Parliamentary Secretary for Culture, Community and Youth Baey Yam Keng yesterday.
— Straits Times (annoying popups)

82-year-old driving 22,000km to show Singapore spirit
Retiree See Lew Hang has been exercising regularly, including taking short walks in the mornings. The 82-year-old former businessman wants to be fit for what he described as the National Day trip of a lifetime.
— Straits Times (annoying popups)

S’pore home delivery for duty-free beauty products available 30 days before flight
At The Shilla Duty Free Store in Changi Airport, various beauty brands such as Urban Decay, NARS, YSL, Sulwhasoo, SK-II and more are going for up to 54 per cent off their usual retail prices.
— Mothership

Singapore abstained from voting for global pact on workplace harassment due to ‘concerns about overreach’: Josephine Teo
While Singapore agrees with the intent of a new global treaty against violence and harassment in the workplace, it abstained from voting during a United Nations agency’s annual conference in June due to “concerns about overreach”, said Manpower Minister Josephine Teo on Monday (Aug 5).
— Channel NewsAsia (very annoying popups)

MCCY will not seek to recover S$13 million in waivers of contractual provisions
There was no fraud involved in the waivers given by the National Gallery of Singapore (NGS), the Ministry of Culture, Community and Youth said.
— Mothership

Man found guilty of molesting Scoot stewardess on board flight to Singapore
The stewardess told the plane captain about what happened and asked him to alert the airport police.
— Straits Times (annoying popups)

Tan Cheng Bock calls on Singaporeans to support his party to bring an evolution of change for the betterment of the country
During the official launch of the Progressive Singapore Party (PSP) last Saturday (3 Aug) at Swissotel Merchant Court Hotel, Dr Tan Cheng Bock, founding Secretary-General of PSP, calls for Singaporeans – young and old – to come forward and join him “in making a difference to Singapore”.
— The Online Citizen

Which Singapore Bank Has the Cheapest Shares Right Now?
Oversea-Chinese Banking Corporation Limited (SGX: O39) seems to be the cheapest Singapore bank right now in terms of the price-to-book ratio.
— The Motley Fool

Vallianz to review policy on interested person transactions after SGX query on non-disclosures
Catalist-listed Vallianz Holdings said on Monday (Aug 5) that it would take measures to comprehensively review its interested person transactions (IPT) policy in its response to queries from the Singapore Exchange (SGX).
— Straits Times (annoying popups)

History puts its colourful stamp on Singapore
Britain introduced Singapore’s first postage stamp in 1854 with a royal theme that was to continue for decades.
— Straits Times (annoying popups)

Try Guys performing live at Star Vista in S’pore on Sept. 28, 2019
Touted as YouTube’s most popular adventurous collective, The Try Guys, are in Singapore to perform on Sept. 28, 2019.
— Mothership

Sparking joy and fearing shame: The irony of Singapore’s National Day parade
American writer Mark Twain once wrote, “Dance like no one is watching, sing like no one is listening, love like you’ve never been hurt and live like it’s Heaven on Earth.”
— The Online Citizen

Singapore morning news for May 29