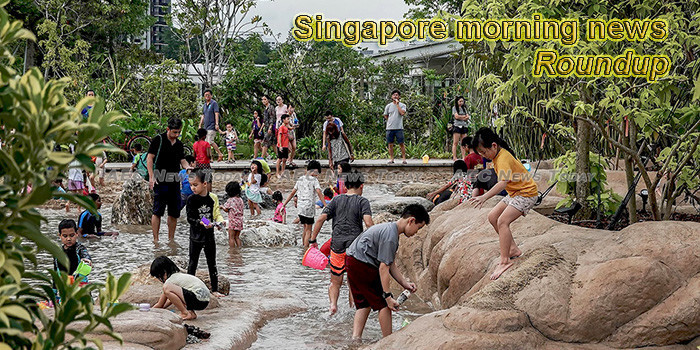 MOM warns of fake employment pass application website
The Ministry of Manpower (MOM) has warned members of the public of yet another fake website that is pretending to be the ministry and duping users into providing their personal information.
— Straits Times (annoying popups)

Better factory data but economists divided on whether Singapore will dodge technical recession
Economists continued to have mixed views about the possibility of a technical recession here, even as the manufacturing sector performed far better than expected last month.
— Straits Times (annoying popups)

Singapore services sector revenue grows at slower 2.8% pace in Q2
Growth in revenue for Singapore’s services sector cooled further in the second quarter of this year, according to data released by the Department of Statistics on Tuesday (Aug 27).
— Straits Times (annoying popups)

Govt to propose changes to Maintenance of Religious Harmony Act in Parliament next week: PM Lee
The Government will propose changes to the Maintenance of Religious Harmony Act next week in an effort to tackle the spread of extremist views and other material that may undermine religious harmony in Singapore, said Prime Minister Lee Hsien Loong.
— The Online Citizen

Technology can displace lawyers, warns Chief Justice as he urges profession to adapt to new reality
Technology is already beginning to displace lawyers from some areas of practice, said Chief Justice Sundaresh Menon on Tuesday (Aug 27) as he urged the legal profession to reskill to adapt to this new reality.
— Channel NewsAsia (very annoying popups)

NTUC Chief Ng: Senior workers told me they welcome opportunity to work longer for active ageing
At the recent National Day Rally on Aug 18, Prime Minister Lee Hsien Loong announced that the retirement age will go up from 62 to 65 and re-employment age from 67 to 70 by 2030.
— The Online Citizen

Singapore inks three pacts with Turkmenistan during state visit of its leader
Turkmenistan may have development experiences and a social make-up that are different from Singapore’s, but there are areas where they can cooperate, said President Halimah Yacob on Tuesday (Aug 27), citing tourism, business and capacity building.
— The Straits Times

RSAF flexes with woman Military Expert 1 engineer to highlight vocation
Adding to the mystifying or demystifying process, another woman personnel serving in the Republic of Singapore Air Force has been thrust into the spotlight.
— Mothership

No win, no pay for certain cases: Law Ministry seeks feedback on proposed conditional fee agreements
The Law Ministry (MinLaw) is seeking public feedback on the proposed Conditional Fee Agreements, an additional payment option where a lawyer is paid only when the claim is successful.
— Straits Times (annoying popups)

Singapore needs to lift farm production, cut waste, as global protein shortage looms:  Study
As a result of climate change and rising population, the world is set to face a 56 per cent shortfall in food nutrition by 2050.
— Today Online

Singapore must be consistent, coherent in policymaking to attract long-term investments: Chan Chun Sing
Singapore must be consistent and coherent in its policymaking if the country is to provide a stable, secure and pro-business environment to attract long-term investments, said Trade and Industry Minister Chan Chun Sing on Tuesday (Aug 27).
— Channel NewsAsia (very annoying popups)

DFS to close its tobacco and liquor stores at Changi Airport
The DFS Group has decided not to retain its duty-free liquor and tobacco concession at Changi Airport when its lease expires in June next year, the company announced on Monday (Aug 26).
— Channel NewsAsia (very annoying popups)

Create flexible workplaces with synergy for all ages
How can workplaces become inclusive and elderly friendly? What will progressive workplaces look like in 2030? Round-table panellists give their views.
— Straits Times (annoying popups)

Man, 34, allegedly steals safe from VivoCity restaurant with about S$17,000 cash inside
A 34-year-old man has been arrested for his alleged involvement in housebreaking and stealing a safe from a restaurant in VivoCity.
— Mothership

Overhaul in food supply chain needed to tackle food waste: Study
The study suggested that surplus food on the shelves could be donated or sold at a discount at food banks, and food that may otherwise end up in the bin could be reintroduced as useful by-products.
— Straits Times (annoying popups)

Ipos sets up new company to help firms commercialise their intellectual property
The company brings together more than 100 experts to help advise businesses in areas such as IP strategy and management, patent search and analysis, as well as IP education and training.
— Straits Times (annoying popups)

Start thinking about reskilling early
A key component of the recommendations by the Tripartite Workgroup on Older Workers includes preparing mature workers for longer careers or a change in jobs.
— Straits Times (annoying popups)

Banana dolphins, watermelon pizza fruit snacks help pre-school kids to eat healthy
By carving a banana into a dolphin in a few simple steps, the fruit can both look fun and be a tasty snack.
— Straits Times (annoying popups)

Elaborate mooncake packaging difficult to recycle and damaging to the environment, experts say
Every Mid-Autumn Festival, many in Singapore buy and gift mooncakes to celebrate the occasion. Most of them come enclosed in fancy boxes, with colourful and lacquered packaging.
— Channel NewsAsia (very annoying popups)

Singapore morning news for May 21