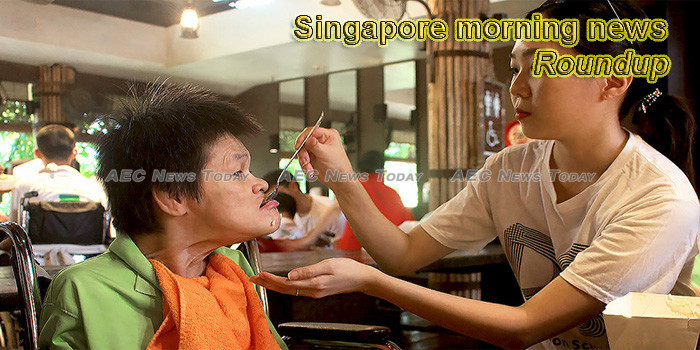 Singapore mulls bonds, reserves for $100 billion climate fight
Singapore is weighing options including the issuance of government bonds to fund the $100 billion it could take to fight rising sea levels over the next century.
— Straits Times (annoying popups)

‘Calamity may come’ if Singapore doesn’t take care of its coastlines now: Masagos Zulkifli
The Minister for Environment and Water Resources also shared more on the citizens’ workgroup, saying one problem it will look at is how to increase the recyclability of neighbourhood blue bins.
— Channel NewsAsia (very annoying popups)

Singapore Leader’s Wife Defends His Seven-Figure Pay on Facebook
Ho Ching, who is married to Singapore’s Prime Minister Lee Hsien Loong, took to Facebook to defend her husband’s pay, which looks higher than those of many government leaders.
— Bloomberg

Uniformed officers are exempted from Retirement and Re-employment Act, but review will be completed in ‘next several months’, says MHA
Following Prime Minister Lee Hsien Loong’s announcement on Sunday (18 August) that by 2030, the country will be raising the retirement and re-employment age to 65 and 70, respectively, the Ministry of Home Affairs told CNA on Tuesday (20 August) that uniformed officers are exempted from this because of the “stringent demands of uniformed jobs”.
— The Online Citizen

NParks moves 152 critically endangered sea turtle eggs from East Coast beach to hatchery
As dawn broke over a stretch of beach along East Coast Park on Wednesday morning (Aug 21), a group of people were huddled over a hole in the ground.
— Straits Times (annoying popups)

Dry spell in Singapore likely to last several months
Across Singapore, the signs of a dry spell are clear: Parched grass, dry ground and low water levels in ponds and reservoirs. A likely reason? A complex climate phenomenon known as the Indian Ocean Dipole (IOD).
— The Straits Times

Singapore has role in BRI’s investment into South-east Asia
THE Second Belt and Road Forum, held in Beijing in late April, marked the launch of BRI 2.0 and delivered a clear commitment to a more open, inclusive, sustainable and market-driven initiative.
— The Business Times

Singapore should aim to be No. 1 in pre-school education
Singapore has a top-notch school system as evidenced by its impressive showings in international education benchmarking tests.
— The Straits Times

More help needed to guide older workers in their careers with raised retirement age
About a quarter of older workers want to work and stay in their current jobs, according to a survey of more than 400 workers released by the Centre for Seniors on Wednesday (Aug 21).
— Straits Times (annoying popups)

OCBC in talks with Singtel about virtual bank licence, say sources
The Monetary Authority of Singapore said in June it plans to issue as many as five new digital bank licences to non-bank firms as part of efforts to strengthen competition in financial services.
— Straits Times (annoying popups)

RateIt raises US$5M to expand its real-time customer feedback solutions in SEA
The current growth and future potential of the SEA market has driven RateIt to move its headquarters from Australia to Singapore Singapore-headquartered startup RateIt, which provides a real-time customer experience management platform for different global brands, has secured US$5 million in Series A financing, led by local VC firm Tin Men Capital.
— e27

Govt help schemes to be more ‘company-centric’: Chan Chun Sing
All that the firms have to do is come up with a business plan, and government agencies will sort out which schemes are relevant to them.
— Straits Times (annoying popups)

Singtel prices US$750m of 10-year notes at 2.375%
SIngtel closed the order book for its US$750 million of 10-year notes after the issue was 3.6 times oversubscribed by investors, and receiving interest of approximately US$2.7 billion, the telecommunications group said on Wednesday (Aug 21).
— Straits Times (annoying popups)

Can Singapore become an Electric Vehicle leader?
WHILE Singapore has staked out a meaningful leadership position in the autonomous vehicle space, it can only be described as a laggard when it comes to electric vehicles.
— The Business Times

UOB, OCBC and DBS lead in study of Asean sustainable banking
AMONG 35 Asean banks assessed, only the three Singapore banks and a Thai financial institution met at least half the criteria in a survey of their performance in environment, social and governance (ESG) integration.
— The Business Times

No plans yet to extend freelancers’ Medisave scheme to private sector
From early next year, freelancers working for the Government will have a portion of their fees automatically channelled towards their Medisave accounts, before they are paid the rest.
— Straits Times (annoying popups)

‘Sugar daddy’ jailed for having sex with 14-year-old girl in disabled toilets
A man who had sex with a 14-year-old in various toilets meant for the disabled was jailed for 22 months on Wednesday (Aug 21).
— Channel NewsAsia (very annoying popups)

S’pore govt should “drop all charges” against M Ravi over statement on M’sian drug mule Nagaenthran’s case: Lawyers For Liberty
The Singapore government must drop all charges against Singaporean international human rights lawyer M Ravi over a statement he made regarding the case of 30-year-old Malaysian drug mule Nagaenthran s/o K Dharmalingam, said Lawyers For Liberty.
— The Online Citizen

Vulcan Capital, owned by late Microsoft co-founder, lands in Singapore with US$100M
Vulcan Capital plans to target Southeast Asian ventures to then use the returns for its philanthropic causes Vulcan Capital, Seattle-based investment company founded by Paul Allen, the late co-founder of Microsoft Corp, has commenced operation of its first international office in Singapore, Bloomberg has learned.
— e27

Del Monte to close 2 US facilities, sell another as it moves to asset-light strategy
Food and beverage firm Del Monte Pacific Limited will close two US production facilities and sell a third in a bid to move to an asset-light strategy, it said in a bourse filing on Tuesday night (Aug 20).
— Straits Times (annoying popups)

Commentary: After the Fed’s rate cut, the impact on Singapore and growth
The fact that the impact might be limited speaks volumes about Singapore’s waning reliance on the US, says NUS Business School’s Sumit Agarwal.
— Channel NewsAsia (very annoying popups)

S’porean killed his dog by hitting it against bathtub, reported to police by his parents
While trying to discipline his newly bought poodle, a Singaporean man hit it so hard that it fell unconscious.
— Mothership

Elderly cyclist killed in hit-and-run accident in Tampines; family appeals for witnesses
Mr Peh Seng Yap was due to celebrate his 82nd birthday on Thursday. A fourth great-grandchild is due in November and his eldest grandson’s wedding has also been planned for the same month.
— Straits Times (annoying popups)

Man given 10 days by court to make first payment for son’s overseas studies or face jail time
A man who was ordered to pay 60 per cent of his polytechnic graduate son’s study abroad as maintenance was taken to court by the son for failing to pay the first payment of $10,172 due in March.
— Straits Times (annoying popups)