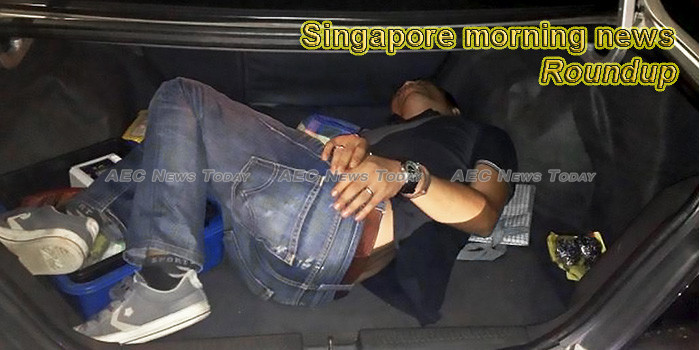 Abuse by couple left maid, 39, disfigured and traumatised
Ms Khanifah, a mother of two from Indramayu, West Java, thinks people are disgusted when they see her. The 39-year-old has a deformed left ear, and permanent and prominent scars on her forehead, back of her head and across her shoulders.
— Straits Times (annoying popups)

STB chief aims to grow, anchor Mice events for the long haul
THE government wants to bring in the world’s top conferences and exhibitions to Singapore, but it’s not just a numbers game.
— The Business Times

Viaduct collapse trial: Cracks found one month before fatal PIE incident
Structural cracks were found on an uncompleted viaduct near Upper Changi Road about a month before it collapsed, killing one worker and injuring 10 others.
— Straits Times (annoying popups)

Two in three S’pore bank customers keen to try digital banks: Survey
Younger customers are leading the charge into digital banks but other age groups are pretty keen as well, according to a new survey.
— Straits Times (annoying popups)

S$12 million fund to help vulnerable persons gain access to sporting programmes
Vulnerable youths, seniors and persons with disabilities (PWDs) may get stronger support as well as access to sporting programmes with the help of a new S$12 million fund by SportCares, the philanthropic arm of Sport Singapore.
— Channel NewsAsia (very annoying popups)

Gaming doing well, but IRs coming into their own as truly integrated resorts
THE recent commitment by Singapore’s two integrated resorts (IRs) – Marina Bay Sands (MBS) and Resorts World Sentosa (RWS) – to expand their footprint is a big plus for the country’s efforts to bring in quality tourism.
— The Business Times

Newcomers up the ante in governance index for trusts
THE third edition of the Governance Index for Trusts (GIFT) assesses the governance and business risk of 46 real estate investment trusts (Reits) and business trusts (BTs) listed on the Singapore Exchange (SGX).
— The Business Times

81 awarded first S’pore Digital Scholarship
Mr Nishok is a passionate film-maker whose goal is to direct his first feature by the age of 35, while Ms Farren Tang is a cyber-security analytics engineer at Singtel who is going back to school to sharpen her computing expertise.
— Straits Times (annoying popups)

Recycling bins to be given to 18,000 HDB residents
Some 18,000 residents in new Housing Board precincts will receive vouchers this month to redeem free recycling bins at Ikea.
— Straits Times (annoying popups)

E-scooter firm faces 56 more charges over illegal service
Local e-scooter sharing start-up Neuron Mobility has been slapped with 56 additional charges over the provision of the devices in public places without a licence or exemption.
— Straits Times (annoying popups)

S&P cuts Singtel’s outlook to ‘negative’
Singtel’s outlook was cut to negative by credit agency Standard & Poor’s – a week before the telco is slated to release its first-quarter results.
— Straits Times (annoying popups)

PAP Women’s Wing position paper debunks PAP MP Darryl David’s view that cost is not a factor when deciding to have children
Just recently, six MPs from the People’s Action Party (PAP) Women’s Wing released a position paper which revealed that 58% of respondents in a survey said that the cost of raising children is a main concern when deciding to have another child.
— The Online Citizen

Investors Turned $100k into $375k by Investing in This Blue-Chip Stock
Investors made a lot of money by investing in DBS Group Holdings Ltd’s (SGX: D05) stock over the past 10 years. Here’s why.
— The Motley Fool

Reits, trusts improve governance, but some lapses draw regulator’s ire
The annual Governance Index for Trusts (GIFT), out Thursday evening, showed that real estate investment trusts (Reits) and business trusts listed in Singapore have continued to improve their combined governance and business risk score since the first edition of GIFT in 2017.
— The Business Times

Students tour nerve centre of power system
A handful of tertiary students had the rare opportunity to tour the inside of the Power System Control Centre of the Energy Market Authority (EMA) yesterday.
— Straits Times (annoying popups)

Kovan Road murders: Ex-cop fails in bid to escape the gallows
A former policeman who was sentenced to death in 2015 for a crime that came to be known as the Kovan double murder has failed in his clemency petition to the President.
— Straits Times (annoying popups)

New research centre to focus on Singapore’s pre-modern history
The Nalanda-Sriwijaya Centre (NSC), set up in 2010 to research pre-modern maritime trade between South Asia and South-east Asia, has shut down – cutting off yet another link to India’s Nalanda University.
— Straits Times (annoying popups)

Online commenters agree with MP Pritam Singh’s call for an overhaul of PA grassroots organisations
On Monday (29 July), Workers’ Party MP Pritam Singh took to his Facebook to mention that the ethos of community service in Singapore through the People’s Association (PA) requires a revamp after the politician highlighted a recent conversation between a grassroots organisation called Simply Eunos and a resident.
— The Online Citizen