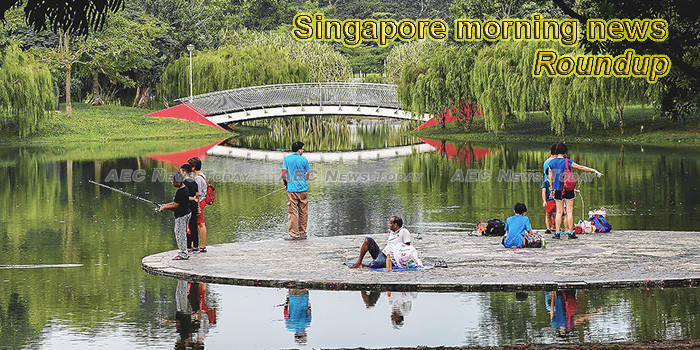 E-concierge platform makes finding a job easier for low-income single parents and the disabled
A stroke two years ago affected the left side of Mr Loo Poh Thye’s body and he underwent two years of rehabilitation.
— Straits Times (annoying popups)

Most Singapore employers keen to hire overseas returnees: Survey
Eight in 10 of employers in Singapore are eager to employ an overseas returnee in the coming year, citing cross-cultural awareness as the top benefit, a survey by recruitment firm Hays found.
— Straits Times (annoying popups)

Can hydrogen be Singapore’s fuel for the future? | Video
Singapore wants to expand the use of hydrogen fuel as a cleaner energy source to reduce emissions and combat climate change, but experts say challenges lie in storing the fuel.
— CNA

More support to help NSFs transit to work or studies after National Service
National servicemen (NSFs) will get more support and resources to help them prepare for employment or further studies when they complete their National Service (NS).
— Channel NewsAsia (very annoying popups)

More support to help NSFs prepare for work and studies after national service
National Servicemen (NSFs) who are about to complete their service are now getting more targeted help in their search for career and educational opportunities.
— Straits Times (annoying popups)

CapitaLand staff to get $500 and 1 day of leave to upgrade digital skills over next 2 years
Real estate developer CapitaLand’s more than 2,600 employees in Singapore will get more help to improve their digital skills over the next two years.
— Straits Times (annoying popups)

Singapore ups the ante in chips industry’s future
SINGAPORE will still be a hotspot for the semiconductor industry, Deputy Prime Minister Heng Swee Keat has said – in spite of a chipmaking decline that saw the economy grind to a halt in the second quarter.
— The Business Times

Second mastermind of ruse that caused WDA to lose $51,000 admits to offences
A second mastermind behind a ruse that cheated theSingapore Workforce Development Agency (WDA)of $51,000 in total, pleaded guilty to his offences on Wednesday (Aug 14).
— Straits Times (annoying popups)

FoodPanda deliveryman gets jail, caning for slashing colleague
A FoodPanda delivery rider who got into a fight with a colleague, slashing him and striking him with a motorcycle helmet, was sentenced to two-and-a-half years’ jail and six strokes of the cane on Wednesday (Aug 14).
— Channel NewsAsia (very annoying popups)

Company fined over incident that injured 3 workers, with 2 of them suffering severe burns
A landscaping firm, linked to a 2016 explosion that left two of its employees with severe burn injuries, was fined $220,000 on Wednesday (Aug 14) for failing to take adequate safety measures.
— Straits Times (annoying popups)

Row of 6 shophouses in Kampong Bahru up for sale with $39.6m guide price
A row of six adjoining conservation shophouses along Kampong Bahru Road has been launched for sale at a guide price of $39.6 million, or about S$6.6 million each, marketing agents JLL and Tuscany Realty said in a press statement on Wednesday (Aug 14).
— Straits Times (annoying popups)

Construction looks to turn corner with slower 4.6% Q2 decline
THE tide may be turning for the ailing construction sector, which has been a persistent drag on growth, a government economist has said.
— The Business Times

Nora Quoirin: A timeline of events
The body of Irish teenager Nora Quoirin was found on Tuesday (Aug 13), 10 days after she went missing from the resort where her family was staying while on holiday in Malaysia.
— CNA

Singaporean couple shares their journey into urban farming
27-year-old Justine Ong-Farmer and her 31-year-old husband Scott Farmer both had well-paying jobs in Singapore.
— The Online Citizen

Recalcitrant offender back behind bars after assaulting sex worker, robbing another woman
A cleaner who assaulted a sex worker and robbed another woman at knifepoint just months after he was released from prison was sentenced to nine years’ preventive detention with 12 strokes of the cane on Wednesday (Aug 14).
— Straits Times (annoying popups)