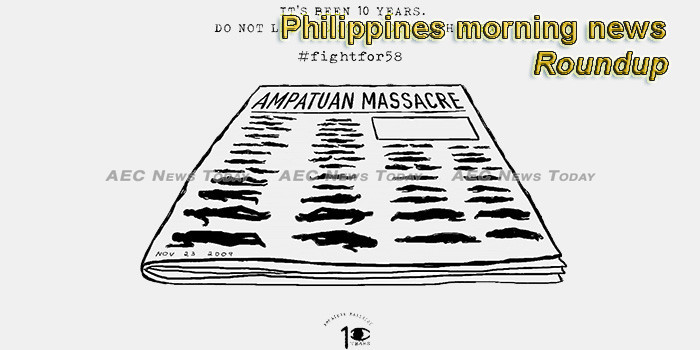 Asean-Russia cooperation ‘ongoing sans fanfare’: Briones
Education Secretary Leonor Briones said engagement between Russia and the Association of Southeast Asian Nations (Asean), particularly the Philippines, has been “ongoing without fanfare” and is growing with the opening of more platforms for cooperation, including education.
— Philippine Canadian Inquirer

Philippines 8th favorite country among travelers
Foreign visitors’ interest in the Philippines remains strong after the country was voted by readers of travel magazine Conde Nast Traveler as one of the favorite destinations in the world to visit.
— The Philippine Star

BPOs seeking ways to maintain NCR footprint
THE Information Technology and Business Process Association of the Philippines (IBPAP) is in talks with Metro Manila mayors to find ways to continue building outsourcing centers in the capital despite a national government suspension of economic zone approvals intended to divert the industry to the countryside.
— BusinessWorld Online

Carpio, ‘defender of rule of law,’ retires
SENIOR Associate Justice Antonio Carpio will remain a staunch defender of judicial independence and rule of law even after his retirement.
— The Manila Times

‘LGU blockade on pork products may cause congestion at ports’
THE Cold Chain Association of the Philippines (CCAP) warned of possible port congestion if local government units (LGUs) continue to block the entry of pork-related products, particularly imported ones, as such may result in more containers parked in ports.
— Business Mirror

PNP to deploy 35k personnel, 100k volunteers for Undas
Around 35,000 personnel from the Philippine National Police will be deployed nationwide to ensure the security and safety of the public for the observance of All Saints’ Day on Friday, its spokesperson said Sunday.
— GMA Network

Congress revives push for better land use
A MEASURE deemed priority by the current administration and business groups that will improve the use of land and resources has been filed anew in Congress.
— BusinessWorld

Vico Sotto to implement winning hacks from PH’s first ever ‘Climathon’
The idea began because a young man was fed up seeing piles of garbage reeking on street corners.
— Rappler

Girl, 12, rescued in Philippines after Sydney man arrested for child abuse
Police have rescued a 12-year-old girl whose abuse was allegedly live-streamed by a Sydney man on social media following a joint investigation between Australian and Philippine authorities.
— South China Morning Post

Philippines plan to shift its capital excites Sabah
A REPORT about Philippines moving its capital from Manila to Mindanao (Southern Philippines) excites the State Government, considering this will make Sabah located in the middle between the capitals of three countries, including Brunei and Indonesia.
— Daily Express

Palace urged to certify as urgent measures seeking higher pension for retirees
House Deputy Minority leader and Bayan Muna Rep. Carlos Isagani Zarate said Sunday the Philippines’ inclusion as among the countries having the worst pension systems for retirees should prod the Duterte government to certify as urgent measures seeking to increase the pension of senior citizens.
— Manila Bulletin

Ex-CAAP official guilty of using agency funds for own gas expenses
A former Civil Aviation Authority of the Philippines (CAAP) official avoided going to trial for graft and admitted guilt to a lesser offense over using public funds for personal gas expenses.
— Rappler

3.0-magnitude quake hits Cotabato
A 3.0-magnitude earthquake struck Cotabato on Sunday, Oct. 27. The Philippine Institute of Volcanology and Seismology said the quake, an aftershock of the 6.3-magnitude quake that hit the province on Oct. 16, hit 15 kilometers southeast of Tulunan at 12:56 p.m.
— Eagle News

Robredo clarifies: I don’t want end to drug war, only a ‘tweak’
Vice President Leni Robredo clarified on Sunday, October 27, that she did not call for an end to the Duterte administration’s relentless anti-illegal drugs campaign, but instead wanted government to assess it and have a little tweak in its implementation.
— Rappler

11 drug suspects fall in separate Quezon City raids
POLICE caught 11 people including a 17-year-old boy and seized P500,000 worth of crystal meth in separate raids in Quezon City at the weekend.
— BusinessWorld

Economists cite state spending anchor of Q3 GDP
FASTER third-quarter gross domestic product (GDP) growth expected to be reported on Nov. 7 will bear the clear imprint of government efforts to catch up with its expenditure plan, state and private sector economists said last week, even as the increase in spending was smaller than a year ago.
— BusinessWorld

Sugar caucus seeks probe into import liberalization
Legislators from sugar-growing provinces will conduct an inquiry next month into the government’s proposals to liberalize sugar imports, a Congressman from Negros said.
— BusinessWorld

‘All eyes are on him’: Robredo expects Peralta to protect integrity of Supreme Court
Vice President Leni Robredo expressed confidence that newly appointed Supreme Court Chief Justice Diosdado Peralta will protect the integrity of the High Court, especially in the electoral protest filed against her by former senator Ferdinand Bongbong Marcos Jr.
— Rappler

DOLE expands gov’t internship program
The Department of Labor and Employment (DOLE) is expanding its Government Internship Program (GIP) to cover individuals over 30 years old, along with victims of armed conflict, rebel returnees, persons with disabilities, and indigenous people.
— Rappler

Solon wants DSWD to exclusively issue PWD ID to stop fraudsters
A lawmaker who called for an inquiry into irregularities in the issuance of person with disability ID wants the Department of Social Welfare and Development to solely handle the application process, amid alleged fraudulent claims and redtape.
— GMA Network

KWF wants indigenous languages used in school papers
The Komisyon sa Wikang Filipino (KWF) is calling on the Department of Education (DepEd) and the National Schools Press Conference (NSPC) to encourage the use of indigenous languages in campus papers across the country as the world celebrates the Year of Indigenous Languages this year.
— Rappler

PDEA: War on drugs solution with high people’s satisfaction, not a flop
Philippine Drug Enforcement Agency chief Aaron Aquino on Sunday defended the war on drugs from Vice President Leni Robredo’s remark that it has already failed and should be stopped.
— GMA Network

No security threat monitored for Undas, so far –PNP’s Banac
The Philippine National Police has not received any reports on security threat, so far, as Filipinos prepare for the observance of the All Saints Day and All Souls Day tradition (Undas).
— GMA Network

GAD Budget Forum slated in La Union
The Regional Gender and Development Committee (RGADC) and the Philippine Commission on Women (PCW), in partnership with the provincial government of La Union, will conduct a provincial GAD Budget Forum on November 5 to 6 at Hotel Ariana in Bauang town.
— Philippine Information Agency

Travelers to Korea can now depart from Clark airport
Travelers flying to and from Korea can add the Clark International Airport in Pampanga as another transit point option, the Department of Transportation announced on Sunday, October 27.
— Rappler