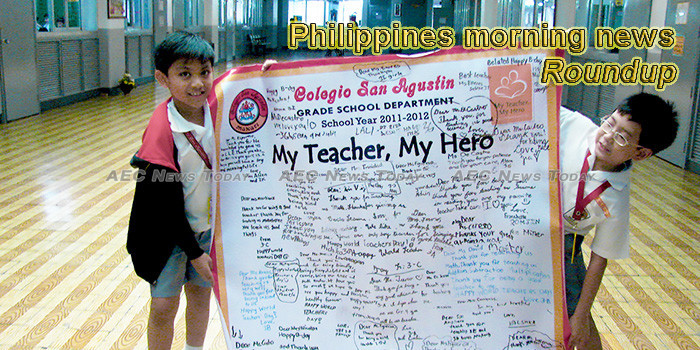 Manila faces climate threat
Manila and five other areas have been identified as facing the most severe consequences of climate change, a Time magazine report showed.
— Manila Standard

Sept. factory growth slowest in 3 months
BUSINESS CONDITIONS for manufacturers in the country improved by the slowest clip in three months in September, as a cautious outlook as well as slower employment and purchasing growth capped the lift from “a solid rise” in new orders, according to the latest Philippine survey conducted by IHS Markit, which released results on Tuesday.
— BusinessWorld

ASEAN manufacturing purchasing managers’ index, September (2019)
BUSINESS CONDITIONS for manufacturers in the country improved by the slowest clip in three months in September, as a cautious outlook as well as slower employment and purchasing growth capped the lift from “a solid rise” in new orders, according to the latest Philippine survey conducted by IHS Markit, which released results on Tuesday.
— BusinessWorld

Duterte downplays US travel ban threat vs. Filipino execs in De Lima detention
President Rodrigo Duterte on Tuesday downplayed the threat of some American lawmakers to ban the entry to the United States of Philippine government officials allegedly involved in the imprisonment of opposition Senator Leila De Lima.
— GMA Network

3 bills to save rainwater saved from last Congress
WHEN the rains started falling last June, everyone welcomed them, especially the residents of eastern Metro Manila who had been through several waterless weeks after the level at Angat Dam fell below normal and the Metropolitan Waterworks and Sewerage System (MWSS) reduced the supply to Manila Water.
— Tempo

GDP expansion seen to pick up, but S&P trims projections
THE ECONOMY stands a chance of still hitting the lower end of the government’s 6-7% growth forecast for this year, according to separate analyses by S&P Global Ratings as well as First Metro Investment Corp. (FMIC) and the University of Asia and the Pacific (UA&P) that bared expectations of “acceleration” this semester from the first half’s disappointing 5.5% clip.
— BusinessWorld

Bottleneck
THE “ber” months, Jose Mari Chan’s voice, and the countdowns on TVs and radios are all reminders that the Christmas season is just around the corner. It is also a reminder that our traffic nightmare is about to get worse.
— Tempo

Duterte to wait for results of Senate probe before taking action on claims vs Albayalde, 13 “ninja cops”
President Rodrigo Duterte will defer taking any action following the allegations against Philippine National Police Chief Oscar Albayalde and 13 policemen who were ordered dismissed but were later only demoted for engaging in the recycling of illegal drugs.
— Eagle News

After signing anti-hazing law, Duterte now says hazing can’t be eliminated
Over a year after he signed the Anti-Hazing Act of 2018 , President Rodrigo Duterte said it is impossible to stop hazing.
— Rappler

Duterte holds his tongue on proposed U.S. travel ban vs officials in De Lima detention
In a rare show of restraint, Philippine President Rodrigo Duterte held his tongue on the proposal of American senators to ban from the United States Filipino officials involved in the imprisonment of Senator Leila de Lima.
— Rappler

European Union hails Naga City as newest ‘Justice Zone’
The European Union (EU), which is committed to supporting the reforms being pursued by the justice sector in the Philippines, has welcomed the establishment of this city as a “Justice Zone” by the Justice Sector Coordinating Council (JSCC).
— Philippine News Agency

BIR lifts closure order on online gambling firm
The Bureau of Internal Revenue (BIR) lifted its closure order against Great Empire Gaming and Amusement Corporation (GEGAC) just days after being shut down for being unable to pay the right taxes.
— Rappler

More infrastructure projects close in on final approval by NEDA
THE NATIONAL Economic and Development Authority (NEDA) Investment Coordination Committee-Cabinet Committee (ICC) has approved more projects, involving infrastructure as well as social and governance reforms that are a centerpiece of the current government’s development efforts.
— BusinessWorld

DOH: Central Luzon remains Polio-free
TARLAC: The Department of Health (DoH) announced the Central Luzon region remains polio-free despite the emergence of the virus in certain areas. “There are no confirmed cases of polio as …
— Manila Times

From burger flipper to franchiser
BILLIE JEAN KING once said, “Champions keep playing until they get it right.” In sports and in business, those who work hard and persevere are rewarded.
— BusinessWorld

Ex-PMA cadet speaks out: Nothing justifies violence
Nothing justifies the act of violence, a former Philippine Military Academy (PMA) cadet on Tuesday said as he denounced hazing during a forum in Manila.
— GMA Network

Congresswomen push bill vs child marriage: ‘We owe it to young girls’
Several congresswomen committed to back the bill seeking to ban child marriages in the country, but emphasized the fight should take a multi-sectoral approach.
— Rappler

Albayalde fires back at Magalong: You could have eliminated ‘ninja cops’ yourself
A visibly angry Philippine National Police (PNP) chief General Oscar Albayalde fired back at Baguio City Mayor Benjamin Magalong after the retired cop accused him of intervening in the dismissal of 13 ninja cops in Pampanga 6 years ago.
— Rappler

Gov’t doctors, nurses in Angeles City not observing work hours dared to resign
The new mayor here dared on Monday, September 30, all doctors and nurses employed by the city government to resign if they did not follow the eight-hour per day work hours.
— Rappler

Forever 21 stays open in Philippines, says SM Retail
Philippine operations of fast fashion giant Forever 21 will not be affected by the bankruptcy filing of its parent company in the United States, according to SM Retail.
— Rappler

P1.6-B Isabela road to open soon
SANTIAGO CITY, Isabela: With the opening of the more than P1.6-billion Ilagan-Divilacan Road, the coastal towns of Isabela will no longer be considered isolated from the rest of Luzon, according …
— Manila Times

Albayalde got SUV after questioned drug op in 2013, says Magalong; PNP chief denies
PNP chief Oscar Albayalde was reported to have been one of the Pampanga police officials who acquired a sport utility vehicle shortly after a questionable anti-drug operation in the province in November 2013.
— GMA Network

Indonesia Morning News For May 30