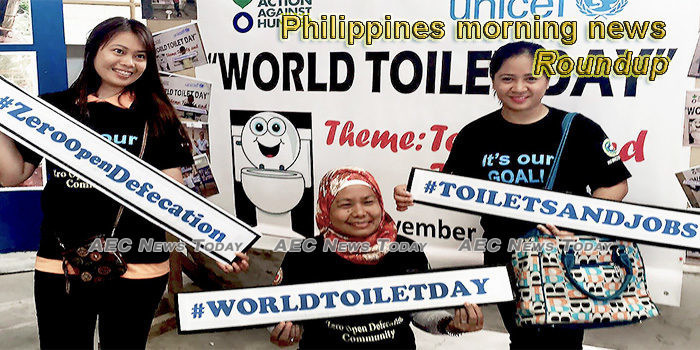 IMF keeps 2019 GDP forecast
The International Monetary Fund (IMF) has kept its economic growth forecast for the Philippines at 5.7 percent this year and revised upward the 2020 outlook to 6.3 percent — from 6.2 percent previously — on the back of better government spending and easing of monetary policy.
— Manila Times

Effects of rice tariffication hindered by abusive traders: CabSec
Unscrupulous traders may be one of the reasons why farmers cannot feel the full effects of the Rice Tariffication Law, a Palace official said on Monday.
— Philippine News Agency

House approves bill extending validity of 2019 budget
The House of Representatives gave the green light to the bill that would extend the shelf life of the current P3.757-trillion budget for 2019 until December 31, 2020.
— Rappler

Typhoon Ramon shifts toward Babuyan Group of Islands
What’s the weather like in your area? Tweet us at @rapplerdotcom .
— Rappler

This gov’t will be known for ‘Build, Build, Build’
IT is now three years and six months since the start of the Duterte administration. It im­mediately launched new programs led by a drive on illegal drugs along with regional eco­nomic development programs, with emphasis on the President’s home region of Mindanao, along with his all-out push for a Bangsamoro Autonomous Region.
— Tempo

Congestion crushing the life out of the country
ACCORDING to the news over the weekend, Malacañang is “studying” the latest genius non-solution to “solve” the traffic crisis, the implementation of a voluntary four-day workweek for the balance of the holiday season for non-critical government personnel and the private sector.
— Manila Times

Air Force joins drive vs. NPA’s campus recruitment
The Philippine Air Force (PAF) in Eastern Visayas is reaching out to campuses in a bid to shield students from recruitment activities of the New People’s Army (NPA).
— Philippine News Agency

Gasoline prices up, diesel down on November 19
Oil companies will be adjusting prices effective on Tuesday, November 19, as market forces place upward pressure on gasoline .
— Rappler

Lanao del Sur, Marawi voters ask Comelec to hold special elections
Vilma*, 49, is sure she remembers it clearly: it was around noon of election day on Monday, May 13, when men stood by the gates of a precinct in Bayang, Lanao del Sur, handing voters money for them to shade specific names on the ballot.
— Rappler

PSEi down on profit taking
Investors sold off their positions on Monday as they await the next move of the United States and China regarding their trade negotiations.
— Manila Times

Bayan Muna solon afraid of evidence on links to communist group –AFP spox
The Armed Forces of the Philippines (AFP) on Monday said it was not surpised that Bayan Muna party-list Representative Carlos Zarate declined their offer to dialogue on the recent raids of the offices of militant groups.
— GMA Network

Palace thanks Filipinos for ‘excellent’ net optimism score
Although fewer Filipinos expect their lives to improve in the next 12 months, Malacañang is still grateful that the net personal optimism score classified by an independent pollster remained “excellent”.
— Philippine News Agency

Rocco Nacino on returning to MMFF: I’m enjoying the moment
Rocco Nacino makes a return to the Metro Manila Film Festival (MMFF) this year with TBA Studios’ Write About Love, and this time, he’s more relaxed about being part of the film festival.
— Rappler

Subscribing to IPOs can now be done via smartphones
The Philippine Stock Exchange (PSE) launched a mobile application for its initial public offering (IPO) subscription platform, making it easier for regular investors to get into maiden offerings.
— Rappler

LOOK: PNP just got new helicopter and drone fleets
In a boost to its surveillance, firepower, and mobility, the Philippine National Police (PNP) obtained 5 helicopters, a fleet of drones, land vehicles, and a stockpile of firearms worth P3 billion.
— Rappler

PH to access ADB loan for El Nido, Coron rehab: DOT
The Philippine government is tapping financial assistance from the Asian Development Bank (ADB) to fund its rehabilitation efforts in El Nido and Coron in Palawan, a ranking official of the Department of Tourism (DOT) said Monday.
— Philippine News Agency

Duterte to continue riding motorcycles despite painful fall, illnesses
President Rodrigo Duterte said he would still ride motorcycles even after an accident in October caused him enough pain to cut short his official trip to Japan.
— GMA Network

It will be a problem if Cayetano doesn’t honor term deal, Duterte says
The administration will have a problem in its hands if Speaker Alan Peter Cayetano decides to turn his back on the term-sharing agreement that President Rodrigo Duterte brokered between him and Marinduque Representative Lord Allan Velasco before the 18th Congress convened earlier this year.
— GMA Network

Baguio hosts 66th Mine Safety & Environment confab
The city will once again host the annual Mine Safety and Environment Conference from November 19 to 22 to be attended by more than a thousand mining stakeholders and other related industry players.
— Philippine Information Agency

Drilon questions P50-million ‘kaldero’ for 2019 SEA Games
Senate Minority Leader Franklin Drilon questioned why the government prioritized spending P50 million on an oversized kaldero (cauldron) that would be used for the torch lighting ceremony during the 2019 Southeast Asian Games .
— Rappler

Philippines Morning News For May 17