Philippines morning news for May 3 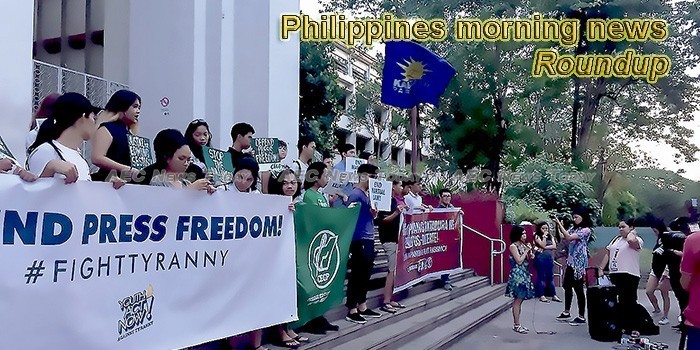 April Philippine factory reading lowest in 9 months
Growth in Philippine manufacturing eased in April amid a slight improvement to the country’s business conditions, according to monthly tracking done by IHS Markit for Nikkei Inc.
— The Philippine Star

UP enters top 100 universities in THE Asia rankings
The University of the Philippines is among the top 100 in unversities in Asia after placing 95th in the 2019 Times Higher Education Asia University Rankings.
— The Philippine Star

Dispute breaks out over RCEF funding as DA insists on P10B
THE Department of Agriculture (DA) has signaled that it will claim the full amount of P10 billion once tariffs start generating funding for the Rice Competitiveness Enhancement Fund (RCEF), arguing that a P5 billion advance provided in 2018 was meant for other rice projects.
— BusinessWorld Online

ADB to finance $100-M walkways in Metro Manila
All over Metro Manila, there’s little or no room for expanding or constructing sidewalks.
— The Philippine Star

Where P2.8-B cocaine ended up in PH over past decade
Cocaine just keeps on floating near Philippine shores.
— Rappler

Philippines, Indonesia kick off coordinated border naval patrol
The Philippines and Indonesia kicked off on Thursday their joint patrol in the Sulu-Celebes Seas, a move aimed at strengthening security cooperation to combat piracy, smuggling and maritime attacks in the region.
— Xinhua

$500M pioneering project to curb imports
The country’s lone reinforcing bar (rebar) manufacturer will increase the value-added on steel scraps by more than 30 percent through its $500-million (P26 billion) steel beams manufacturing plant, the first in the country.
— Malaya

The Philippines: Renewed allegations against UN expert are “clearly retaliation”
The Deputy Chief of Staff for Civil-Military Operations, Brigadier General Antonio Parlade, told a news conference in Manila on 13 March that the United Nations had been infiltrated by the Communist Party of the Philippines through Ms. Tauli-Corpuz.
— AEC News Today/ PR Newswire

Sanofi wins US approval to sell dengue vaccine but with major restrictions
The US Food and Drug Administration on Wednesday gave Sanofi SA’s dengue vaccine Dengvaxia a very narrow approval as the company continues to suffer from evidence that its vaccine, which took 20 years to develop, can cause severe infections in some people.
— ABS-CBN News

Water disruption persists, Laguna Lake cleanup pushed
Maynilad Water Services Inc. said it increased the production of its Putatan water treatment facilities 1 and 2 from 80 million liters per day (MLD) to 125 MLD as of 2 a.m. yesterday, May 2 but noted supply disruption in its service area may still continue.
— Malaya

Economists expect negative to flat first-quarter agriculture performance
ECONOMISTS expect production of agriculture — which contributes a tenth to gross domestic product (GDP) and a fourth of jobs in the country — to have contracted or registered flattish increment at best last quarter in the face of an El Niño-induced dry spell, according to separate interviews earlier this week.
— BusinessWorld Online

No pre-shaded ballots for May 13 polls: Comelec
An official of the Commission on Elections (Comelec) on Thursday said there is no truth to allegations that official ballots for the May 13 mid-term elections have been pre-shaded.
— Philippine News Agency

Taguig mothers join fight for an HPV-free future
Mothers play an important role in shaping their daughters’ lives—and this includes helping ensure her future health by protecting them at an early age from potentially fatal illnesses such as cervical cancer, which is the second leading cause of cancer-related deaths among Filipinas.
— Manilastandard.net

Philippine Church groups set candidate electing guidelines
Church groups in the Philippines have come up with a set of guidelines to help Filipinos choose their candidates in upcoming national elections.
— UCA News

Rappler’s Maria Ressa pleads not guilty in anti-dummy case
Rappler CEO and executive editor Maria Ressa has pleaded not guilty to a charge of a violation of the Anti-Dummy Law.
— GMA News

Iloilo City warns public to stay indoors due to extreme heat
The public is encouraged to stay indoors as much as possible and to stay away from the direct heat of the sun this summer, which is aggravated by the El Niño phenomenon.
— Philippine News Agency

Ilocos Region, 4th lowest in poverty incidence in PH
The National Economic and Development Authority (NEDA) in the Ilocos bared that Region 1 is 4th lowest in poverty incidence in the country for the 1st Quarter of 2018 during the briefing conducted by the Philippine Statistics Authority (PSA) held on April 25 at the SR Paradise Hotel here.
— Philippine Information Agency

Vigan pushes yearly pet vaccination for rabies-free barangays
The city government of Vigan is keen on maintaining its record as a rabies-free city.
— Philippine Information Agency

Fish Kill Occurred In Camarines Sur
Another fish kill occurrence was reported in Pili, Camarines Sur, where thousands of fish were found dead along the coastline.
— Philippine News

Albay farmers advance mechanization through DAR’s P12.6-M aid
Farmers in Albay are now advancing toward modern rice farming through the grant of PHP12.6-million worth of farm equipment by the regional office for Bicol here of the Department of Agrarian Reform (DAR).
— Philippine News Agency

Why Filipino nurses are a huge presence in U.S. health care
A vast majority of Filipinos are seen to dominate the field of nursing in the United States, with registered nurses (RNs) making up the largest segment of the country’s health care workforce.
—  Inquirer.net

756 Mindoro farmers get land titles, livelihood support from DAR
Around 756 agrarian reform beneficiaries are now certified land owners after they finally received their Certificates of Land Ownership Awards (CLOAs) from the Department of Agrarian Reform (DAR) in fitting rites at the Bulwagang Panlalawigan of the Capitol Compound here.
— Philippine News Agency

Cebu Pacific labor union: No issue with management
THE workers’ union of embattled Cebu Pacific denied claims that the recent wave of flight cancellations were due to labor woes.
— The Manila Times

Other ‘Bikoy’ video sharers can be investigated too – DOJ
People who shared the controversial Bikoy videos which accused the Duterte family of being involved in illegal drugs may be investigated by the government, the Department of Justice (DOJ) said on Thursday, May 2.
— Rappler

NYC head backs return of ROTC
The National Youth Commission (NYC) is supportive of the move to bring back the Reserve Officers’ Training Corps (ROTC) to prepare the youth to respond to emergencies and in securing the country.
— Philippine Information Agency

DoH launches suicide prevention hotline
The Department of Health (DoH) has set up a hotline for those who are suffering from mental health problems, including those contemplating suicide.
— The Manila Times

Opposition bets urge probe into Bikoy’s allegations vs. Duterte kin, associates
The government should look into the drug allegations against members of the Duterte administration instead of merely arresting the person who allegedly uploaded the series of anonymous videos of Bikoy, opposition senatorial candidates said Thursday.
— GMA News

Panelo says plotters’ matrix came from ‘unknown number’, not from Duterte
Presidential spokesperson Salvador Panelo admitted on Thursday that he got the copy of the matrix naming the personalities involved in an alleged plot to oust President Rodrigo Duterte from an unknown source.
— GMA News