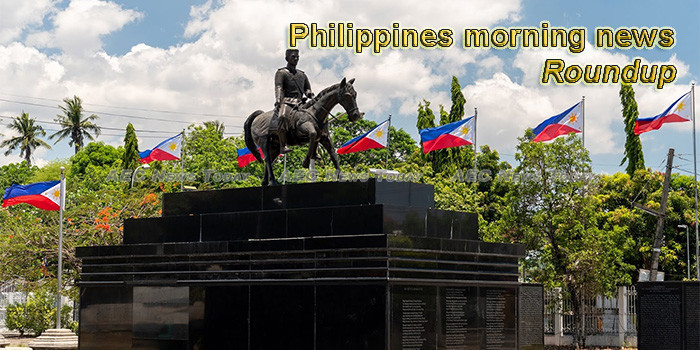 Government debt payments in Q1 rise 11% to P220.2 billion
DEBT payments made by the national government as of the first quarter of 2019 amounted to P220.179 billion, increasing by 11.09 percent from the P198.2 billion recorded in the same period for 2018, with amortization outpacing interest payments for the period.
— Business Mirror

Duterte regrets move to run for president, cautions Inday Sara
President Duterte on Wednesday said he regretted running for president due to the insurmountable problems he had to face, and warned his daughter, Davao City Mayor Sara Duterte-Carpio not to follow in his footsteps.
— Inquirer.net

BOC to collect 35% MDM tariff difference
IMPORTERS of mechanically deboned meat (MDM) of chicken whose shipments were assessed a lower tariff of 5 percent even after the effectivity of the rice trade liberalization law in March will have to pay the government more.
— Business Mirror

DBM releases P54-billion pension funds of AFP, uniformed personnel
THE Department of Budget and Management (DBM) has released the pension requirements of military and uniformed personnel (MUP) amounting to around P54.231 billion, in line with Congress Joint Resolution (JR) 1, Series of 2018.
— Business Mirror

Reforms eyed to boost FDI inflows
FOREIGN direct investments (FDI) inflows to the Philippines dropped in 2018 even as most Southeast Asian countries saw gains that pushed the region’s overall haul for the year to an all-time high.
— BusinessWorld Online

China, US welcome to help PH
Supreme Court Chief Justice Lucas Bersamin, who led the flag-raising ceremony Wednesday at the Bonifacio Monument in Caloocan City, gave his own definition of independence: “It’s simple: No one else can solve our challenges and problems but us.
— Inquirer.net

COA flags OVP project for deficiencies
The Commission on Audit (COA) has flagged some P28.189 million in the Angat Buhay project of the Office of the Vice President (OVP) for deficiencies, including lack of official receipts, liquidation reports and progress reports.
— The Inquirer

Ex-DOH chief Garin calls for an end to ‘fraud virus’ in PhilHealth
Former Health secretary and Iloilo 1st District Representative-elect Janette Garin pointed out that non-implementation of radical reforms aimed at system improvement, lack of safeguards in policies, and in-fighting are among the issues that are hounding the Philippine Health Insurance Corporation (PhilHealth).
— GMA News

Duterte: Gov’t working on salary hike for teachers but there are millions of them
President Rodrigo Duterte on Wednesday assured public school teachers that his government would raise their salaries even as he took note of their number.
— GMA News

Chinese, Koreans continue to dominate Boracay arrivals
China and South Korea continued to be the largest sources of visitors to Boracay Island for the first 5 months of 2019.
— Rappler

Duterte laments entry of rich people in party-list system
President Rodrigo Duterte on Wednesday lamented the use of the party-list system by millionaires to gain seats in the House of Representatives, undermining the original goal of providing representation to marginalized sectors.
— GMA News

DFA says Chinese vessel’s abandonment of Pinoy crew ‘condemnable’
Foreign Affairs Secretary Teodoro Locsin Jr. on Wednesday said that he found the abandonment of the Filipino fishermen whose boat sank after being hit by a Chinese fishing vessel in Recto Bank contemptible and condemnable.
— GMA News

PHL defense chief condemns “cowardly actions” of Chinese vessel which hit PHL boat near Recto Bank
The Philippine Department of National Defense (DND) “denounced the actions of a Chinese fishing vessel” which hit a Philippine vessel that had 22 Filipino crewmen, abandoning them after the incident.
— Eagle News

Gov’t to run after corrupt health providers, PhilHealth officials – Duque
After a dialysis center was found to have charged the Philippine Health Insurance Corporation (PhilHealth) for “ghost” kidney treatments, Health Secretary Francisco Duque III warned the government would run after all medical treatment facilities and officials found to have committed fraud.
— Rappler

Independence Day greetings extended to Duterte by UAE leaders
Leaders from the United Arab Emirates sent congratulatory greetings to President Rodrigo Duterte on the country’s celebration of its 121st Independence Day on Wednesday, according to the Emirates News Agency.
— GMA News

Comelec reminds candidates, parties of Soce deadline
Candidates and political parties who ran in the May 13 midterm elections have until today, Thursday, June 13, to file their statements of contributions and expenditures (Soces) “before the appropriate Commission on Elections (Comelec) office,” Comelec spokesperson James Jimenez said.
— Philippine Daily Inquirer

SEC targets to release ICO rules later this year
THE Securities and Exchange Commission (SEC) is optimistic it can come out with the guidelines for initial coin offerings (ICO) this year as it hopes to regulate the number of businesses using this method to raise money.
— BusinessWorld Online

More privileges and rights to PWDs
On May 27, 2019, House Bill (HB) 9106 (HB 9106) entitled “An Act Granting Additional Privileges to Persons with Disabilities,” was approved on third reading by members of the House of Representatives of the 17th Congress, and transmitted to the Senate on May 28, 2019.
— The Manila Times

Atienza calls for change of poll watchdogs, calls PPCRV a ‘lapdog’
Buhay Party-list Representative Lito Atienza on Wednesday called for a change in election watchdogs as he accused the Parish Pastoral Council for Responsible Voting (PPCRV) of being a lapdog.
— GMA News

Duterte to Bangsamoro: Exploit your territory of riches
President Rodrigo Duterte on Wednesday urged the Moro people to expedite the exploitation of natural resources in the Bangsamoro region including potentially oil-rich Liguasan Marsh.
— GMA News

Duterte urges Moros to take advantage of BARMM
President Rodrigo Duterte on Wednesday urged Moros to exploit their resources and take advantage of the transition from the Autonomous Region in Muslim Mindanao (ARMM) to the new Bangsamoro Autonomous Region in Muslim Mindanao (BARMM) as mandated by the ratified Bangsamoro Organic Law (BOL).
— Philippine News Agency

Local rice, corn stocks higher in May – PSA
THE country had more stock of rice and corn as of May 1, the Philippine Statistics Authority (PSA) reported on Wednesday.
— The Manila Times

New markets eyed for PH exports
The Philippine Chamber of Commerce and Industry (PCCI) is still upbeat for the export industry this year despite the slowdown in performance due to weak global demand as new markets are being eyed by both exporters and the government.
— The Manila Times