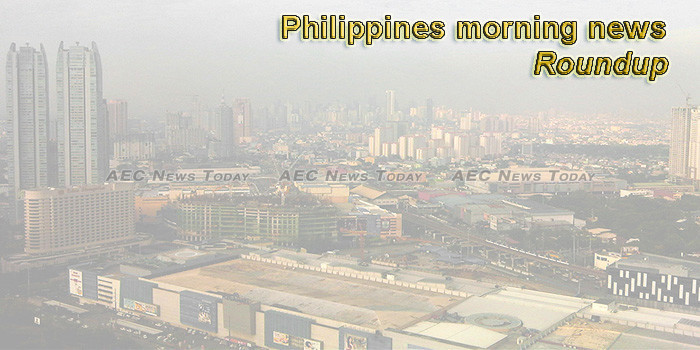 Philippines’ Duterte defends China gambit, calls for return of death penalty in annual address
Philippine President Rodrigo Duterte launched a spirited defence of his relationship with China on Monday (Jul 22), insisting that his refusal to challenge its maritime assertiveness was not capitulation, but an avoidance of conflict.
— CNA

Goverment incurred P41.8-b budget deficit in June
The government incurred a budget deficit of P41.8 billion in June, lower by 22.9 percent or P12.5 billion than the P54.3-billion shortfall in the same month last year as revenue collections rose 4.3 percent and expenditures dropped 1 percent during the month, the Treasury said Monday.
— Manilastandard.net

‘I will end my term fighting’
Although still basking in popularity halfway through his six-year tenure, President Duterte vowed yesterday to end his term fighting as the country’s woes – especially the drug menace – continue.
— The Philippine Star

Philippines Has Little Power Against China, Duterte Tells Lawmakers
President Rodrigo Duterte of the Philippines used his annual address to Congress on Monday to defend his government’s conciliatory stance toward China and his controversial drug war, which has left more than 6,600 people dead.
— The New York Times

Government vows to accelerate infrastructure spending over the next three years
Finance Secretary Carlos Dominguez III said Monday the acceleration of infrastructure projects under the “Build, Build, Build” program is a major priority in the second half of the Duterte administration.
— Manilastandard.net

Davao City militants seek ouster of President
Here in President Duterte Rodrigo ’s hometown, militant groups are calling for his ouster and an end to martial law in Mindanao because of his failure to deliver on his promise of change during his first three years in office.
— Philippine Daily Inquirer

Duterte sets conditions for his imprisonment, vows to end term ‘fighting’
President Duterte is ready to be sent to prison over alleged extrajudicial killings if he is given a “comfortable cell” and “unlimited” conjugal visits.
— Manila Bulletin

Duterte leaves federalism to next President
President Rodrigo Duterte on Monday conceded that the shift to a federal form of government is up for another President to complete.
— Inquirer.net

PH rethinks China-backed loans due to high rates
The Philippines is carefully studying if it will avail itself of more loans from the Beijing-based Asian Infrastructure Investment Bank (AIIB) given the lender’s relatively higher rates.
— inquirer.net

Duterte vows to keep China fishers out of West PHL Sea ‘in due time’
The Duterte Administration would stop China from fishing within the Philippines’ exclusive economic zone “in due time”, President Rodrigo Duterte promised on Monday, during his fourth State of the Nation Address.
— GMA News

Teachers in Davao Norte get threat of ‘tribal war’
The mayor in the Davao del Norte town of Talaingod said he requested the Department of Education (DepEd) to temporarily halt the deployment of teachers in the town after receiving a “pangayaw” or tribal war threat.
— Philippine News Agency

DPWH to construct P66M worth of school projects in Pangasinan town
The Pangasinan 3rd District Engineering Office of the Department of Public Works and Highways (DPWH) in Ilocos Region has started the construction of P60 million-worth of two school buildings in Asingan town.
— Philippine Information Agency

5 state agencies told: Improve services or die
PRESIDENT Rodrigo Duterte on Monday ordered five government agencies to improve their services, and threatened to terminate them if they fail to do so.
— The Manila Times

Gov’t seeks to limit power plant outages as part of performance benchmark
THE ENERGY REGULATORY COMMISSION (ERC) has asked the public to submit comments on its proposed interim benchmark for reliability of power generation units in the country, especially in terms of allowable outage days per year.
— BusinessWorld Online

Duterte must ‘iron out’ second tranche of tax reform for investors: analyst
President Rodrigo Duterte should “iron out” a measure that aims to lower corporate income taxes and rationalize incentives as the market expects updates on tax reform, an analyst said Monday.
— ABS-CBN News (video)

Duterte: I’m willing to be jailed for EJKs if there’s ‘unlimited’ conjugal visits
President Rodrigo Duterte would not mind being incarcerated over the alleged extrajudicial killings in the Philippines due to his administration’s brutal drug war. But he has some conditions: there must be a “comfortable cell” and “unlimited” conjugal visits.
— Inquirer.net

PhilHealth mess magnifies ‘pervasive’ corruption in gov’t: PRRD
President Rodrigo Duterte on Monday stressed the prevalence of corruption in the country by citing the ghost claims that hounded the Philippine Health Insurance Corporation (PhilHealth) in the past months.
— Philippine News Agency

SONA best time for ‘The Big One’ quake, Duterte jokes
President Rodrigo Duterte on Monday said in jest that if The Big One will come, he would rather have it hitting the country during his ongoing State of the Nation Address (SONA).
— GMA News

Duterte vows to crack down on polluters of environment
President Rodrigo Duterte has vowed to destroy, if not burn, business establishments that pollute the environment.
— GMA News

Duterte wants PH establishments closed by midnight
President Rodrigo Duterte on Monday said he wanted Congress to pass a law that would require establishments across the country to close by midnight.
— Inquirer.net (video)

DA-Calabarzon implements measures vs. swine fever
The Department of Agriculture (DA) has assured the public it is implementing measures to prevent the entry or spread of African swine fever (ASF) and protect the hogs and swine sector in Cavite-Laguna-Batangas-Rizal-Quezon (Calabarzon) region from the disease.
— Philippine News Agency

4th SONA draws mixed reactions from Bicolanos
Bicolanos from all walks of life gave mixed reactions including hope for a better Philippines during President Rodrigo Duterte’s fourth State of the Nation Address (SONA) delivered at the Batasang Pambansa in Quezon City on Monday.
— Philippine News Agency

3-month jail term for pangolin traders
A court in Tagaytay City convicted three men of violation of the wildlife protection law after they were arrested last month for possessing 10 Philippine pangolins (Manis culionensis), of which seven had died before the rare and sensitive mammals were released back into the wild.
— Inquirer.net

Rising soon in Bicol: Safe, comfortable centers for evacuees
Thirty-one permanent evacuation centers are due to be completed in Bicol region before the year ends, giving families displaced by natural disasters safer and more comfortable areas to stay until they return to their home villages.
— Inquirer.net

Ban on small-engine bikes on tollway takes effect
Despite an agreement to defer the enforcement of a ban on motorcycles with an engine displacement of below 400 cubic centimeters on a portion of Osmea Highway, several riders were still apprehended on Monday by policemen.
— Inquirer.net

Sotto reelected as Senate President, lays down broad agenda
IN contrast to the long-drawn drama that characterized the choice of House Speaker, the 24-man Senate quickly picked its leader as the 18th Congress opened on Monday (July 22) hours before the President’s State of the Nation Address (Sona).
— Business Mirror

Cayetano elected Speaker, vows to push President Duterte’s agenda
HEEDING the endorsement of President Duterte, members of the House of Representatives on Monday elected Taguig Rep. Alan Peter Cayetano as new Speaker of the lower chamber, ending days of tension amid speculation that people close to the President would move to scuttle his dream despite the latter’s endorsement.
— Business Mirror

Anti-Duterte protesters burn Duterte effigy in rally denouncing PHL leader before start of SONA
While anti-government protests had always accompanied State of the Nation Addresses of Philippine leaders and usually denounced alleged US interference in the country’s government, this time protest rallies against President Rodrigo Duterte’s SONA centered on his friendship and closeness with China.
— Eagle News

Government, private sector push for disaster resilient enterprises in PH
Enterprise leaders and key representatives from the government, humanitarian sector, and business sector gathered last week for the 2019 National Summit on Strengthening MSME Disaster Resilience to highlight the need for enhanced efforts toward disaster preparedness for micro, small, and medium enterprises (MSMEs) in the Philippines.
— ReliefWeb

Duterte Promise Checklist: Major accomplishments, failures
With President Rodrigo Duterte about to give his 4th State of the Nation Address at the halfway mark of his term, it’s time to take a look at major accomplishments or failures during his presidency.
— Rappler

Duterte nudges Congress to fast-track creation of Department of Disaster Resilience
President Rodrigo Duterte on Monday said he intends to hasten the establishment of the government agency that would handle disaster issues in the country.
— GMA News

Isko Moreno threatens to fire all Manila traffic enforcers over viral extortion case
The mistake of one is the mistake of all.
— Rappler

Feature photo CAUGHT (UP) IN TRAFFIC