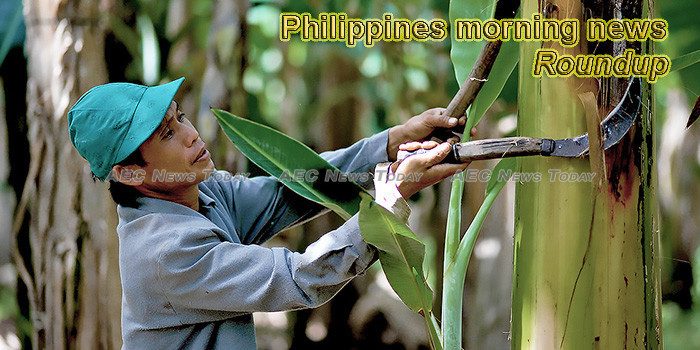 Bicam panel agrees on ‘re-prioritization’ funds’ cap at P200 billion
TO break the impasse on the proposed P3.757-trillion General Appropriations Act of 2019, the Senate and the House of Representatives have agreed to increase the cap of lawmakers’ fund “re-prioritization” to P200 billion from P50 billion.
— Business Mirror

Philippines, Vietnam biggest movers in 2018 corruption index
The annual report on state-level corruption by Transparency International contains few surprises for the Asean region. Singapore is still regarded as the nation with the least corrupt public sector in the region, while the kingdom of Cambodia once again brings up the bottom end of the list.
— AEC News Today

Duterte launches airstrikes on Abu Sayyaf after cathedral attack
The Philippines military has launched airstrikes against homegrown militant group Abu Sayyaf in the restive southern province of Sulu, just days after a splinter group staged a deadly twin bombing attack on a Catholi­c cathedral there.
— The Australian

Lawmakers move to spare infrastructure from poll ban as 2019 budget talks get back on track
LAWMAKERS making up the bicameral conference committee now hammering out the final version of the proposed P3.757-trillion national budget for 2019 have committed to ensuring ratification next week, with the measure containing a provision that would spare new infrastructure projects from the 45-day public works ban ahead of the May 13 mid-term elections.
— BusinessWorld Online

Activists ask Trudeau to act as Canadian trash continues to rot in Manila
More than 100 community and environment groups in the Philippines are making a plea to Prime Minister Justin Trudeau to take out Canada’s trash.
— The Province

Senate panels: Place erring minors in ‘reformatory center,’ penalize parents
The Senate Justice, Women and Finance committees have approved a bill which seeks to place all minors who commit serious crimes — like murder, homicide and rape — in a “reformatory center.”
— CNN Philippines

Foreigners carried out twin Jolo blasts
THE MILITARY now believes the twin explosions at Jolo Cathedral on Sunday were carried out by two foreign suicide bombers who came from Indonesia in December and linked up with the Ajang-Ajang subgroup of the notorious Abu Sayyaf.
— The Manila Times

PMO remits P1.8 B to BTr in 2018, surpasses target
The Privatization Management Office (PMO) remitted record contributions to the Bureau of the Treasury, surpassing its target for last year, owing to strong revenues from the sale of several government assets.
— Manila Bulletin

Fuel surcharge likely to decline by March 2019 — CAB
Air fares may start to decline in March due to the sustained decline in jet fuel prices in recent months, according to the Civil Aeronautics Board.
— The Philippine Star

South Asian firm to invest $50M for PH expansion
SOUTH Asian hotel-and-home chain OYO is set to spend $50 million in the next few years to expand its operations in the Philippines.
— The Manila Times

Cigarettes top haul of fakes
The National Committee on Intellectual Property Rights (NCIPR) has seized P23.6 billion worth of pirated and counterfeit goods in 2018, the largest haul since its creation in 2008 and an increase of 188 percent over 2017.
— Malaya

PH to become Asia’s next success story
Budget Secretary Benjamin Diokno said the Philippines will remain one of the fastest growing economies in Southeast Asia and in the world.
— Manilastandard.net

Need for speed: Carts on rails help Manila’s commuters dodge gridlock
Thousands of commuters flock to Manila’s railway tracks every day, but rather than boarding the trains, they climb on to wooden carts pushed along the tracks, to avoid the Philippine capital’s infamous traffic gridlock.
— ABS-CBN News

Delayed ‘Trabaho’ bill fine, but CIT must be cut faster PCCI
BUSINESS leaders are amenable to shelving the passage of the second fiscal reform bill until the next Congress, but said the reduction of corporate income tax (CIT) to 20 percent must be completed by 2024.
— Business Mirror

Comelec issues social-media spending rules
The Commission on Elections (Comelec) will start regulating social media and web site use for election campaigns this month, but the poll body will monitor only the cost and not the content.
— Business Mirror

House limits access to info on lawmakers’ SALNs
The House of Representatives will require any journalist or interested party to pay a P300 fee to obtain a copy of the statement of assets, liabilities and net worth (SALN) of any of its members.
— The Philippine Star

If true, Panelo says he sees nothing wrong with China building maritime center on disputed Kagitingan Reef
Presidential Spokesperson Salvador Panelo on Thursday, Jan. 31, said he does not see anything wrong with China building a maritime rescue center in Fiery Cross Reef, one of the features claimed by the Philippines in the disputed South China Sea, if this was indeed true.
— Eagle News

Comelec alarmed by spate of poll-related violence
MANILA, Philippines – The Commission on Elections (Comelec) is alarmed by the spate attacks against candidates in upcoming midterm elections.
— Inquirer.net

Doctors unite to oppose bill lowering age of criminal liability
The country’s leading alliances of pediatricians, child psychologists, psychiatrists, neurologists, and medical specialists have united to express their strong opposition to the bill seeking to lower the minimum age of criminal responsibility from 15 years old to 12.
— GMA News

Over 4,000 campus journos join 2019 NSPC in Pangasinan
Some 4,960 campus journalists from across all regions are participating in the National Schools Press Conference (NSPC) from January 28 to February 1 hosted by the Department of Education (DepEd)-Pangasinan I Schools Division in this town.
— Philippine Information Agency

Mixed relay race to make SEAG debut
The mixed gender relay race in athletics debuts in this year’s 30th Southeast Asian Games that the country is hosting from late November to December.
— Tempo

CEO confidence in growth dips dramatically
What difference a year makes. Nearly 30 percent of business leaders believe that global economic growth will decline in the next 12 months, approximately six times the level of 5 percent last year – a record jump in pessimism.
— The Manila Times

Landbank extends offer to by PDS stakes to March 15
State-owned Land Bank of the Philippines (Landbank) extended anew the deadline set on its offer to buy out several Philippine Dealing System Holding Corp. (PDS) shareholders to March 15, in its bid to gain controlling stake of the exchange.
— Philippine News Agency

Ernesto Pernia: Upper-middle income status still within reach in 2019 for economy
Despite prevailing uncertainties in the global economy and a high interest rate environment, the Philippines can still hurdle its goal of becoming an upper middle income economy this year, said Socioeconomic Planning Secretary Ernesto Pernia.
— The Philippine Star

Health advocates to reject sin tax hike below P60
Health advocates will reject “anything” below the P60 increase in the sin tax on cigarettes based on the proposal by Senator Manny Pacquiao, citing the Department of Finance preliminary model.
— Manilastandard.net

300 families flee as troopers clash with Ajang-Ajang
Fighting broke out between government troops and members of the Abu Sayyaf-affiliated Ajang-Ajang in Patikul, Sulu Thursday morning, sending more than 300 families fleeing from their homes.
— Manilastandard.net

Vietnam Morning News For May 21