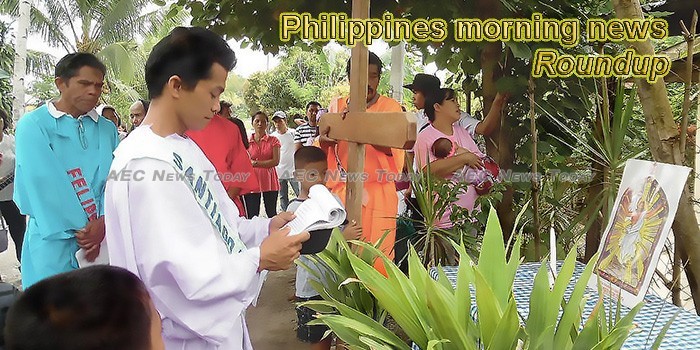 Groups want release of 11 Negros villagers
Farmers’ and human rights groups on Monday called for the release of 11 villagers who were arrested during the military-backed police operations in Negros Oriental province on March 30 where 14 farmers were gunned down.
— The Inquirer

Remittance growth slowest in six months
MONEY SENT HOME through banks by Overseas Filipino Workers (OFWs) — which fuels household spending that, in turn, contributes nearly 70% to gross domestic product — grew in February, according to data the central bank released on Monday, but at the slowest pace in six months due to what one …
— BusinessWorld

Antique eyes malaria-free status
The province of Antique is looking towards being declared as malaria-free, after 11 years of not having any case of the mosquito-borne disease.
— Philippine News Agency

Lawyers group seeks SC help, protection from military harassment
An organization of human rights lawyers on Monday sought the Supreme Court’s protection from alleged continuing harassment and “red tagging” of their members by the military and the police.
— The Inquirer

Pampanga painter to be crucified for 33rd time
Ruben Enaje is not yet throwing away his steel nails or white robe. On April 19, Good Friday, he is going to be crucified, his 33rd time to do the painful practice, as his thanksgiving offering as well as sacrifice.
— The Inquirer

Are there enough funds to implement the UHC law?
From time to time, my medical colleagues and I would mull the future of universal health care (UHC) which President Duterte recently signed into law. At the turn of the century, many were talking about it already, but we thought it could not be achieved in our lifetime.
— The Inquirer

HOLY WEEK TRADITION PHILIPPINES: What Filipinos Usually Do During Holy Week
Here is an overview of what the Filipinos usually do during the Holy Week. The Philippines is among the countries that usually have remarkable observance of religious events.
— Philippine News

Labor-backed Senate bets find PSA’s P10-k survival budget ‘deceptive’
Candidates backed by labor groups on Monday branded as deceptive and counter-productive the recent report of the Philippine Statistics Authority (PSA) on poverty incidence and how much money a family needed a month to escape getting considered poor.
— GMA Network

MisOr sees tourist influx in Lent for faith tourism
Influx of tourists in the province of Misamis Oriental this Holy Week 2019 is seen to flock for the faith tourism destinations catering to devotees and pilgrims.
— Philippine Information Agency