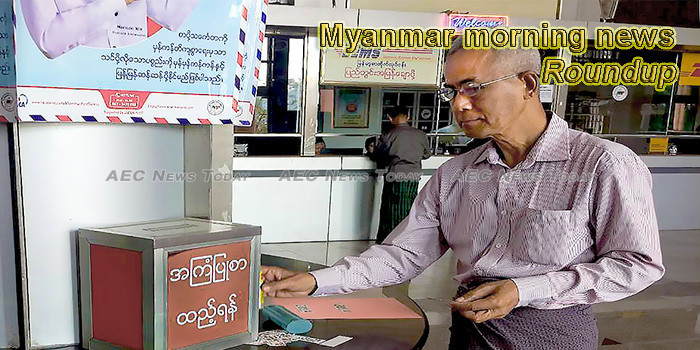 Deal to Be Signed for BRI-Related Economic Zone in Myanmar’s Kachin State
The agreement due to be inked next month would push forward the implementation of the US$440 million Myitkyina Economic Development Zone amid fears of land grabs.
— Irrawaddy

Mining to resume at suspended jade blocks
Jade mining at private blocks in Lonekhin and Hpakant, Kachin State, which had been temporarily suspended since July, have been permitted to resume this month, according to Myanmar Gems Enterprise, which is under the Ministry of Natural Resources and Environmental Conservation.
— Myanmar Times

Experts say 70% of nation’s coral reefs are damaged
Local and foreign experts have warned that the country’s coral reef cover has declined by 70 percent, but the actual figure is difficult to ascertain because of a lack of data.
— Myanmar Times

TNLA Reports 130 Clashes with Burma Army This Year
The Ta’ang National Liberation Army (TNLA) has clashed with Burmese government forces more than 130 times since the start of this year, according to the head of the group’s information department.
— BNI Online

21 Muslims from northern Rakhine state jailed
A court in Myanmar’s Ayeyarwady region sentenced 21 Rohingya Muslims from northern Rakhine state to two years in jail for trying to travel to Yangon and beyond without approved travel documents under a controversial immigration law. Eight youths arrested with them were sent to a juvenile detention centre, RFA reported.
— Mizzima

Woman Sentenced to 80 Years for Human Trafficking in Myanmar’s Shan State
A woman in Shan State has been found guilty of human trafficking after four victims who were trafficked into China escaped, returned to Myanmar and opened cases against her.
— Irrawaddy

70 Japanese Hospitality Jobs Offered to Myanmar Applicants
The Japanese Embassy in Yangon is holding tests on Oct. 27 to fill 70 jobs from 250 applicants.
— Irrawaddy

Door2Door looks to the future
Six years after launching Yangon Door2Door online food ordering and delivery service in 2013, Shady Ramadan is thinking big. With the business thriving in Yangon and Mandalay, it expects to turn a profit this year, and plans are afoot for a mobile application to provide same-day pick-up and delivery of everything from groceries to documents.
— Myanmar Times

Bare knuckles to KO record for Myanmar woman breaking MMA mould
Myanmar’s Bozhena Antoniyar had to side-step conservative parents to take up bare-knuckle fighting, but her stealth paid off on her MMA debut when she knocked out her opponent in a record 24 seconds.
— Channel NewsAsia

Myanmar Submits Draft of Mrauk-U World Heritage Bid to UNESCO
Myanmar is pushing its bid for Mrauk-U, the seat of the ancient Arakan kingdom, to be added to the UNESCO World Heritage List despite ongoing violence in the area.
— Irrawaddy