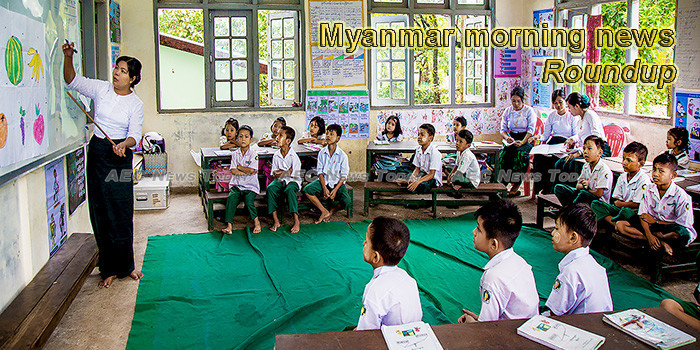 Can the ICC bring justice to Myanmar?
More than 700,000 men, women, and children, many identifying as Rohingya, crossed the border from Myanmar’s Rakhine State into Bangladesh in 2017, fleeing violence at the hands of the military and security forces.
— Lowyinstitute

Govt urged to make better use of remittances from abroad
Ko Win Soe sat behind the counter of his hole-in-the-wall drink shop near a market in the 5th ward of Hlaing Tharyar township in Yangon.
— Myanmar Times

Myanmar citizens root for democracy and continued reforms, according to survey
Myanmar citizens’ faith in democracy is unwavering and a vast majority believes it is the only route available for enhancing the well-being and welfare of the people.
— Mizzima

Dengue death toll surpasses 100 in Myanmar in 9 months
The total death toll of Dengue Hemorrhagic Fever (DHF) has risen to 107 in Myanmar in the first nine months this year, according to the figures released by the Ministry of Health and Sports on Thursday.
— Xinhua

Toyota to begin auto assembly in Myanmar in 2021
Myanmar-Japan Thilawa Development Company has got 21 hectares of land in Thilawa Special Economic Zone (SEZ) to establish a car assembly plant and start manufacturing autos in 2021.
— Eleven Myanmar

Chin State MPs say distribution of regional budget is unfair
Chin State, the poorest state of Myanmar has been allocated a budget of K155.7 billion for fiscal 2019-20, which commenced October 1.
— Myanmar Times

HAGL opts out of Myanmar project
HAGL, once a leading real estate firm in Vietnam, has sold its largest project stake in Myanmar to compatriot auto firm Truong Hai.
— VnExpress

Six Rohingya Arrested Without Travel Documents in Magwe
Six Rohingya, including two teenagers, have been jailed in Magwe Region because they lacked permission to leave their Rakhine State township.
— Irrawaddy

IPRD receives Hluttaw-related materials for its community centres
The Pyithu Hluttaw handed over 6,175 books and brochures and 1,300 posters on the Hluttaw to the Information and Public Relations Department with a ceremony at the Ministry of Information yesterday.
— The Global New Light of Myanmar

Mandalay tells squatters to vacate monastery compound
Local religious authorities ordered people living illegally at a monastery in Mandalay to vacate the premises before the Thadingyut Festival, which will be celebrated on October 13 to mark the end of Buddhist Lent.
— Myanmar Times