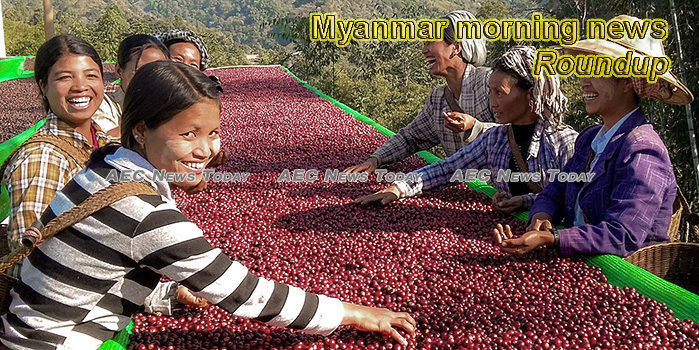 Transport and communications sector stands fourth on FDI list
During 31 years, the total FDI inflow into the transport and communications sector reached nearly 11 billion US dollars, standing at 4th place among 12 economic sectors, according to the figures released by the Directorate of Investment and Company Administration (DICA).
— Eleven Myanmar

Myanmar Angers Coal Region Residents by Extending Life of Polluting Chinese-run Mine
Residents of Tigyit village tract in Myanmar’s northern Shan state are up in arms over the central government’s decision in August to extend the operation period of a Chinese-owned coal-fired power plant that they say has exceeded land use specifications, severely polluted the local environment, and jeopardized their health and their livelihoods.
— Radio Free Asia

Myanmar Express Logistics Market is Expected to Cross USD 30 Million by 2023: Ken Research
It is expected that by 2022, 48% of the population in Myanmar will be earning more than USD 120 per month. This is expected to increase sales of FMCG, Fashion and Food products, which are major contributors to express logistics business.
— Markets Gazette

Gas from block A6 to commercially viable in 2023
Commercial gas production will commence at the A6 block Shwe Yee Htun-2 discovery, offshore Myanmar, in 2023, U Zaw Aung, a retired director general of the Oil and Gas Planning Department under the Ministry of Electricity and Energy (MOEE), told The Myanmar Times.
— Myanmar Times

649 kg of ICE drugs seized from sea off southern Myanmar
Myanmar authorities seized 649 kg of methamphetamine (ICE) from sea in Myanmar’s Ayeyarwady region, according to the Home Affairs Ministry on Thursday.
— Xinhua

Myanmar awards LNG-to-power projects amid tight deadline
The H1 2020 date set for VPower Group to bring the facilities online seems unrealistic, with the deadline having scared away more-established bidders.
— Interfaxenergy

Myanmar VP calls for producing safe food, developing rural living standard
Myanmar Vice President U Henry Van Thio has called for working towards the production of food safe for consumption and the development of living standard in rural areas to properly feed the growing population and nurture the future generation into healthy and able-bodied citizens.
— Xinhua

The World Bank’s Latest Report on Myanmar: 5 Takeaways on Growth and Risks
A new World Bank forecast for East Asia and the Pacific suggests Myanmar will likely see economic growth in the near future despite internal and external risks.
— Irrawaddy

Health access denied in northern Rakhine
Massive shortfalls in government services, blocks on NGOs and travel restrictions for residents continue to starve communities in northern Rakhine State of access to healthcare and flout the recommendations of the Kofi Annan commission.
— Frontier Myanmar

Plan to Build Statue of Myanmar Independence Leader Angers Chin Ethnic Group
Ethnic Chin groups in western Myanmar have expressed opposition to a Chin state government proposal to erect statues of three past ethnic leaders to appease public displeasure over a plan to put up a statue of the country’s independence hero in a perceived attempt to “Burmanize” the minority group.
— Radio Free Asia

Timeline: Irregularities & Significant Events in Myanmar’s Toddler Rape Case
To provide an overview of what has gone wrong with the ‘Victoria’ child-rape case, The Irrawaddy presents a timeline of key events since the crime occurred in May.
— Irrawaddy

AA Claims Myanmar Military Deploys Helicopters After Taking Major Losses
The Arakan Army claims the Myanmar military has suffered over 40 casualties in the past week and local residents say the army has now deployed helicopters in the area.
— Irrawaddy

Myanmar football teams to take on host Philippines in SEA Games
Many Myanmar athletes are busy preparing and practising for the 30th South East Asian Games to be held in the Philippines from November 30 to December 11.
— Myanmar Times

Dialogue as a tool in peacebuilding and conflict management
The ability to resolve conflict through dialogue rather than violence, is an essential skill for Myanmar to build in order to reach a lasting peace. Dialogue needs to take place not just through the country’s Framework for Political dialogue, but at the community level too, where the impact of conflict is often felt most harshly.
— Reliefweb

With just five stocks listed on Yangon, Myanmar sets out to launch second exchange
Myanmar plans to set up a second board next year that foreigners can trade on to bolster its moribund stock market.
— DealStreetAsia

The Day Myanmar’s Independence From Britain Was Agreed
On this day in 1947, the prime ministers of Myanmar and Britain signed the treaty by which Myanmar would gain its independence.
— Irrawaddy