Myanmar morning news for May 30 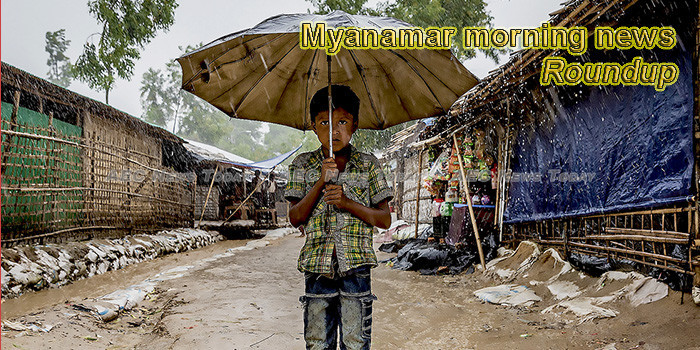 Emergency power plans impossible without price rises: official
Electricity prices need to rise before the government can move forward with plans to meet demand for next hot season, a senior Ministry of Electricity and Energy official says.
— Frontier Myanmar

Illegal jade trade still thriving despite mining suspension
Myanmar jade is still being smuggled across the border to China in large quantities despite the government having suspended new licences for two years now, U Zaw Bo Khant, vice chair of the Myanmar Gems and Jewellery Entrepreneurs Association said at a gems forum last week.
— Myanmar Times

Yangon Sangha Council Cancels Meeting with Firebrand Monk
Clerical body had summoned U Wirathu for involvement in secular affairs due to his participation in Yangon rally.
— Irrawaddy

Initial technical report on Muse-Mandalay railway project submitted
A technical report that is a part of a feasibility study being conducted on the Muse-Mandalay railway as part of the China-Myanmar Economic Corridor has been submitted to the government, according to Myanma Railways and the Ministry of Transport and Communications.
— Myanmar Times

USDP and Military Propose 4 New Charter Amendments
This is the second move by USDP and military lawmakers to have their own amendment bill considered by Parliament in parallel with the NLD’s constitutional amendment efforts.
— Irrawaddy

UNHCR, UNDP, Myanmar extend memo by 1 year
The government of Myanmar, UNDP and UNHCR have extended a memorandum of understanding on repatriation of the Rohingyas for one year following an agreement between all parties.
— Newage BD

Myanmar Investment Commission approves the projects in energy storage and distribution, telecommunication services and education services
The Myanmar Investment Commission (MIC) meeting (8 / 2019) was convened at the meeting room of MIC in the morning on 29th May 2019 in Yangon. U Thaung Tun, Chairman of MIC, Dr. Than Myint, Vice Chairman of MIC and (9) members attended the meeting.
— The Global New Light of Myanmar

Risk still outweighs reward in Myanmar markets
Soon after Myanmar’s de facto leader Aung San Suu Kyi started her second year in office in 2017, then-finance minister Kyaw Win proclaimed that the economy was like an airplane at full throttle on a runway “ready to take off.”
— Asia Times

Myanmar heatwave kills dozens of rare star tortoises
Dozens of Burmese star tortoises, an endangered species found only in Myanmar, have died at a sanctuary in Magwe Region due to the extreme heat of the past few weeks, a conservation official said.
— Myanmar Times

MoP&F will use Dutch loans for Pyigyidagun Tsp water supply, says Deputy Minister
A project that will provide 7 million gallons of water per day to the 70 per cent of Pyigyidagun Township, Mandalay Region, that are not connected to a water supply system, will be implemented using loans from Dutch based Netherlands Development Finance Company (FMO) and ING Bank and financial.
— The Global New Light of Myanmar

EII Pilot Project launched in Mandalay
The EII Pilot Project, a joint effort by the Ministry of Labour, Immigration, and Population and ILO-VZF was launched at the Yadanarbon Supercenter in Chanmyathazi Township of Mandalay. U Myo Thit, the Mandalay Region Minister for natural Resources, Environmental Conservation and Labour,
— The Global New Light of Myanmar

Rohingya refugee, four others arrested in Bandarban
A Rohingya woman refugee from Myanmar and her four Bangladeshi accomplices were arrested on Tuesday as she attempted to obtain Bangladeshi passport from passport office in Bandarban.
— The Daily Star

Dr. Ba Maw, Facilitator of Myanmar’s Struggle for Independence
During his lifetime under British and Japanese rule, Dr. Ba Maw held several important roles in Myanmar’s leadership and supported the people and the independence movement.
— Irrawaddy